Editor’s note: This story is part four of the feature series “South Africa side by side with nature,” which explores two South African landscapes where doing right by nature and doing right by people are the same. Text by Jamey Anderson. See the whole series here.

Traditional herders in South Africa name their Nguni cattle with evocative, almost fanciful names that interpret the color and pattern of the animals’ markings: “Red sorghum sprinkled on masi (sour milk).” “Eggs of the lark.” “Stones in the river.” “Gaps between the branches of trees.”

The names point to the deep significance these animals hold in traditional cultures. For Sissie Matela and Nicky McLeod — cofounders of Environmental and Rural Solutions — that enduring reverence raised questions about the viability of holding commercial livestock sales in these communities.

“Some people thought that rural people would never sell their cattle commercially,” McLeod recalled. “The cattle were too important to tradition.”

But by working within cultural traditions — specifically, by revitalizing an age-old herding tradition called maboella — Matela and McLeod have made lasting allies.

“It was actually complementing that cultural value that made it work,” said McLeod.

Sinegugu Zukulu, Conservation South Africa's Eastern Cape Landscape Manager, shares the story of the Meat Naturally Initiative. This innovative partnership in Africa’s most biodiverse grassland is benefiting the community and nature through cattle.

For Matela, focusing on culture was more than just a hunch. As a young girl raised in Lesotho, she saw the power of traditional knowledge first hand.

For Matela, it was the enforcement of a community ethic in different terms. “In Lesotho, there isn’t a can on the road, there isn’t a plastic bag because people are still practicing a lot of culture.”

Communal use of shared resources commonly results in the classic economic scenario known as the tragedy of the commons. In academic parlance, it is a collective-action problem: a situation where no single party alone has an incentive to behave in the interest of the common good. For communal rangelands, it means that individual farmers have no reason to look after the health of the common resource in the long-term. If they do not graze the land, someone else will.

This problem has been solved in two ways. In the first, land is privatized and divided among individual owners who have the right to exclude the use of others. In this scenario, the interest of the farmer aligns with the interest of the land. In the second, land remains public but is governed by a single authority charged with keeping individual motives in check. When that authority falters, the land suffers.

In the Xhosa and Sotho cultures that share this landscape, cattle ranching and communal use of the land is as old as the cultures themselves. Archeologists believe that domesticated cattle were first brought to northern Africa from the Middle East around 10,000 years ago. When the Nguni people — ancestors of the Xhosa tribe — and the Sotho-Tswana people — ancestors of the Sotho tribe — migrated to southern Africa in waves beginning nearly 2,000 years ago, they brought their cattle with them.

In previous times, both the Xhosa and Sotho people followed a traditional system of grazing known as maboella, a form of rotational resting practiced by herdsmen and enforced by tribal governments. Grazing under this system mimicked the movements of wildlife that once roamed this land. Today, piles of rocks — similar to cairns on a hiking trail — stand sentinel in the Drakensberg Mountains, still marking the former boundaries of these managed grazing areas.

During the disruption and strife of the apartheid era, these traditional ways were lost, and the range suffered severely as a result.

“It is a legacy of mismanagement and disrespect — a breakdown in people’s traditional governance systems by being forced around,” said McLeod. “Our approach is that you can’t actually restore the landscapes without restoring the governance and the institutions systems — and that means restoring people’s self-esteem as well.”

Rebuilding a sense of pride for rural people is an ongoing project for the nonprofit partnership in Matatiele, one that pushes against demographic and cultural change. In a country where two-thirds of the population now lives in an urban area — up from roughly half a generation ago — cities drive the economy, government and culture of the nation. Villages, by comparison, are left behind.

Though the villages around Matatiele are some of the poorest in South Africa in monetary terms, quality-of-life indicators like hunger, crime and health are better than in many of the townships that ring major cities. And yet, people continue to move to the crowded cities, and rural life is little respected.

“In the rural areas of South Africa, people aspire to be urban people,” Matela said. “They have completely lost their identity because it is not cool to be rural. That is when we said, let’s look at our culture.”

For Matela, working to provide a brighter future for rural people is her life’s work. “I grew up in a very rural area. And so, for me, making sure that there is life in a rural area is part of who I am. It is not a job.”

Rallying a community for security

In Ward 14, a collection of Sotho villages mere kilometers from the Lesotho border, livestock raiders from the impoverished mountain kingdom have long posed a threat to lives and livelihoods. Working collaboratively to address this threat has become a common cause for the community and conservationists.

Ever since Lesotho resisted unification with the Union of South Africa in 1910, a neighborly tension has existed between the Sotho speakers of the Eastern Cape and their brethren to the north. This tension only grew as South Africa gained wealth that went unmatched in the mountain kingdom.

Herders from Lesotho come to Ward 14 for employment, sometimes returning home with valuable intelligence on the grazing patterns and security measures of the communities. The conflicts have been violent, and villagers have been killed in past raids. That is, until the community organized itself for better rangeland management.

Now, five years have passed since the last successful livestock theft, an improvement that Raymond Nkopane attributes to the new cooperative grazing practices.

A herder of cattle in Ward 14 for 30 years, Raymond is an eco-ranger and a leader in the local grazing association supported by Environmental and Rural Solutions, Conservation South Africa and their partners.

“What we are doing as eco-rangers is to make sure that they are grazing in a better way. This helps prevent theft,” he said.

As the herders worked together to institute rotational resting, the cattle became easier to guard as they occupied the same pastures at the same time. Along with the new grazing system, villagers have established patrols to guard against raiders. Clearing invasive wattle trees also helped remove hiding places for stalking thieves.

Addressing a core community need like security was the foot in the door that Raymond needed with village traditional leaders and livestock owners. “They respect me, especially because they know that I too was a herder,” he said. “They listen.”

The Umzimvubu River flows from the peaks of the Drakensberg Mountains through the villages around Matatiele and into the Indian Ocean. In total, the river drains some 20,000 square kilometers (8,000 square miles) of grasslands, farms and forests — an area the size of the state of New Jersey. It spans one of the most biodiverse grasslands in South Africa, an ecosystem home to otters, jackals and a menagerie of Afrikaner etymology: aardwolves (“earth wolves”), rheboks (“deer bucks”) and dassies (“small badgers”).

Protecting a landscape — from source to sea

For Sinegugu Zukulu, Conservation South Africa’s program manager for the Umzimvubu landscape, integrating conservation into the lives and needs to a community is about more than just durability. It’s about expansion.

“Taking the rural people to a state where they could make these changes on their own, I think that that’s where we are,” he said. “We as NGOs often raise funds to work in communities. If we could get to a stage where we could work with communities without investing money into those communities, that is the day we will have achieved sustainability with what we are doing.”

For Zukulu, the work being done around Matatiele is just the beginning for a landscape that stretches to the Indian Ocean. “We need to go all the way down to the coast,” he said. “It is a very big challenge, an ambitious challenge. But if we have enough resources on the ground and those resource are coming from the community, it is possible.”

For now, the NGO partnership in Matatiele is focused on rehabilitating the upper catchment, returning functionality to the wetlands and making the Umzimvubu watershed the world-class wildlife habitat it once was.

Worldwide, 80 percent of grasslands have been converted to crop land and other uses. “We’ve put it in our minds that they are expendable,” said Nicky McLeod. “They are the basic substrate, and we cannot afford to lose them.”

Home to the country’s biggest functional wetland system, the catchment provides water to one million people, making the region a buffer between people and the impacts of climate change on rainfall and temperature.

“I would love to see a climate-resilient community here,” said Sissie Matela. When bridges are washed away in the district, the government classifies the disaster as an act of God, rather than an effect of runoff and land degradation. “I have been talking to the government and saying, ‘Most of these things that you call disasters are not disasters if you manage the landscapes and you manage the environment.’”

A common refrain among conservationists is that the biggest export from Matatiele is topsoil, the result of overgrazing, erosion and the silting of rivers. When dammed reservoirs downstream collect this silt and lose their water-storage capacity, the government builds those dams higher rather than dealing with the upstream land-use practices that produces the silt in the first place. Meanwhile, it takes rangelands 500 years to bring back one inch of topsoil.

The region has recently been put under further threat from shale oil and gas development made possible by hydraulic fracturing. It is a story rural South Africans have seen before. Mining jobs are relatively few, and revenues often fail to enrich the local community. But the mess belongs to everyone.

“It would just completely trash our water storage, and we’re totally dependent on ground water up here,” said McLeod. Some see gas development as an economic silver bullet, but McLeod rather sees a short-term benefit for a few.

Matela envisions a different future. “If we restore those wetlands to ensure that they produce clean water, they produce green grass, then we are going to use them for a very, very long time.” 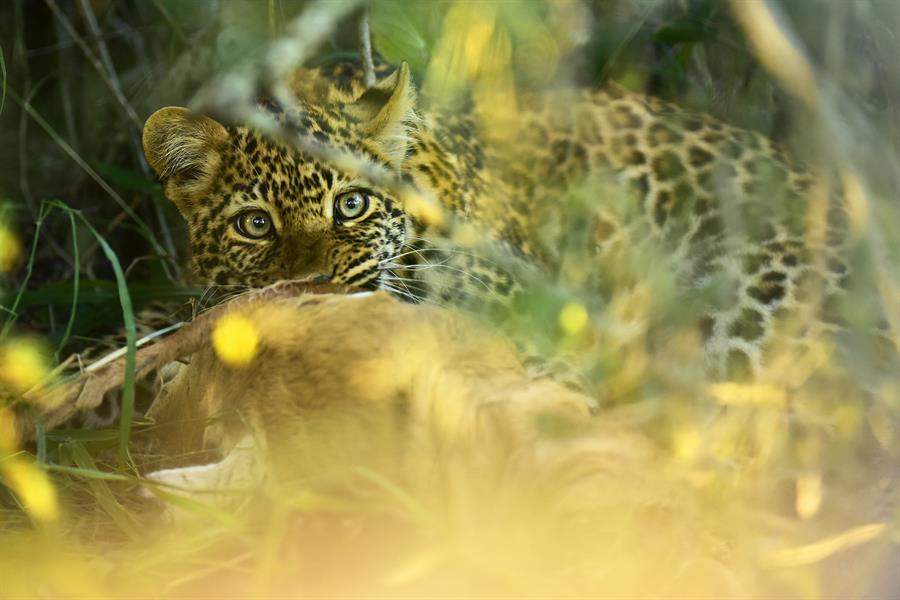 In this five-part series, “South Africa side by side with nature,” writer Jamey Anderson and photographer Trond Larsen explore two South African landscapes where doing right by nature and doing right by people are the same.

Protect Nature
Your donation will help us reach our ambitious $75,000 Earth Day goal by April 22.
Donate Now
Continue to conservation.org