What you need to know about the Paris climate talks: 3 questions for Shyla Raghav

Editor’s note:The U.N. has committed to carrying on with the upcoming climate change negotiations in Paris despite the November 13 terrorist attacks in the city. In the words of French Prime Minister Manuel Valls, the conference” will be held because it’s an essential meeting for humanity.”

When the 2009 meeting of the U.N. Framework Convention on Climate Change in Copenhagen failed to produce the expected global climate change agreement, participants created a new deadline of 2015. As such, hopes are high for December’s 21st Conference of the Parties (COP 21) meeting in Paris to deliver an actual plan of action. CI Climate Policy Director Shyla Raghav explains what’s at stake — and the likely outcome.

Question: What’s preventing this meeting from becoming “another Copenhagen”?

Answer: I think it’s possible, but I do not think it’s likely. The world is a different place than it was six years ago. Among both governments and the general public, there is a greater level of awareness and concern about climate change and the serious threat it poses to life as we know it.

As climate impacts — from prolonged droughts to stronger storms to rising seas — continue to take hold, more communities, businesses and countries are seeing that this isn’t a future problem. Changes are happening now, and they require immediate solutions. I think people are also realizing that fighting climate change isn’t just about mitigation, or reducing emissions; climate change adaptation must be integrated into economic development in order to help people adjust to new conditions and minimize negative impacts.

Of course, there is still to some degree a lack of trust between developing and developed countries as they continue to disagree over responsibility and the level of commitment that should be expected from developing nations. Some developing countries may feel that if strong financial commitments and leadership from developed countries don’t materialize, they’re willing to walk away without an agreement. On the other hand, collaborations between countries like the U.S. and China, the U.S. and Brazil, Germany and India, have demonstrated that there’s increasing political will from many influential players, and it’s likely that other countries will follow suit.

Q: How are countries preparing for the Paris COP meeting?

A: Each country participating in the COP is submitting a national climate target called an intended nationally determined contribution (INDC). The parameters of these commitments vary by country. For example, the U.S. has put forward an economy-wide target that aims to reduce the total level of emissions 26-28% below 2005 levels by 2025. India has opted for a target that aims to reduce emissions not by an absolute amount, but per unit GDP; its goal is a reduction of 33–35% below 2005 levels by 2030. China, on the other hand, has a peak target; the country has pledged to stop increasing its emissions by 2030.

The strength of these country targets is that their flexibility allows for a more inclusive agreement in which countries can contribute what they can. The down side is that there is less incentive for them to do their best. It also makes it harder to compare across countries, since they’re using different benchmarks and accounting rules.

At this point all developed nations and three-fourths of developing countries participating in the negotiations have submitted plans so far, in varying levels of detail. A synthesis report from the UNFCCC analyzing the INDCs has provided an indication of the overall aggregate impact they will have. So far it looks like they will really only limit us to 2.7 degrees of warming, and the scientific community has found that we need to be at 1.5 or 2 degrees in order to avoid catastrophic warming.

It’s clear that the INDCs alone are not enough. The question that follows is how do we complement or strengthen the individual commitments made by countries. 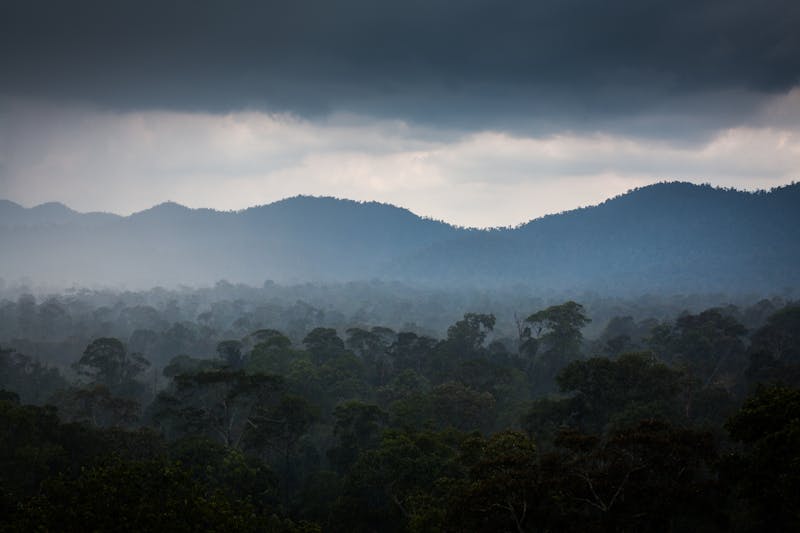 A rain squall passes over Malaysia’s Pasoh Forest Reserve. Protecting forests and other ecosystems is crucial in order for humanity to adequately reduce and adapt to the impacts of climate change. (© Benjamin Drummond)

Q: What’s the minimum that needs to happen in Paris?

A: Of course we need an agreement to be adopted that every country can be comfortable with. I think the bare minimum is to have an agreement that can act as an anchor for the INDCs — something that creates the rules for which they will operate. Because without some sort of international agreement, the INDCs are meaningless; they have no ability to be implemented, compared or measured over time.

CI is also advocating that the new agreement recognizes that nature can provide up to 30% of global mitigation and adaptation solutions. The agreement made in Paris will likely be very short — probably about 20 pages in total — so it’s unlikely that it will include specifics, but we need to at least create the enabling conditions through which nature-based measures in the land-use sector can be implemented.

And of course, we need the money to do all of this. That’s really been the crucial missing piece for climate action over the past decade. We have the solutions and the ideas, but the financial resources have not been delivered. We need some sort of financial commitment — from donor countries as well as the private sector — and the creation of markets and other tools to deliver the resources. For mechanisms like REDD+ to work, there has to be an international carbon market. So we want to make sure that whatever system is created encourages the transfer of carbon credits between countries.

The way I see it, this agreement is really just a foundation — a basis upon which we can coordinate a broader set of actions that will complement what governments themselves are willing to do. I think the hardest thing about working in climate change policy is that there are very high expectations of this agreement to deliver a comprehensive solution. But although it’s a global problem, it manifests locally, and it requires local responses.

Climate change is too big of a problem to rely entirely on governments to solve. Citizens have a role to play, as do companies. Right now the private sector is making a lot of commitments, but they’re not sufficiently linked to broader efforts. I think this is an opportunity to make sense of all the corporate commitments, as well as commitments made at the subnational level — cities, states — to determine how all of these little pieces connect to the bigger picture.

Cover image: From November 30 to December 11, 2015, Paris is hosting the U.N. climate talks. The meeting is expected to result in a global plan of action for fighting and adapting to climate change. (© Damien Roué/Flickr Creative Commons)