What camera traps reveal about how Colombian communities use forests

Yesterday we announced a big milestone for CI and our supporters: more than 1 million uses of the #NatureIsSpeaking hashtag on social media. This means that HP will donate US$ 1 million to CI, primarily funding our work through the Tropical Ecology Assessment and Monitoring (TEAM) Network. 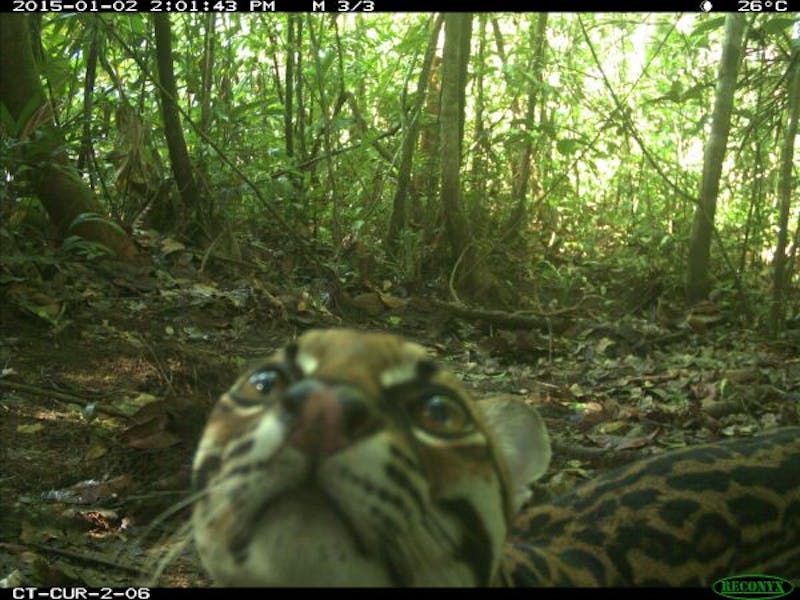 Ocelot caught on camera in Curare, Colombia, where CI and partners are kicking off a project using camera traps to monitor the density of large animals, many of which are important food sources for indigenous communities in the region. (Photo courtesy of CI Colombia/ASSETS)

At 17 sites across the world’s tropical forests, TEAM researchers use camera traps and other technology to gather ecological data that can be used for a variety of purposes, from discouraging poaching to managing threatened species in protected areas, and even helping to predict earthquakes.

Today’s blog from Jorge Ahumada shares another interesting way we’re using TEAM data to listen to nature in Colombia. (Jorge will be doing a Facebook chat about TEAM this Thursday, answering as many reader questions as possible. Check it out from 1-2 p.m. EST — and in the meantime, feel free to leave a question for Jorge in the blog comments.)

If nature were classical music, tropical forests would be Beethoven’s Ninth Symphony.

Tropical forests are the most complex, diverse and grand natural systems on the planet. Globally, one in four people depend on them for their livelihoods. But the question still remains: How do all the services that these forests provide actually make life possible for the people who live there? 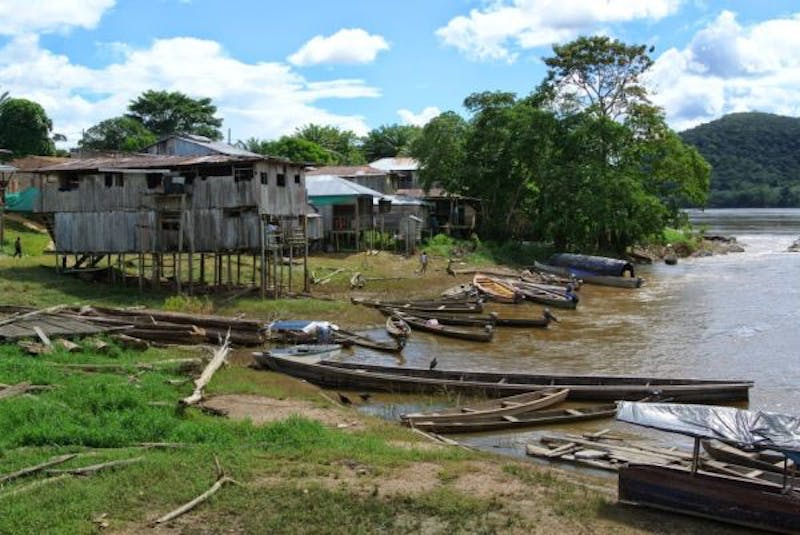 Boat landing area in La Pedrera, on the lower Caquetá River in the Colombian Amazon. This town serves as the gateway to the region’s indigenous communities, both in terms of outside visitors and the transportation of goods. (© CI/Miroslav Honzák)

One place we are looking for answers is in the Colombian Amazon, home to hundreds of indigenous and local communities that have depended on the forest for centuries. There, TEAM is working with other CI researchers in a unique collaboration to measure the relationship between ecosystem services, food security and nutritional health in rural villages.

As Erwin Palacios, Amazon manager at CI Colombia, explains, “We are interested in measuring and monitoring the density of large vertebrates like tapir, agoutí and black curassow in the forest. They are an important food source for indigenous communities in the lower Caquetá River. This is where the camera traps are invaluable to us — we can assess vertebrate populations in a quantitative way, rather than just guessing.” 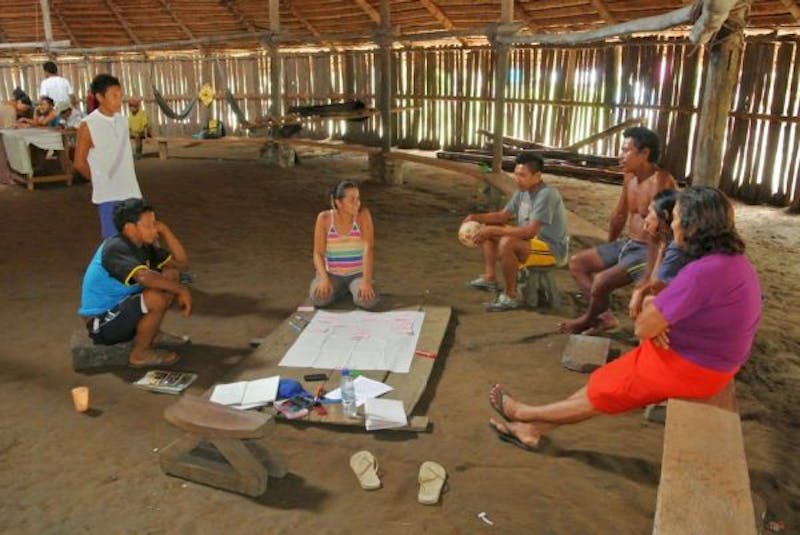 “What’s cool about this is that the information can then be used to estimate current and future stocks of animals that are being hunted and determine food security in these communities,” says Miroslav Honzák, senior science director at CI’s Betty and Gordon Moore Center for Science and Oceans.

“Ultimately, when combined with studies from other forests, this research could benefit up to 550 million people worldwide living in areas where forests and agriculture meet,” Miroslav adds.

The project is kicking off in the 150-person indigenous community of Curare, where CI Colombia is finishing the deployment of the first set of camera traps and has obtained images that will serve as a baseline. 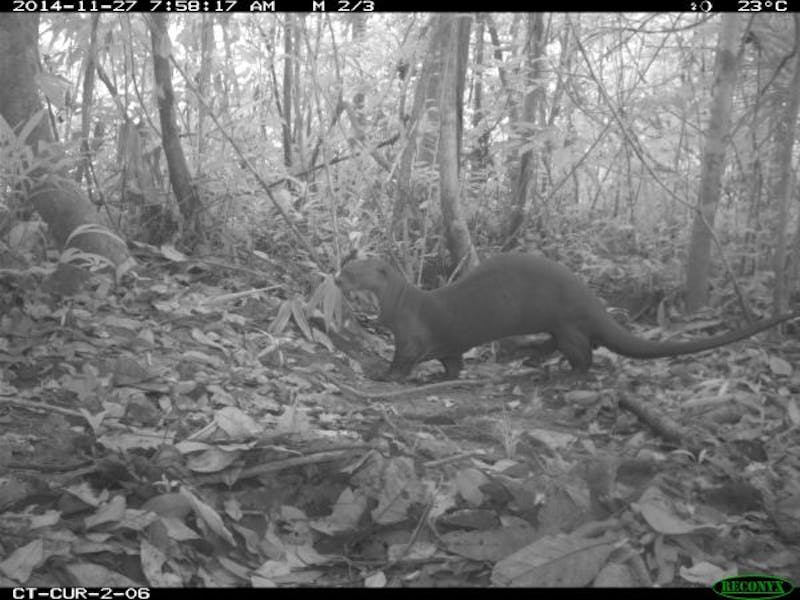 Giant otter filmed by camera trap in Curare, Colombia. This species is classified as Endangered by the IUCN Red List of Threatened Species. (Photo courtesy of CI Colombia/ASSETS)

“It has been really fun to socialize these modern field methods with members of these communities,” says Erwin. “They have learned how to use a GPS and install the camera traps, and they are great to work with in the field.”

The same methods will be used in another community downstream — Reserva Comeyafú, which has twice as many people — and a national park (Parque Nacional Natural Río Puré) that will serve as a “control” area. Detailed household surveys will complement the camera-trap information, allowing us to compare how the size of these communities and the number and diversity of wildlife species available affects their food security and nutritional health. 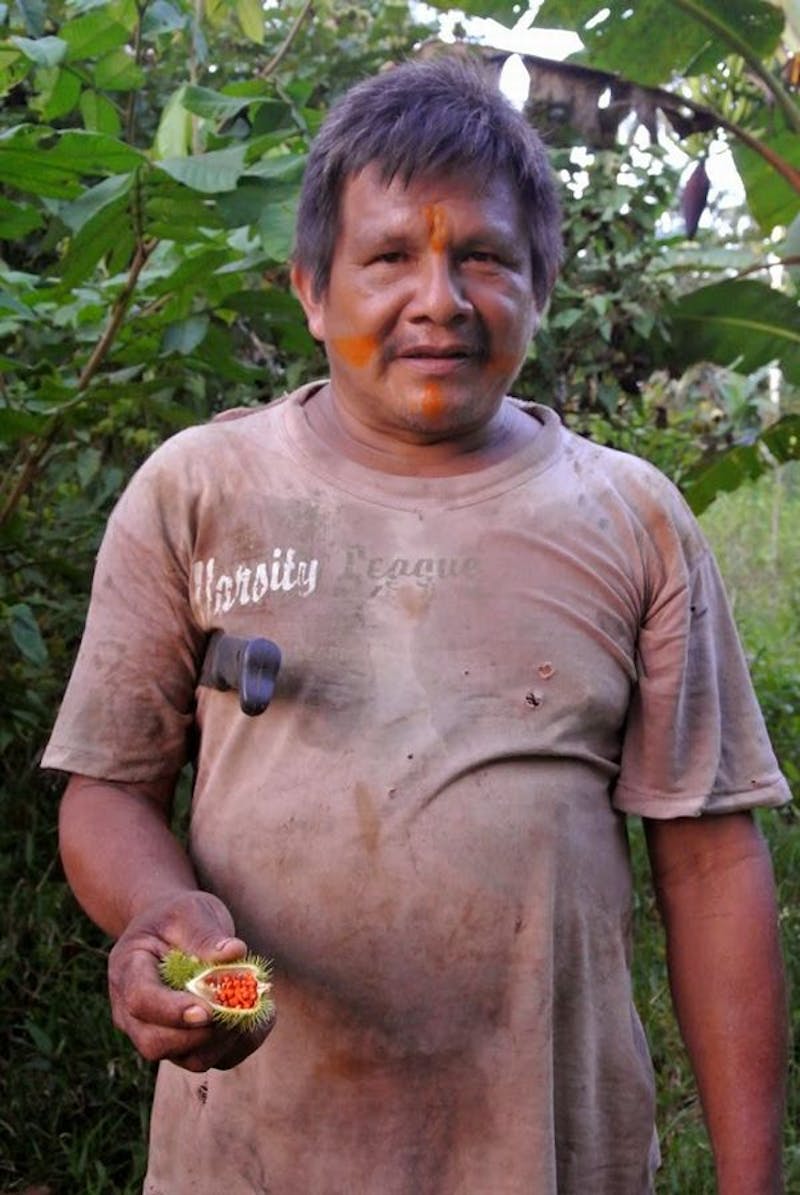 Alvaro Matapi Yucuna, a traditional owner of a maloca (community house) in Bocas del Mirití, an indigenous village in the Colombian Amazon. He holds a fruit that is used by local indigenous people for ceremonial body painting. Communities in this region are highly reliant on the forests where they live for their daily lives and culture; CI’s research in the region will help expand knowledge about the connections between ecosystem health and local food security. (© CI/Miroslav Honzák)

Taken together, this data will allow Erwin to quickly assess current stocks of wild animals and determine the sustainability of their use by people. Subsequently, this information will be used to inform the development of sustainable management plans for community lands.

This is a great example of how we can combine the power of technology, standardized data collection and measurement to demonstrate why people need nature. Just as an orchestra unites a range of instruments in harmony, we are bringing the strengths of different facets of CI together to ensure maximum impact. The “music” of the forest must continue on. 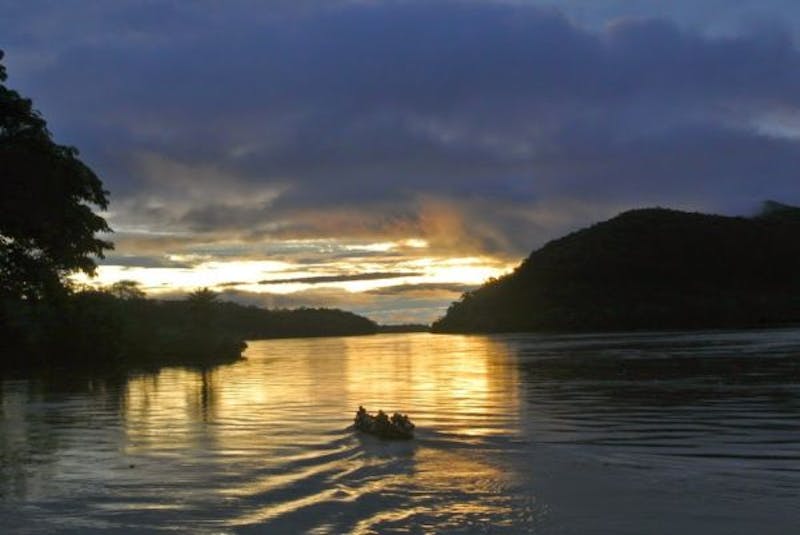 A boat on the lower Caquetá River in the Colombian Amazon leaving La Pedrera before the night sets in. The sacred Yupati Mountain on the right is shrouded in clouds. (© CI/Miroslav Honzák)

Jorge Ahumada is the executive director of the TEAM Network, a coalition of CI, the Smithsonian Institution and the Wildlife Conservation Society. Learn more about TEAM’s work in this week’s three-part blog series.

This project in Colombia is a unique collaboration between CI’s Betty and Gordon Moore Center for Science and Oceans, CI Colombia, the TEAM Network and other consortium members of the Attaining Sustainable Services from Ecosystems (ASSETS) project, which is funded with support from the Ecosystem Services for Poverty Alleviation Programme (ESPA). The views expressed here are those of the author and do not necessarily represent those of the ESPA funders, the ESPA Programme or the ESPA Directorate.