A recent surge in the trafficking of rhino horns and elephant tusks has attracted the attention of lawmakers in Washington, where bipartisan efforts have sprung up to protect iconic and other species — and stop the flow of money that the killing has unleashed.

A growing body of evidence is showing that the upswing in trafficking is financing an increasingly sophisticated — and dangerous — criminal enterprise around the trafficking of wildlife goods such as elephant ivory, rhino horn, shark fins and other species such as pangolins.

“It’s not just the killing of animals — it’s the trafficking,” said Jill Sigal, a Senior Vice President at Conservation International who leads the organization’s U.S. Government Policy division. “This money is going to fund terrorist groups and criminal networks: There’s a direct connection between wildlife trafficking and U.S. economic and national security, and it affects everybody.”

“There is a larger impact from the killing of these animals, and that should be of concern to all of us.”

How you can help

Call your representative in Congress — (202) 225-3121 — and urge him or her to support and co-sponsor H.R. 2494, a bill with broad bipartisan support that would help combat wildlife trafficking. Read more about the bill below, and donate to support conservation efforts like this one.

Sigal spoke with Human Nature recently about the link between crimes against nature and U.S. national security — and what the U.S. is doing about it.

Question: Can you give a quick snapshot of the situation?

But even if you are against poaching, you might still think — Why should I care? How does this impact me?

Some of the money from trafficked ivory is going to fund terrorist organizations and criminal networks — including the Lord’s Resistance Army and others. In this way, wildlife trafficking has a direct connection to U.S. and global security.

Traffickers are highly dangerous, sophisticated and organized. These are people who are using AK-47s, helicopters and night-vision goggles. They are killing not only the animals but also the people who are trying to protect them — 29 park rangers were killed in a 12-month period between 2014 and 2015, according to the International Ranger Federation. 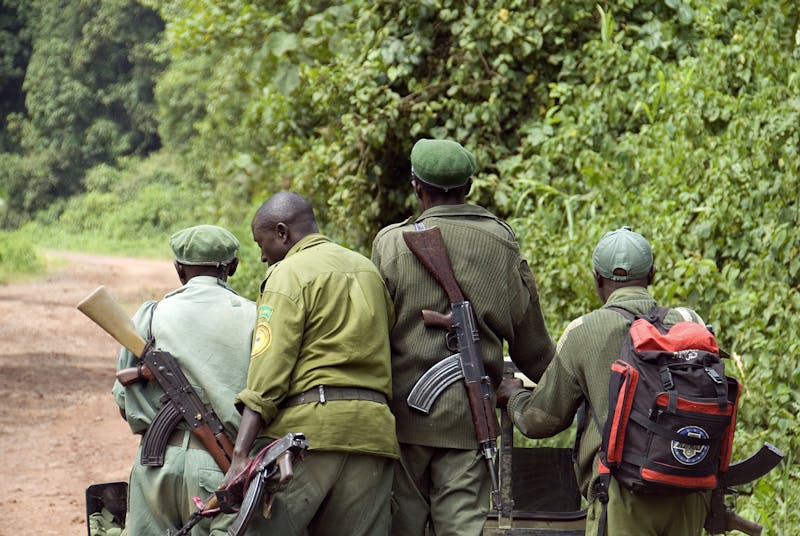 Rangers head out to patrol Kahuzi-Biega National Park in eastern Democratic Republic of the Congo. (© Conservation International/photo by John Martin)

Q: What kind of numbers — in terms of animals and of money — are we talking about here?

That is something that all of us should care about. We care about the animals being killed, and we also need to be aware of where that money is going and how it’s being used. It is a threat to economies in Africa that depend on tourism, it affects global security and it affects U.S. national security.

Q: What are lawmakers doing to address this problem?

A: Congresswoman Kay Granger — from Texas, Chair of the House Appropriations Subcommittee on State, Foreign Operations and Related Programs — is one of the strongest advocates in Congress on conservation. She is in a position to actually do something about it. She included US$ 45 million in last year’s appropriations bill to combat wildlife trafficking, $55 million for the current fiscal year and $55 million in the pending FY16 appropriations bill.

Congressman Ed Royce from California, Chairman of the House Foreign Affairs Committee, introduced a bill in May — H.R. 2494, the Global Anti-Poaching Act — that would help combat wildlife trafficking. That bill currently has 90 co-sponsors — 90 bipartisan co-sponsors.

The bill would help address the trafficking by strengthening wildlife enforcement networks and by authorizing the President to provide security assets, including intelligence and surveillance assets to African countries. The bill would also authorize the Secretary of State to withhold certain assistance from countries that fail to adhere to international agreements related to endangered or threatened species, and to make wildlife trafficking violations a predicate offense for money laundering and racketeering.

Chairman Royce introduced the bill in May, and it’s gaining steam. It was introduced with eight co-sponsors and now it has 90. It has been favorably reported out of committee, and the next step in the legislative process is a vote in the House. For legislation in Congress, this is moving at a good pace.

Q: What does this say about how Congress thinks of nature conservation?

A: Conservation is not a partisan issue. It’s one of those issues that appeals to people from across the political spectrum. More and more people — partly as a result of our efforts and other conservation organizations — are understanding the direct connection between resource scarcity and security. We appreciate many in Congress like Chairwoman Granger and Chairman Royce for recognizing this connection and taking action.

Q: What can people do if they want to help?

A: Each of us has a voice, and each of us can make a difference. For those of you that want to get involved, one action you can take is to call your representative in Congress — (202) 225-3121 — and urge him or her to support and co-sponsor H.R. 2494. Let your voice be heard and join us in the fight to combat wildlife trafficking.