Under pressure, an ‘alien’ world reveals secrets — and warning signs

Editor’s note: In honor of Shark Week 2017, we’re sharing one of our most popular shark blog posts. You can catch Dr. Greg Stone, executive vice president for Conservation International’s Center for Oceans, in the new Shark Week special, “Alien Sharks: Stranger Fins.” It will air Monday, July 24 at 10 p.m. EST. 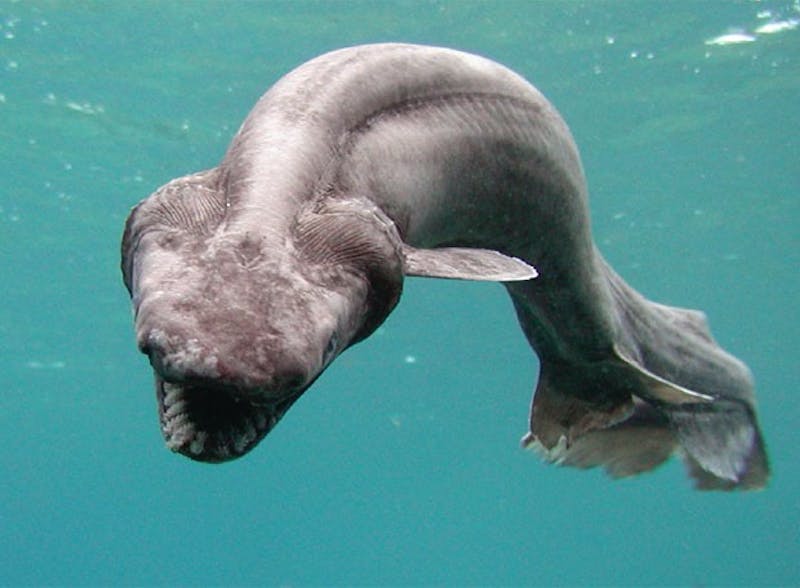 The deep-sea frilled shark is rarely seen by humans. Eel-like in shape, this species can measure 6 feet long and eat things that are more than half of its body length. (© Mario Sánchez Bueno)

Tonight the Discovery Channel will air its third installment of the show “Alien Sharks” as part of Shark Week. As in its previous two installments, this show will explore the amazing diversity of deep-sea sharks that, because of their natural habitat, are rarely seen by human eyes.

The deep sea is a place of great mystery and intrigue. Ancient mariners thought it was home to sea serpents and kraken, which emerged to drag ships to their doom. While we now know that some of these “monsters” suffered from mistaken identity — sea serpents were likely oarfish or eels, and the kraken was probably giant squid — we still know almost nothing about the deep sea.

Years ago, I had a rare glance into this realm — and an up-close look at an “alien” of the deep.

Halfway between Japan and South Korea, the Japanese research vessel Yokosuka pitched and rolled in the open ocean. I stood on the deck, feet spread wide to steady myself, as I prepared to become the first non-Japanese to dive in the manned submersible Shinkai 6500.

Japanese scientists and engineers in blue jumpsuits ran across the deck shouting orders to each other, the crane operator and me. I clambered down the narrow steel ladder to the loud screech and whine of hydraulics as the world’s deepest-diving research submarine prepared for launch.

I curled into the tiny passenger sphere of the 9-meter (30-foot) submarine. Less than 2 meters (6 feet) in diameter, this sphere held three men, electronic communication equipment, pressure valves, rice-ball sushi for lunch, cameras, bottles to urinate in, and everything else we would need for our 10-hour excursion to the seafloor.

With a final clank-thud and a turn of the locking wheel, the hatch sealed and all became suddenly silent. I looked out through the tiny porthole at the busy scene on deck; it ran like a movie without a soundtrack.

As the ship’s crane hoisted the submarine and lowered us gently into the waves, we bobbed like a cork on the surface for a few minutes while Ida, our pilot, completed the final checks. 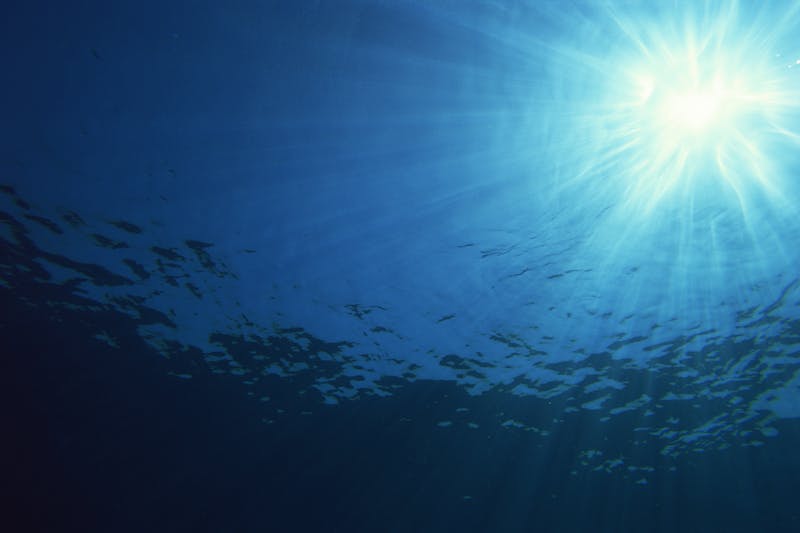 The ocean covers 71% of the Earth’s surface, yet there’s still so much we don’t know about it. The deep sea in particular remains largely unexplored; humans have visited only about 3% of it. (© Comstock Images)

With a thundering burble, we began our descent. It took us three hours to sink to the bottom, spinning gently in a slow-motion pirouette as gravity pulled us into the perpetually dark, near-freezing waters of the deep ocean. I peered out through the tiny, 8-inch thick Plexiglas porthole as blackness speckled with bioluminescent plankton, jellyfish and shrimp slipped by.

As Shinkai touched down softly on the seafloor, a cloud of fine sediment surrounded the submarine like a black fog before our halogen lights switched on. This environment had not seen the light of day since the oceans were formed 3.5 billion years ago.

I could see hundreds of feet in every direction as we sailed across the seafloor above massive fissures caused by an earthquake some 10 years before. The only sounds were our breathing and the hum of the electric motors that powered the sub’s thrusters.

Like deep space, the deep sea is cold and dark and — without the protection of the pressure sphere — it will kill you in a second.

As we descended, strange large-eyed fish with rows of organs shimmering like pearls swam up, blinded by lights they had never seen before. Long feathery red worms poked up through the mud and opened tentacles to feed on tiny floating organisms and other particles. On the edge of our light I saw the green eyes of a lurking deep-sea shark.

Although it was barely above freezing inside the sub, I was warm with the excitement of exploring this bizarre deep-sea world. I remembered a quote by 19th-century poet James Montgomery: “A world of wonders, where creation seems no more the works of Nature, but her dreams.”

A more accurate name for our planet would have been Ocean. Covering 71% of the Earth’s surface, the ocean is the world’s largest habitat. Within this salty blanket lives over 90% of all known life.

The deep sea in particular is the frontier of exploration that hides hundreds of thousands of undiscovered species — a treasure trove of potential biological discoveries that could provide insights not only for natural history but also for medicine and industry.

Compounds produced by marine organisms are increasingly at the center of research to develop new drugs. It was recently discovered that cone snails — small shellfish that have a stinging proboscis with toxic venom — may provide a substance that can be used to relieve severe pain in humans without the addictive properties of opiates. Other marine organisms are proven to have compounds that fight cancer and arthritis.

There are likely many other medicinal discoveries in the ocean waiting to be found. And it’s possible that the more challenging an organism’s habitat is, the higher the potential for a new potent compound, forged from the challenge of adapting there. 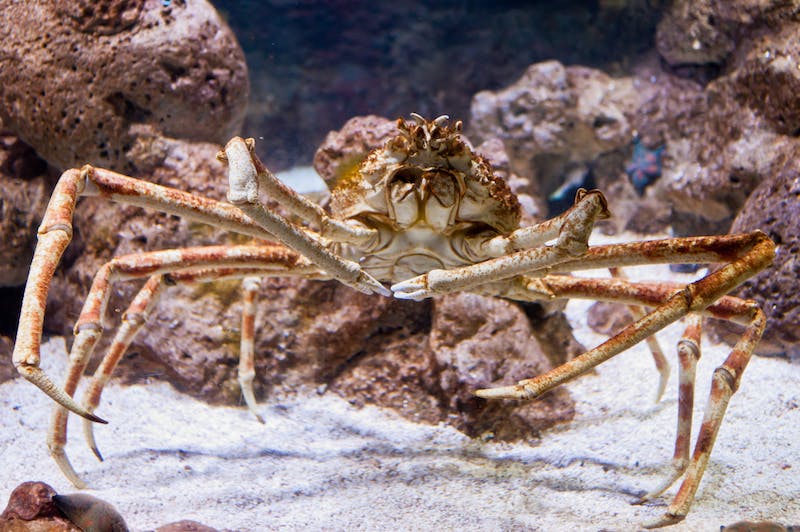 Japanese spider crabs like this one live on the ocean floor, where they eat things like shellfish, algae and dead animals. The crabs have a giant leg span that can reach nearly 4 meters (13 feet) across. (© Christopher Puchta)

The deep sea performs other important functions, too. Its currents stabilize the climate, absorbing carbon dioxide and helping the ocean produce over 50% of the oxygen in our atmosphere. These currents also provide nutrients that fertilize the oceans and form the basis of its complex food webs.

But despite its importance, the deep sea remains largely unexplored; humans have visited only about 3% of it. We know more about the dark side of the moon than we do about our own seafloor. However, scientists are studying and making new discoveries about the deep sea. Some of those new discoveries, however, are not always good news.

A 2014 study from the United Kingdom’s National Oceanography Centre found that life in the deep ocean could decline by nearly 40% because of a reduction of food sources that live near the ocean surface. Another study from the Smithsonian Institution predicted that changing water temperatures and shifting currents could cause a drastic reorganization of ocean life populations. It’s also believed that, because of the general stability in these ecosystems over thousands of years, even small changes in temperature or acidity level brought on by climate change could have devastating impacts for these ecosystems.

What this means for us

You might think that there is no way that changes in the deep sea will affect us — but it’s just not true. Life in our oceans has evolved into a perfect machine; species have come and gone, but the ecosystem structure they support has remained steady for the last 25 million years or so.

As an overzealous self-taught mechanic doing maintenance on a car engine can testify, if you start fiddling with parts without knowing what you’re doing, the odds are high that your engine will not work. When we start taking apart our oceans’ engine, we run the risk of having the entire thing break down on us when we need it the most.

Greg Stone is chief ocean scientist and executive vice president of CI’s Betty and Gordon Moore Center for Science and Oceans. Tune in to the Discovery Channel on Monday, July 6, at 10 p.m. ET/PT for “Alien Sharks: Close Encounters.”