Editor’s note: Where does our water come from? For nearly two out of three people on Earth, part of the answer is protected areas upstream from our homes. A paper published in the June edition of Aquatic Conservation: Marine and Freshwater Ecosystems presents a picture of the threats facing fresh water supplied by protected areas, and what that means for the billions of people who depend on it.

In this interview, Ian Harrison, the paper’s lead author, co-chair of the Freshwater Task Force of IUCN’s World Commission on Protected Areas and Conservation International’s senior manager of freshwater science and policy, explains why it’s crucial that we reduce threats to freshwater ecosystems by improving management of protected areas.

Question: What is the key takeaway from your research?

Answer: Protected areas are an important opportunity for protecting freshwater biodiversity and consequently supplying people with the water they need. But to achieve this, we still need to do a lot more to improve their management.

While a region might be protected, that does not guarantee the rivers flowing through it are safe. There are many reasons for this. The protection might be focused on the terrestrial habitats rather than the freshwater habitats; also, rivers are often at the boundary of protected areas rather than safely within them. Most importantly, the rivers in the protected area can be affected by threats like pollution or dams that occur upstream, outside the protected area, but that affect the water flowing into them. These can be serious threats — so much so, that 80 percent of the world’s population who receive water from upstream protected areas are in fact still receiving water that has been exposed to high levels of threat. Where there is a large population and a high level of development — Europe, North America, parts of Asia — these are areas where we need to do mitigation and better management of protected areas to improve the quality of water they provide to downstream populations. 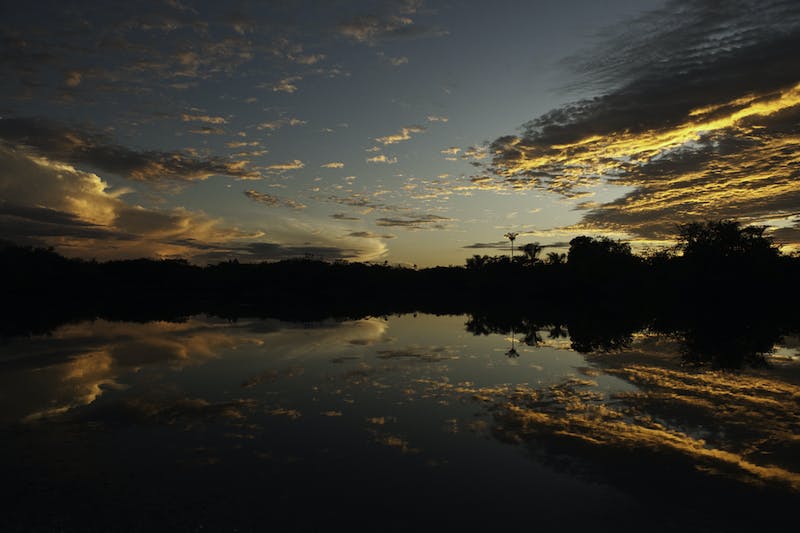 Permanent ponds in Guyana’s savanna grasslands serve as important sources of fresh water for locals. Worldwide, nearly two out of three people on Earth get at least part of their drinking water from protected areas upstream. (© Pete Oxford/iLCP)

Q: What are some real-world examples of protected areas providing water supplies for downstream populations?

A: Colombia’s Chingaza-Sumapaz-Guerrero corridor provides water for Bogotá’s nearly 8 million residents, but the area is vulnerable to climate change impacts on the mountain ecosystems that directly benefit the population. Conservation International has been working in the area for years, implementing climate adaptation actions to protect the city’s water source, guaranteeing water regulation and provision to the city. Within the corridor, Chingaza National Park is an example of what happens when a highly threatened protected area is effectively and sustainably managed: It secures freshwater provisions for the downstream population — in this case the residents of Bogotá — and it benefits the ecosystems within the protected area including fresh water.

Evidently, people recognize the importance of conserving their water supplies and are willing to pay for this. For example, a recent study led by Derek Vollmer, who also leads the development of CI’s Freshwater Health Index, has shown that residents of Jakarta, Indonesia would be willing to pay for park space and upstream forest conservation to support their water security.

Q: Based on this study, what should the world — both individuals and governments — be doing differently to protect essential freshwater sources?

A: This study measured the quantity of water that is being provided by protected areas to places downstream, and how threatened protected areas are in terms of their water provision.

In areas with moderate to low threat, there are things we can do to better manage protected areas for serve biodiversity conservation and human water security. We can implement “service area conservation” — maintaining and protecting water services from existing protected areas, as well as by broadening protected area coverage to neighboring regions. There are many areas that are critical for biodiversity conservation and, where the freshwater ecosystems are moderately intact, where these service area conservation practices could be very effective — for example, the headwaters of the Yangtze, Mekong and Salween rivers; parts of the Indo-Malaysian Peninsula and New Guinea; parts of western, central and eastern Africa; and parts of Central America.

Globally, increased attention to reduce the threats to fresh water in areas under protection, as well as designation and management of additional areas, are needed to safeguard freshwater flows, and support biodiversity conservation and the provision of freshwater ecosystem services. These actions are more likely to be taken if they are linked to national and international policies.

Ian Harrison is CI’s senior manager of freshwater science and policy. Sophie Bertazzo was a staff writer for CI.

Cover image: Children playing in a tributary of the Volta River near Nabogu, Ghana. (© Benjamin Drummond)