The trees that could make or break Mexico City’s future

Editor’s note: Last year, Conservation News blogged about the challenges of protecting the Bosque de Agua (Water Forest), a large swath of trees and grassland that supplies drinking water for more than 23 million people in and around Mexico City. This week, Conservation International’s (CI) Jürgen Hoth presented about the importance of grassland restoration at the meeting of the Convention on Biological Diversity (CBD COP 13) in Cancun; in this interview with Conservation News, he talks air pollution, the illegal drug trade and why planting trees isn’t always the answer.

Question: Mexico has been on something of a tree-planting frenzy lately. Why?

Answer: Last March, dangerous air pollution in Mexico City saw its worst spike in 11 years. This was largely due to thermal inversion: In the wintertime, warmer air near the Earth’s surface cannot disperse like in summertime because of the layer of colder, denser air on top, so the pollution remains concentrated.

Sadly, air pollution is nothing new for the country. The worst of Mexico’s pollution was in the early ’80s, when dead birds began falling from the sky. In 1985, we had a massive, deadly earthquake, and people realized that Mexico City was highly vulnerable. A lot of the polluting industry moved out of the city, which greatly improved air quality. So everyone was caught off guard last winter when they saw how severe the pollution was.

One problem is that Mexico City is still growing every day — and there are many more cars than there once were. The city has taken important steps forward with public transit, creating bicycle routes, etc., but most people still prefer to travel by car. During the worst smog, people stopped going to work and children stopped playing in the schoolyards, because the air quality was too dangerous. There was a huge public outcry, and the government’s response was “Let’s plant more trees.” The goal is now to plant 18 million trees. But here’s the thing: all trees are not created equal, as I have seen in my work in the Water Forest.

Q: How will this goal affect the Water Forest? More trees are good, right?

A: Not necessarily — it all depends on planting the right species in the right places, during the right season, using the right techniques. While the Water Forest of course includes trees, it is also made up of natural grasslands and other types of vegetation that are essential to help underground aquifers recharge. However, due to the lack of sound management policies, government-funded efforts have been focused on “afforesting,” rather than reforesting, this place. This means they are putting trees where they don’t belong — where they have never grown, and where they likely won’t ultimately survive.

For a while, people paid by the government and supported by some of the largest companies in the world were also digging ditches, supposedly to help the aquifers recharge. While their intentions were good, there is no sound evidence that this practice makes any difference. (Learn more in this video presentation, in Spanish.) Even worse, it actually releases greenhouse gases — around 8 tons of greenhouse gases per hectare. This is even happening within the national parks, degrading the heart of the unique habitat for endemic species such as the Sierra Madre sparrow and the volcano rabbit, as well as potentially contributing soil to floods in the nearby cities — all courtesy of a project with no conservation benefit.

There are also other threats to the Water Forest — and the people who depend on it. Farmers are increasingly converting natural grasslands into potato fields, using in an unsupervised and unprotected way a cocktail of toxic insecticides and herbicides to do so. Even the producers themselves recognize that not only does this pollute the aquifers that provide water for millions, but it presents an immediate human health threat. These guys are applying all of these agrochemicals without any protective equipment and transferring the costs to their families, the poorest of the poor in Mexico´s countryside.

Basically, it’s the perfect storm. Air pollution, water pollution, soil pollution, the wrong policies and alienation of the indigenous communities who own the land, with little support for their direct involvement in conservation. It’s the result of an administration that can’t see past their six-year term. That’s why we need a long-term strategy for the Water Forest, which can serve as a blueprint toward 2030. (Get a glimpse at the Water Forest in the video below, which premiered at a COP 13 event in Mexico hosted by Toyota and IUCN.)

Q: Where does protecting the Water Forest rank among the other serious issues that Mexico is dealing with, such as gang violence and drug trafficking?

A: Taking drugs is a matter of pleasure. Water is a matter of survival. But there is a common denominator: People involved in the drug trade and people that live in the Water Forest — often one and the same — are both looking for jobs. Many illegal activities — logging, drugs, soil extraction, etc. — frequently become connected through the same criminal networks.

Another problem is that because the indigenous communities that own much of the Water Forest have few sources of income, they are more willing to sell their lands as a measure of survival — land that then frequently turns into settlements. We must cut these perverse cycles that boost urbanization and instead restore community pride by creating jobs that relate to natural resources and cultural traditions. The question is, how?

Probably there are few places in the world where urban, rural and nature conservation interests collide with each other in such stark ways. This forest and encroaching city is a frontline for nature — and through threats to their water source, the survival of more than 23 million people is at stake.

Q: What is being done to protect the Water Forest, and how is CI involved?

A: One of the first things that we must address is the lack of scientific foundation behind many government policies for the Water Forest. Right now, it’s up to the politicians to decide what to do about the Water Forest, but they often don’t have all the information they need to make the best decisions.

CI, the National Autonomous University of Mexico and the German Development Agency recently held our first forum with CONANP, Mexico’s commission of protected areas, to assess the measures that have taken place within their protected areas and see how we can correct them. It is not easy for the government to recognize wrongdoing, and of course, we have to be very careful in how we phrase our criticism. But rather than just pointing fingers, we want to help them transition to more sustainable policies, and we are slowly making progress. For example, after 30 years of promoting the ditches that were destroying the soil, the government largely halted their use after we showed their ineffectiveness.

We also need to improve governmental collaboration by ensuring that there is a formal engagement among the states and federal government toward the Water Forest. About 70% of the forest is protected by 21 protected areas — federal, state and communal — but in reality much of this area is mismanaged. Clearly, whatever happens in these protected areas can determine the overall future of the Water Forest and the megacity that relies on it.

The good news is that we have built a trusting relationship with all levels of government; CI’s Water Forest strategy has been endorsed by top government officials working on forests, water, law enforcement and protected areas. This level of support — which has survived two political administrations — is pretty unheard of, yet it is not yet formalized. Now we must channel all this trust into a more official, enduring, focused agreement that is backed by science and can be constantly evaluated and adjusted based on its progress. 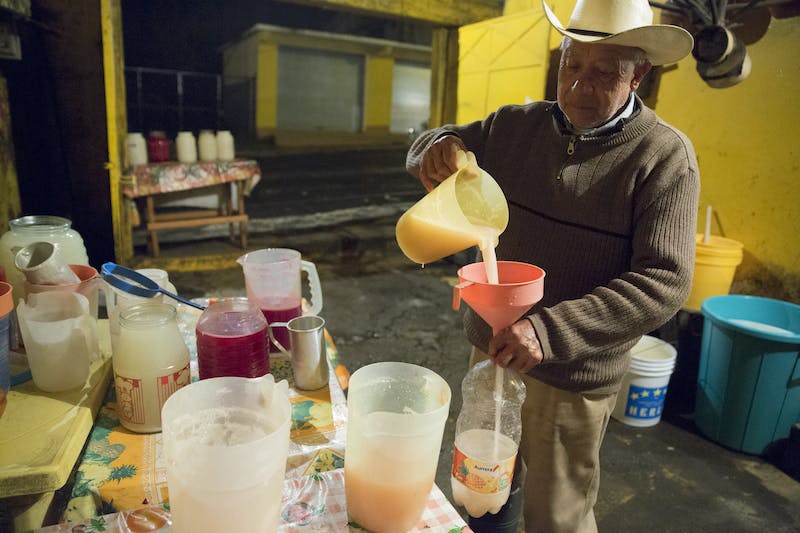 A gentleman uses fruit and honey from the Water Forest to create a local alcoholic specialty drink. As longtime residents of the forests and grasslands that surround the sprawling Mexico City, local people must be valued partners in conservation efforts. (© Jessica Scranton)

Q: Where do local communities come in?

A: We must improve engagement with local people. Among the 100 communities in the region, there are basically no tree nurseries using local species. All the trees currently come from highly mechanized, government-owned tree nurseries at lower elevations. When the trees are planted at a different altitude, they frequently don’t survive. We must promote local nurseries that generate local employment. Ultimately, we want to generate a dynamic in which neither NGOs nor the government are strictly necessary — where communities can have and generate enough knowledge and skills to be the stewards of the land and enjoy sustainable livelihoods. That means growing their own locally adapted trees from a local seed bank, and basing decisions about where, when, what kind and how many trees and grasses to plant on a combination of traditional knowledge and the latest science.

For too long there has not been a forum where community members could be heard. Now, for the first time, we are bringing indigenous community leaders face to face with federal government officials, state government officials, university professors and NGO staff to work together and design joint workplans, aiming to prevent wrongful land management before it starts. This forum is a promising step to encourage marginalized groups to come together to discuss what is best for their own communities, for nature and for the cities.

Top photo: Lagunas de Zempoala National Park. The park is part of the Water Forest, an interconnected expanse of trees and natural grasslands that supply drinking water for more than 23 million people in and around Mexico City. (© Jessica Scranton)