The One Planet summit is over. Here’s what you need to know 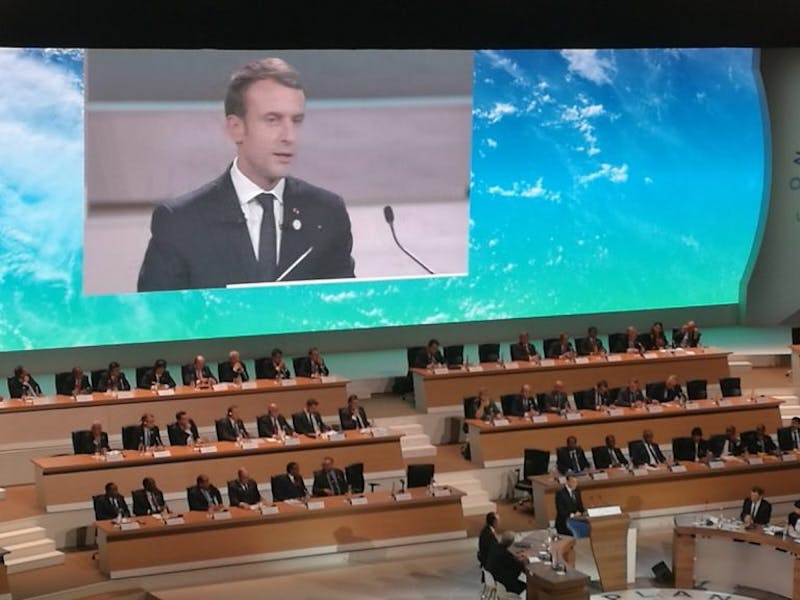 The One Planet summit in Paris ended Tuesday with a spate of new commitments to combat climate change, despite — or perhaps because of — one notable absence.

The summit, which sought to focus on meeting the goals of the 2015 Paris climate agreement, drew dozens of world leaders — but not U.S. President Donald Trump. In June, Trump announced that the United States would pull out of the Paris pact, and the world’s largest emitter per capita is the only country not supporting it.

If anything, Trump’s move only galvanized more support behind the climate agreement.

“I think the [U.S.’s] withdrawal — to be totally fair with you — created a huge momentum to me to create a counter-momentum,” French President and summit host Emmanuel Macron said in an interview with CBS News on Monday.

At the summit, Macron awarded 18 climate scientists, mostly from the United States, multimillion-dollar grants to relocate to France for the rest of Trump’s term.

At the summit, more than 200 global investors pledged to engage with 100 companies estimated to be responsible for around 85 percent of total global greenhouse gas emissions. These investors will work with these companies to develop a framework that outlines the companies’ accountability on climate change, reduce greenhouse gases throughout their chain of business, and provide disclosure mechanisms that will make their progress public.

“The financial commitments made at the One Planet Summit were an encouraging step in the fight against climate change,” said Jennifer Morris, president of Conservation International who attended the summit in Paris. “In addition to the commitments made on Tuesday toward advancing renewable energy, we can’t forget a critical piece of the equation: Investing in nature.”

While nature can provide at least 30 percent of the solution to help countries meet their Paris Agreement targets. Thirty percent of necessary emissions reductions can come from the protection and representation of forests. Forests and natural ecosystems absorb carbon emissions and shield the Earth from the effects climate change.

One of the major themes of the One Planet Summit was how to invest in projects that will provide the most impact for mitigating climate change. Participants agreed that the global financial system isn’t shifting fast enough away from carbon emissions toward projects that alleviate climate change, according to USA Today.

Nature only receives two percent of climate funding. Instead funding goes to renewable energy solutions and recycling, which are notable, but this money could go further by protecting forests and natural ecosystems.

Over the past year, CI has worked on climate finance initiatives including the Green Climate Fund (GCF) dedication of US$ 500 million to help conserve forests and mangroves, a project that compensated Kenyan communities for keeping the forests standing, and a commitment from six indigenous communities in Bolivia’s La Paz region to protect nearly 55,000 hectares (136,000 acres) of forest through conservation agreements.

“We won’t be able to meet the goals of the Paris Agreement without nature,” Morris said. “We need to invest more aggressively in global conservation and restoration efforts. We have a long way to go to secure adequate financing to protect nature.”

Morgan Lynch was a staff writer at CI.