The future of Africa, in 6 charts

The last large source of arable land, minerals and fossil fuels, Africa may also be the continent that is the least-equipped to manage and protect its resources sustainably. If pursued with nature’s value in mind, Africa’s growth could mean long-term prosperity for its people; if not, it could bring unsustainable consumption, resource extraction and environmental degradation.

Here are some of the changes facing the continent.

1. There are more Africans than ever before. 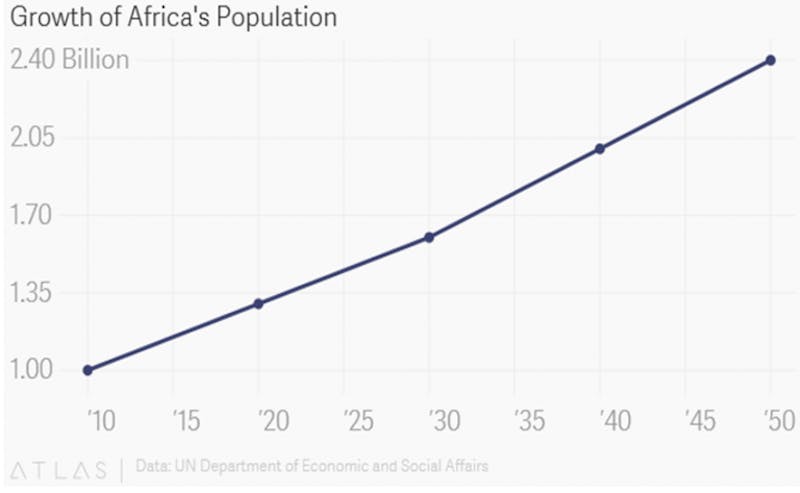 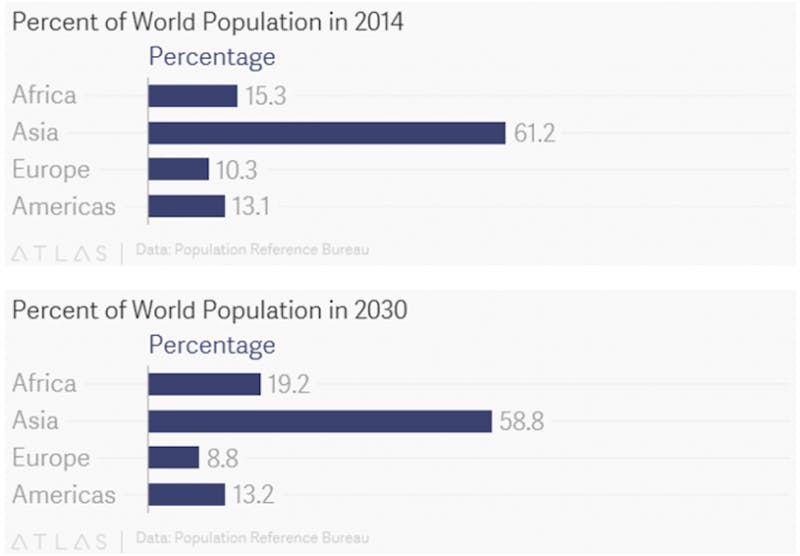 Africa’s population is projected to more than double by 2060, with 300 million new babies born just between 2015 and 2030. More mouths to feed will put increasing pressure on the continent’s agricultural production, which is already failing to provide enough food for Africa’s current population amid challenges like drought, insufficient financing and lack of infrastructure connecting sellers and buyers. More than half of the African population — and an even higher percentage in East Africa — is dependent on agriculture for at least part of their livelihoods, which means that changes to agricultural productivity would have widespread impacts. Of the world’s 20 countries most vulnerable to agricultural production loss due to climate change, 11 are in Africa.

3. Africa’s workforce is growing faster than any other continent. 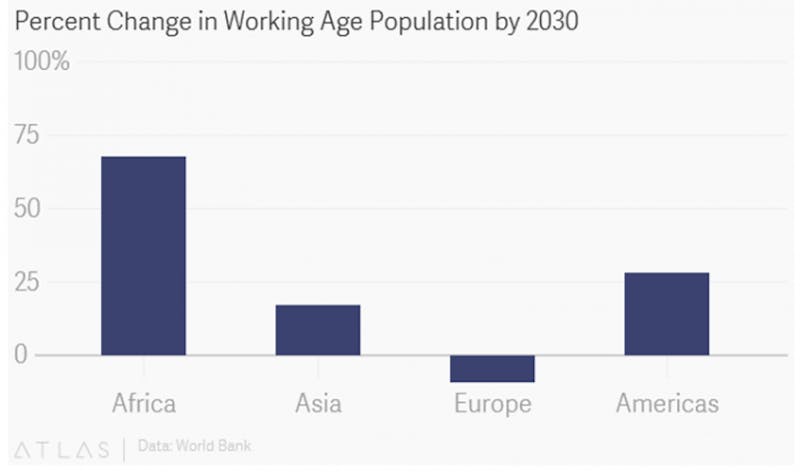 While this shift reveals the potential of Africa to take a larger role in the global economy, having people ready to work isn’t enough. Michael O-Brien-Onyeka, senior vice president of CI’s Africa field division, explains: “By 2050, one in every four workers in the world will be from Africa — but I’m not sure if all of them will have jobs.”

In order for those jobs to be sustainable long term, they must reflect a new economy that accounts for nature’s value. If Africa’s economic growth continues at the cost of its “natural capital” — that is, the forests, fresh water, soil, wildlife and other elements of nature that its people rely on — the continent’s future as a global leader will be in jeopardy.

4. Almost half of Africans live in cities. 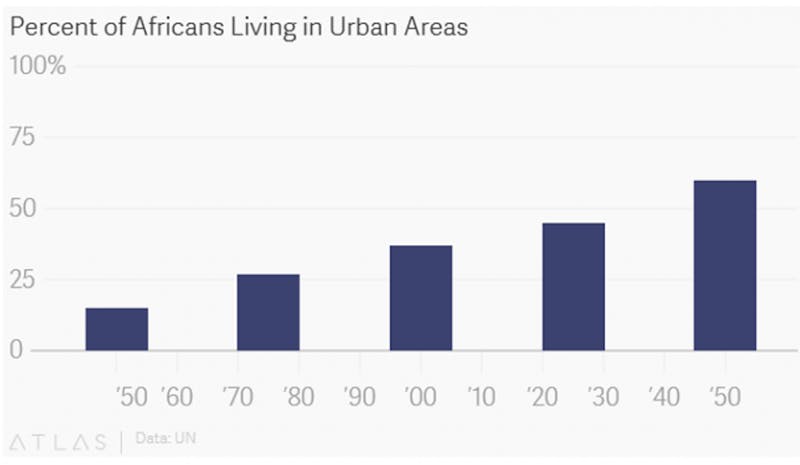 To much of the world, Africa is synonymous with wildlife — but many Africans have never seen a wild giraffe or elephant. As the growing population of mainly young people migrates to cities in search of work, economists are asking the question: Will urbanization in Africa solve any of its economic problems?

Cities offer “investment, innovation, skilled labor, and higher incomes”; for many countries, they’re the hallmark of development. But cities can also bring “congestion, the creation of slums, worsening air quality, floods and inadequate sanitation, and joblessness arising from migration from poor rural communities to urban centers ill-equipped to receive them.” Which direction will dominate Africa’s cities? It will depend on the development path its countries choose. 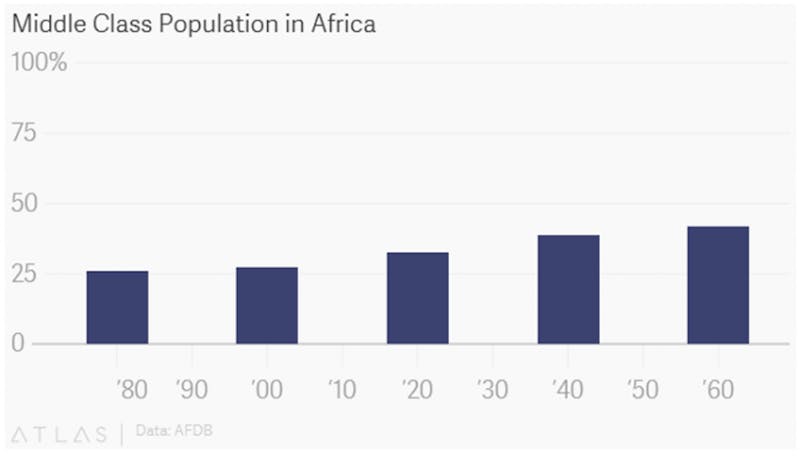 A rising middle class is good news for the economy — and the newly affluent members of that group. But too often it goes hand in hand with overconsumption and a host of environmental issues that affect human health, the long-term availability of natural resources and ultimately, economic stability. In places like China, which is projected to overtake the United States as the world’s largest economic power, the short-term economic gains of a rapidly rising middle class — and its spending habits — have come with serious environmental ramifications like deforestation and increased carbon emissions from more cars on the road.

6. Half of the world’s 12 fastest-growing economies are in Africa. 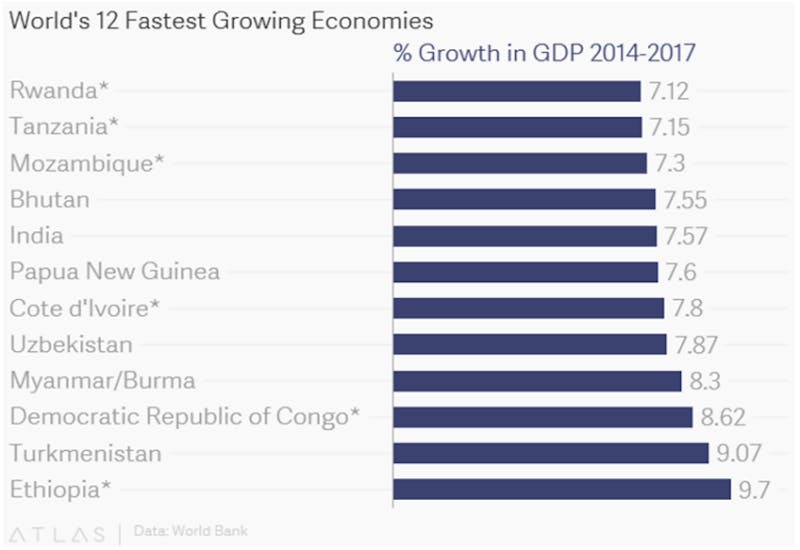 What can be done?

For Africa to manage its resources for future generations, it will have to account for the value of its “natural capital,” as it does its financial and human capital. The Gaborone Declaration for Sustainability in Africa, a 10-country consortium spearheaded by Botswana, offers a model for bringing the value of natural resources into economic decision-making.