The countdown is on to protect nature, save economy of tiny forested country 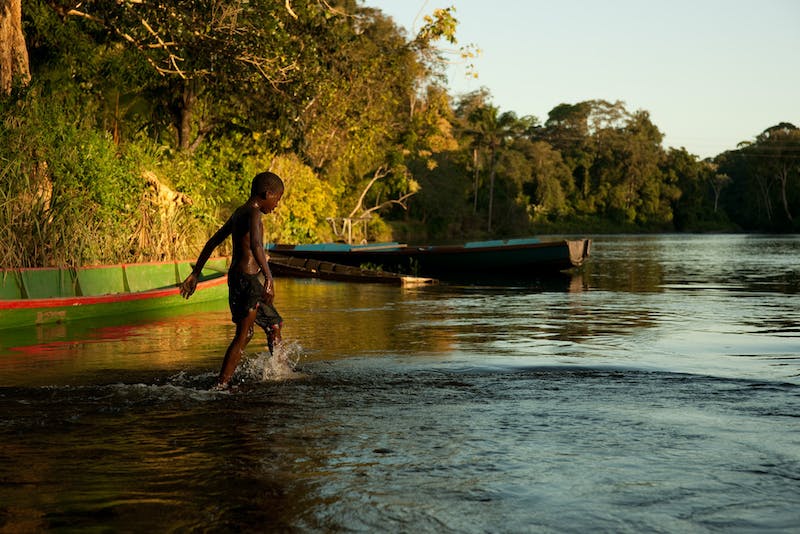 A boy wades through a river in Suriname. As the under-funded government has reduced services such as electricity and healthcare to the country’s rural interior, residents have been forced to pursue destructive activities like gold mining in order to make a living. Alternative livelihoods can provide a more sustainable solution. (© Cristina Mittermeier)

On the wall in Conservation International’s (CI) office in Paramaribo, Suriname, we recently installed a 1,000-day countdown clock. The clock ticks down toward the year 2020 — a big benchmark for many global environmental agreements that will impact the future of millions of people worldwide. Every day, this clock reminds our entire team that when it comes to protecting Suriname’s valuable forests and rivers and building a sustainable economy in what is called the “greenest country on Earth,” time is running out.

2020 is a milestone year for the Paris Agreement, when implementation of countries’ climate change action plans is set to ramp up. The Aichi Targets — a set of 20 biodiversity-related goals set in 2010 — also have a targeted 2020 due date. And one of the Sustainable Development Goals states that countries should manage their forests sustainably by 2020. If Suriname intends to meet the promised contributions to all these efforts, we have to make these 1,000 days count.

2020 is also the year of the new elections in Suriname. Experience has taught us to expect that after December 2019, not much will get done until the new government emerges late the following year, at which point the whole process will start over with new ministers and new agendas, regardless of which party wins.

Although my small South American country contains some of Amazonia’s most intact remaining forests, it is facing unprecedented threats, many of which are tied to an ever-weakening government.

The government’s nature conservation departments have been underfunded for a long time, but last year the government income fell drastically because of a commodity economic crash, reducing available funding even more. And one of the first things our government does when it runs out of money is it stops providing services to the country’s poor rural interior, where the indigenous people are living. The government has already reduced the provision of electricity, schools and healthcare there. So if you’re living in one of those villages, you’re going to have to look after yourself. You will start poaching wildlife, mining gold and selling timber, because that’s what you have and you have to eat today. Suriname has seen deforestation skyrocket over the last 10 years thanks to soaring gold prices.

Suriname’s protected area network contains 2.1 million hectares (5.2 million acres) — and much more if you count the recently declared Southern Suriname Conservation Corridor (SSCC). Unfortunately, most of the Surinamese conservation areas could still be described as “paper parks” because there are no management plans in place and there is hardly any specific funding from the government. The Nature Conservation Division of Suriname has something like two cars and one boat to monitor the country’s protected areas — no helicopters, no planes. So right now these parks are just sitting there being degraded.

How can we fix this broken system? CI Suriname wants to prove to the country as a whole — not just the government, but also private sector and civil society — that green growth, a concept centered around respecting and using nature sustainably, is a viable and indeed smarter development paradigm for Suriname. We’ve got a number of key ministries that understand this, but there’s a lot more work to do.

First, we’re working with the government to help update Suriname’s Nature Conservation Act to be more inclusive. Right now, the government is the only entity allowed to run a protected area; we hope to enable co-management that will allow both the private sector and indigenous communities to have a real participatory role in nature conservation. This will pave the path for the SSCC to be recognized as a legitimate protected area managed either fully by local indigenous groups or co-managed with government.

It’s a big reform process requiring input from many stakeholders and experts, and will probably take two years. As part of this work, we’ll be training the parliament members who will be involved in this legislation, doing workshops and sending them to places such as Costa Rica and Brazil so they can see what strong protected areas looks like and how they can benefit society. We’ll also be running a local outreach campaign to clarify why the average Surinamese citizen should care about nature and the legislation controlling it.

In the case of the vulnerable communities living in the country’s interior, we must create better alternative livelihoods that will provide income today without making things more difficult for them in the future. If we work with these communities, they will be the best guardians for nature we could wish for.

We’re not telling Suriname’s government not to mine gold or drill for oil or cut timber — no one wants to listen to that advice. Instead, we’re presenting better options that can bring in much-needed income for years to come, including nature-based tourism, REDD+, non-timber forest products or even providing fresh water for drought-stricken Caribbean countries.

For example, we’ve started building the first Brazil nut oil agro-processing unit in Alalapadu, a village within the SSCC. We’ve identified 8,000 wild Brazil nut trees in the area; once the oil is produced, it will be purchased by a local cosmetics producer. Because this business relies on wild trees, it involves zero forest clearing. If we can find a way to replicate projects like this that sustainably harvest the incredible richness of the forest, we won’t have to build new factories, because the factory is the forest itself. 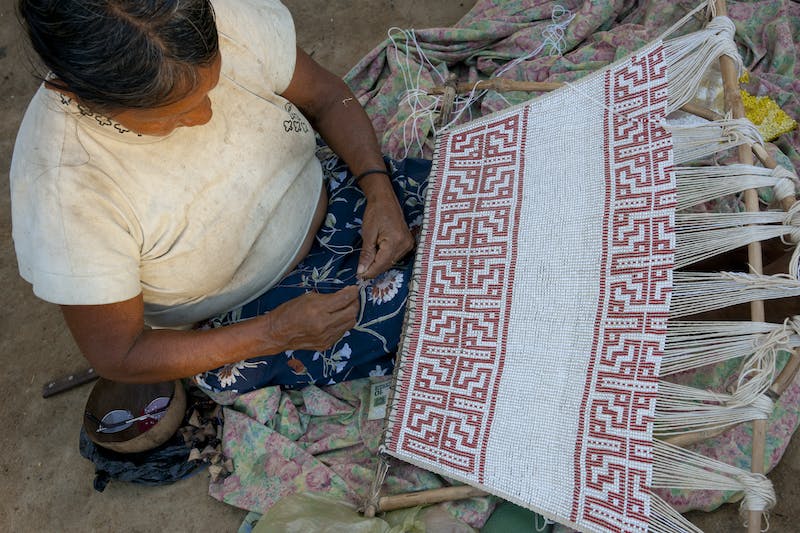 Woman weaving in Suriname. If there is enough of a market for them, selling handmade handicrafts can be an alternative livelihood for rural communities that doesn’t depend on cutting down vital forests. (© Cristina Mittermeier)

Ultimately, so much depends on how we talk about nature with those who make the big decisions. If you talk with a minister, for example, and all you say is “Let’s protect this wonderful area, it will cost you US$ 500,000 in rangers and equipment,” he or she won’t even make time for you on his or her agenda. Therefore, when speaking to policymakers we make sure to talk about ways to create jobs, and about how we can develop and diversify the economy.

Like many developing countries, Suriname is on the lowest rung of Maslow’s Pyramid right now. The people here are concerned with just living until tomorrow. So if you want to be heard, you’re going to have to plug in to the need for economic development. Otherwise people will say, “You’re more interested in trees and animals than in our well-being.”

You have to talk about protecting nature in the context of sustainable development in order to have a real conversation. And only if you are having a conversation, we can positively influence what’s happening.

I think some people in our line of work get so caught up in their own reality, where we are so convinced that we are doing the right thing, we forget that we frequently deal with people who have different concerns and goals. Sometimes that’s because they are unaware of certain things; other times they know but other things are deemed more worthy of time and resources. For politicians to put their political capital on the line to protect nature, they need to see how it serves their interests and those of their constituents. The best thing we can offer is to show them how they’re creating sustainable jobs and opportunities for their constituents.

If we can expand support for green growth in Suriname now, CI is more likely to have a seat at the table when a new government comes in in 2020. I don’t believe it’s a zero-sum game. I think there can be winners and more winners — but only if the movement toward sustainable development accelerates now.

John Goedschalk is the executive director of CI Suriname.