Stopping deforestation in the Amazon by 2020? It’s possible

Editor’s note: Unless otherwise indicated, all statistics mentioned in this blog come from Conservation International’s calculations.

Since the 1970s, “save the Amazon rainforest” has been a rallying cry for environmentalists and human rights activists worldwide.

Yet despite significant progress on slowing destruction in some areas of this forest, it continues to disappear at a rate of 1.5 million hectares (3.7 million acres — an area the size of Connecticut) each year. Amazonia — a region that includes the Amazon watershed and rainforest as well as adjacent forests in Guyana and Suriname — is still the largest tract of tropical rainforest on our planet, but 9 percent of the forest is already gone.

In recent years, countries and corporations are ramping up their commitments to cut down fewer trees and plant more of them. In 2014, the New York Declaration on Forests united 30 governments and 50 companies under the goal of cutting natural forest loss in half by 2020 and ending it by 2030.

But others have a shorter timeline in mind, seeking to reach “zero net deforestation” — meaning that whatever deforestation that is unavoidable is offset by planting new trees that can absorb an equal amount of carbon — in the next four years.

“No deforestation at all just isn’t possible,” said Lisa Famolare, vice president of Conservation International’s (CI) Amazonia program. “For example, highly forested countries like Suriname and Guyana will likely have some deforestation as they develop. As we support these countries’ efforts to develop sustainably and avoid deforestation, we can gain forest in other places like Brazil, which has plans to reforest 5 million hectares [12.3 million acres].”

Colombia has pledged to achieve zero net deforestation in its Amazon region by 2020; Peru aims to reach this goal for the entire country by 2021. Many companies, too, have made this pledge. In 2010, the Consumer Goods Forum, a group with more than 400 member companies and a combined economy the size of France, committed to help the world achieve zero net deforestation by 2020, focusing on soy, palm oil, beef, pulp and paper.

These are ambitious goals, and they raise important questions: In the resource-strapped, consumption-driven world we live in, is zero net deforestation in Amazonia — or anywhere — even possible? And if so, how?

Fearing for the forest

Although the Amazon watershed and rainforest is most often associated with Brazil, the region of Amazonia spans parts of nine countries in South America.

Some 30 million people live in Amazonia and rely on the benefits that the forest provides. But those benefits extend far beyond its canopies: “This region is basically a climate mitigation machine that’s active 24/7 pulling carbon dioxide out of the atmosphere,” explained Sebastian Troëng, the senior vice president of CI’s Americas field division. “The only thing we need to do to ensure that this machine continues to operate is to avoid deforestation. If we don’t, it will be felt by everyone on the planet. So the more vulnerable you are to the impacts of climate change, the greater the importance of Amazonia for you.”

Over the past three decades, surging global demand for commodities like beef, sugar, soy, palm oil and coffee have led to spikes in deforestation across Amazonia, as virgin forest was converted to farmland.

“Brazil has more than doubled the size of its farmlands over the last 35 years,” said Rodrigo Medeiros, vice president of CI Brazil. “We’re now approaching more than 75 million hectares (185 million acres) of agricultural land. But for many people both within and outside Brazil, the main question we’ve been asking ourselves is at what cost have we achieved this result?”

Indeed, activities such as agricultural expansion, mining and the construction of new roads have already decimated an area of Amazonia twice the size of Texas. Around 90 percent of deforestation in the region takes place within 100 kilometers (62 miles) of a road.

The devastation is pushing the region toward a tipping point:  Scientists have estimated that once 30 percent of the region’s original forest cover is gone (PDF), it will trigger irreversible changes in the local climate that will jeopardize crop yields, threaten freshwater supplies and disrupt social stability.

How to reach zero net deforestation

“Up until this point, most people have viewed fighting deforestation in Amazonia through the lens of individual solutions rather than looking at the bigger picture,” said Troëng. “We need to take a more unified approach, connect what we’re doing in each country and ask ‘What combination of tools and approaches is required to conserve Amazonia, both in the places that are still wilderness and in the places that are driving deforestation?’”

To make zero net deforestation by 2020 a reality in Amazonia, CI scientists have identified three zones within the region that require different actions: 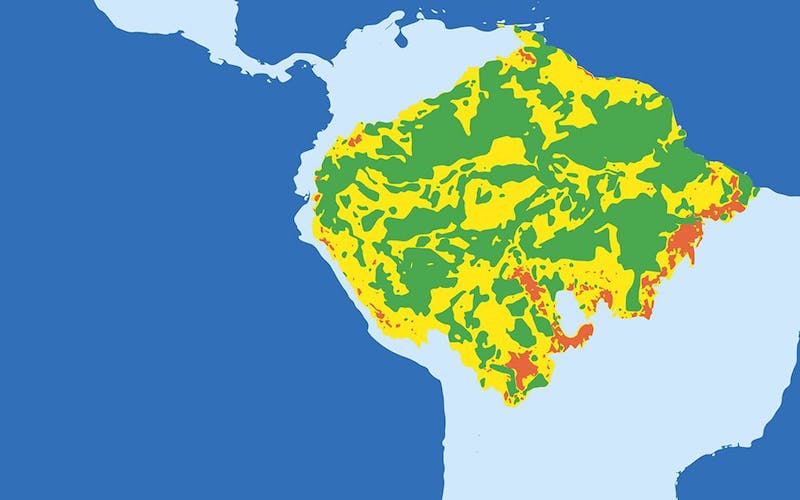 “Reaching zero net deforestation by 2020 will require pursuing different actions simultaneously in all three zones to ensure that all land is being managed as effectively as possible,” said Famolare.

1. Strengthen and expand the Green Zone.

Although these areas are under some degree of formal protection, the level of enforcement varies based on factors like park resources and availability of jobs for local people that don’t require cutting down the forest. In fact, 1 percent of protected areas in Amazonia have already been deforested.

In order to improve management of these areas, government officials and local community members must be trained in enforcement measures, such as the use of monitoring drones. Communities must have access to income-generating activities that depend on standing forest, such as ecotourism and trust funds. And perhaps most important, different groups that use the forest — such as mining companies and indigenous communities — must talk to each other to minimize conflict.

2. Avoid deforestation in the Yellow Zone.

“This zone is the area of Amazonia most at risk of destruction because the forest is relatively intact and unprotected,” Troëng said.

Drawing on smaller-scale successes in the region, CI will help governments expand protected areas and establish new ones; grow programs that compensate land users for keeping forests standing through global initiatives such as REDD+ (Reducing Emissions from Deforestation and forest Degradation) and national programs including Ecuador’s Socio Bosque and Brazil’s Bolsa Verde initiatives; and encourage natural capital accounting, or the incorporation of the value of nature’s benefits into economic systems.

Although forest in these areas has already been cut down to make way for farms and other human activities, their management plays a huge role in the fate of remaining forests, for better or worse. “I think the Red Zone will probably present the greatest challenge of the three, as essentially we’re trying to ensure that Amazonia doesn’t get more ‘red’ despite tremendous pressures to expand food production for economic and employment reasons,” Troëng acknowledged. “However, developing models show that it’s possible to achieve such production by more effectively using the lands that have already been degraded.”

Building on the success of Brazil’s soy moratorium by promoting sustainable agriculture — especially palm oil and soy production — in already degraded areas can lessen deforestation pressure on critical standing forests, as will limiting mining impacts by avoiding critical natural areas and minimizing and offsetting impacts that cannot be avoided. In addition, expanding “zero deforestation” commitments within the private sector will help bring the zero net deforestation dream closer to reality.

It’s an ambitious goal, and even if it is achieved, it comes with caveats. Curbing deforestation in Amazonia will be for naught, experts say, if it causes deforestation to accelerate in Africa or Southeast Asia (a scenario known as “leakage”).

However, Troëng believes the goal is more achievable now than it’s been in the past few years, thanks in part to the momentum set forth by last year’s historic climate change agreement.

“Since the Paris Agreement, there’s a coming together of international political will, global targets and private sector commitments that is creating the kind of enabling conditions that are required to meet these very ambitious goals.”

Will 2020 be the year humanity can finally say, “We saved the rainforest”? Better late than never.