Sticker shock: This country’s taste for ‘bushmeat’ comes at a terrible price 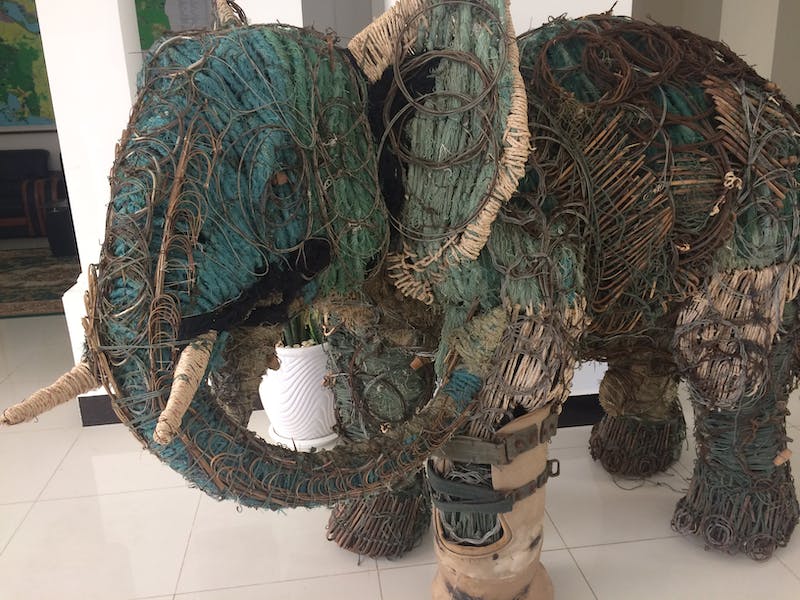 Cambodia is a major source of illegal wildlife products, such as leopard skins and pangolin scales, to other countries.

But one of the greatest threats to the Southeast Asian country’s wildlife is home-grown: Cambodians’ taste for wild animal meat, also known as “bushmeat.”

Now, an in-your-face campaign aims to shock Cambodians into changing their diets — before it’s too late.

Bushmeat hunting alone has pushed more than 113 species in Southeast Asia closer to extinction. To raise awareness about poaching and its effect on wildlife, ecosystems and economies, a new approach targeted Cambodian consumers directly — at the country’s only shopping mall, in the capital, Phnom Penh.

Displays of maimed wildlife and celebrities covered in fake blood had the desired effect, stopping shoppers in their tracks.

Named “The Capture Project,” the exhibition of graphic photographs and sculpture in Phnom Penh aims to raise awareness of how eating bushmeat fuels the illegal wildlife trade and harms Cambodia’s wildlife.

Every year, millions of snares — traps made of metal wire loops — are placed illegally in Cambodia’s forests to kill animals, which are then sold in Cambodia’s urban centers and to international markets in Vietnam and China. Many Cambodians are unaware that ordering wild-caught meat at a local restaurant fuels organized crime and reduces biodiversity. Animals such as muntjac, sambar deer and wild pig are menu favorites, with high-paying customers believing that these forest-caught meats are tastier and “fresher” than farmed beef.

“The illegal wildlife trade is the biggest threat to biodiversity in Asia,” said Thomas Gray of Wildlife Alliance, a partner organization that organized the exhibition with financial support from Conservation International. “Snares are creating genuinely empty forests where rats are often the largest animals left.”

Already, rhinoceros and tigers are extinct in Cambodia in large part due to poaching. According to Conservation International (CI) Cambodia Director Bunra Seng, snares are simple and cheap to make, and they capture all kinds of animals, including females and their young and animals with no market value that are left to rot on the forest floor.

The Capture Project placed photographs of wildlife maimed or killed by these snares next to photographs of Cambodian models and celebrities painted with stage makeup that emulate identical injuries. The display also includes an elephant sculpture made entirely of snares removed from Cambodian forests.

“It’s a great way to educate people that snares are very dangerous; people can place a snare to catch a wild pig, but they might catch an elephant instead,” said one 29-year-old shopper. “And by putting the animal pictures next to pictures of people, we can see how painful it is.”

The Capture Project aims to educate urban consumers about how their purchases affect wildlife and inspires them to use their wallets to create change.

Yet not buying bushmeat is only one piece of the solution: CI-Cambodia is also working with rangers from Cambodia’s Ministry of Environment to patrol known snaring hotspots in some of Cambodia’s most important remaining forests, including the Central Cardamom Mountains National Park, Veun Sai Siem Pang National Park, and Prey Lang Wildlife Sanctuary. These rangers remove hundreds of snares per month; a recent three-day patrol alone yielded a staggering 2,000 snares, Seng said.

While these efforts are helping to reduce illegal bushmeat hunting, snares remain too easy and effective for poachers. CI and its partners are working to push for laws that would render setting snares, or possessing the materials to make snares, illegal.

“Cambodia has enormous potential for ecotourism, which is so far undeveloped,” Seng said. “Ecotourism is just one of the ways this amazing biodiversity can serve the country over the long term, especially by bringing income to rural communities. But this can only happen if Cambodia’s forests are protected.

“We need to stop the loss of species before it’s too late.”