From this vantage point in the wintertime, you can see humpback whales in the channel between Lāna‘i and the island of Molokaʻi, which is part of the Hawaiian Islands Humpback Whale National Marine Sanctuary. During the winter, you can also see massive flash floods racing down this canyon when it rains, carving out soil and blanketing the adjacent reef with sediment until the reef takes on the color of a cappuccino.

By contrast, in the summer the Maunalei Gulch is almost bone-dry. As on many Pacific islands, watershed degradation from land-cover change has led to sustained high sediment runoff, which has damaged the nearshore reefs and fisheries that benefit many local people. Deforestation for agriculture, overuse of freshwater resources during the pineapple plantation era and overgrazing by introduced feral deer and mouflon sheep have led to the disappearance of Maunalei Stream — once the only permanent stream on the arid island.

To address these issues, in 2012 the CI Hawaiʻi program started working with Lānaʻi community members to implement a coastal restoration project in the area, combining traditional knowledge and modern science.

In December 2013, with help from CI Hawai‘i, the Maunalei Community Managed Marine Area installed gabions (check dams) made of invasive, non-native kiawe trees in the lower reaches of the dry Maunalei streambed. In partnership with the Pacific Islands Ocean Observing System (PacIOOS) and the University of Hawai‘i, CI Hawaiʻi helped design and deploy an integrated ridge-to-reef monitoring system of sensors which tracked water flow and sediment in the streambed as well as sediment flow onto the reef during the 2014 rainy season.

During that season, this project kept nearly 40,000 pounds — about 20 tons, or the equivalent of 2.5 dump trucks — of sediment off the reef. But was this enough? We needed to evaluate what a difference our efforts had made in improving the adjacent reef’s water quality — and in order to do this, we needed to know how the sediment moves around the reef.

Last summer, together with our university partners and with technical support from PacIOOS, CI Hawaiʻi investigated the fate of sediments at two different locations on the Maunalei reef: one near the outflow of Maunalei Gulch and one next to a small streambed which no longer receives flow even with the winter rains.

We found that due to the action of tides, waves and currents, the time it takes for sediment to leave the reef can vary from days to months in different spots on the reef. Waves and wind cause the sediment to continuously churn through the water rather than settle to the bottom or be swept out of the reef by currents.

Murky waters make it difficult for corals to continue growing and providing benefits such as healthy fish populations. Continuous mixing of the same sediment in the reef can have a multiplier effect, impacting the reef more negatively and over longer periods of time — 20 to 30 times longer, by some estimates from the United States Geological Survey.

We estimated the 20 tons of sediment that we stopped from reaching Maunalei reef may have saved anywhere from nine days to nine months of sediment impact on the reef.

Clearly, more research must be done to refine this time period, but in any case we are tremendously encouraged that our conservation measures appear to have been effective. It is now clear that preventing even a small amount of sediment from reaching the reef makes a huge difference in this setting on Lāna‘i. 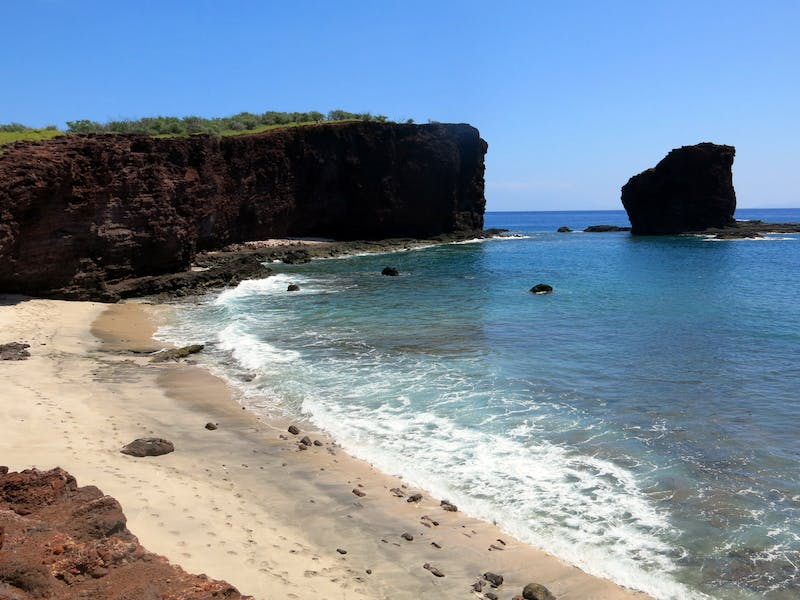 Building on this successful pilot, CI Hawaiʻi was selected as the coastal conservation planning partner to Pūlama Lāna‘i, the company created to manage Lāna‘i by billionaire Larry Ellison, who owns 98% of the island. This is a tremendous opportunity to help shape habitat restoration on an island scale, in an unprecedented partnership between a single large-scale landowner, an environmental nonprofit (CI Hawaiʻi), a federal marine research agency (PacIOOS) and an academic institution (University of Hawai‘i-Mānoa). Together, we’re creating a growing partnership in pursuit of a sustainable marine resource future for Lāna‘i.

Working with Pūlama Lāna‘i, University of Hawai‘i and PacIOOS, CI Hawai‘i will develop more scientific research and maps that will help us collectively learn more about the island-scale sources and sinks of sediment so that we can prioritize land restoration sites and identify at-risk reefs. The goals of this ambitious work are to help improve terrestrial and reef habitat health, develop a detailed plan to monitor restoration measures’ effectiveness and use that information to adapt restoration strategies.

These actions won’t just be good for the island’s ecosystems, but also for Lāna‘i’s more than 3,000 residents. The more we learn about the complex relationships between connected island ecosystems, the more we can ensure that vital areas are protected to ensure that nature can continue to support the people who have depended on it for countless generations.

I hope in the years to come, every time we return to the top of Maunalei Gulch and look down, we will see greener, healthier watersheds that will eventually lead the muddied coastal waters to give way to vibrant corals once again.

Cover image: The steep bare canyon of Maunalei Gulch on the Hawaiian island of Lāna‘i. Watershed degradation from land-cover change has led to significant erosion impacting the reef downstream; CI and partners are working to restore the health of the system from ridge to reef. (© Conservation International/photo by Jack Kittinger)