Reconnecting with nature in the shadow of war 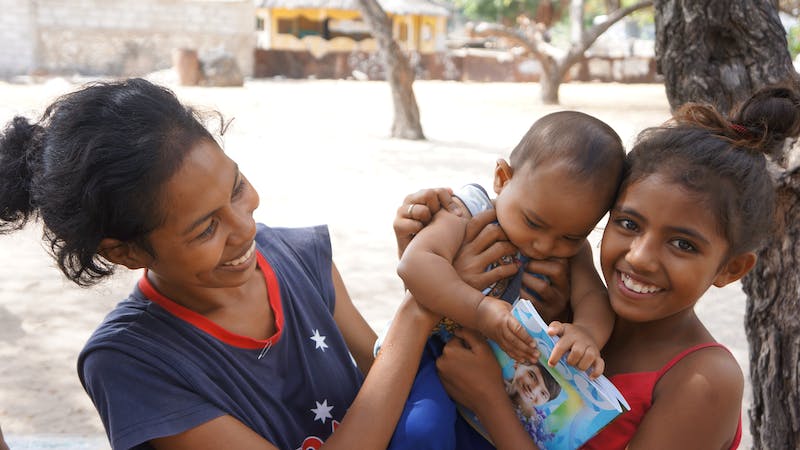 Woman and her children in Timor-Leste. In a country where historic conflict has drastically impacted the environment and community dynamics, CI is helping to spark dialogue between local community members and government officials to promote peace through conservation agreements. (© Conservation International/photo by Lynn Tang)

This is the second blog in our series on environmental peacebuilding, which chronicles CI’s growing role in this emerging field of research. Today’s post focuses on our case study in Timor-Leste.

In my tiny, half-an-island country of Timor-Leste, cemeteries smell of jasmine and come to life on All Saints’ Day. Families have picnics and kids roam wild over the tombstones. Here, stepping on somebody else’s family tombstones is not seen as an offense but as the norm; after all, since there isn’t enough land to hold so many graves, not stepping on one is impossible unless you have mastered levitation.

We eat, drink and pray for our long-gone relatives. We spend small fortunes rebuilding and redecorating our cemetery plots. In my 13 years working and living in Timor-Leste, I’ve found that my compatriots smile and try to use humor to make the best of any situation — a seeming lightheartedness that masks the atrocities endured by so many of them, which have filled so many mass graves.

Over several centuries, the people of Timor-Leste have experienced prolonged periods of war and armed conflict. This history consciously or unconsciously shapes the way in which we Timorese relate to one another and to the natural resources upon which we depend for food and livelihoods.

Timor-Leste was first invaded by Portugal, then by Japan during World War II, then by Indonesia. When we saw our independence restored in 2002, we became Southeast Asia’s youngest nation-state.

As a result of the longstanding waves of conflict, it’s challenging for the Timorese people to invest in a sense of community. Due to relocation of entire villages to new places, the creation of new cities, the renaming of towns and landmarks, transmigration and the logging of our forests, men and women have had to cope with shifting rules and norms about natural resource management, especially who has rights and access to coastal and forest areas.

Most of the time, these natural areas could not cope with this increase in demand for the services that they provide, such as water and food. Driven by famine, and lacking the local knowledge required to interact with these new environments in a sustainable way, our people overexploited most of the areas surrounding the new settlements.

People didn’t know better. Some of them had never before seen the ocean; others had never experienced the hailstorms in the mountains that transverse Timor-Leste. Thrust into these new environments, much of their traditional knowledge that had been passed down for generations was suddenly irrelevant.

This lack of local knowledge — the loss of our sacred connection to nature — compounded the environmental problems we face today, including land degradation, erosion and deforestation caused by increasing demand for fuelwood.

The negative impacts we are seeing go beyond the usual suspects of armed conflict — beyond the napalm-bombed fields, beyond the Agent Orange-sprayed hills. They have damaged the Timorese soul and spirit in ways we are only now coming to grips with.

I have been very fortunate to design and lead CI’s implementation of field programs in Timor-Leste. I have tried to do what CI expects of all its employees, which is to measure success in human terms. Being a zoologist and not being very familiar with this new kind of metrics, I had to learn a lot.

As I began this work, I realized that working with communities to protect what is sacred and dear to all Timorese would require the sharing of knowledge between them. So, building upon CI’s foundation of science, we have brought men and women, elderly and youth, indigenous leaders and government authorities together to forge agreements about how to use and conserve our natural resources. Open dialogue is very challenging in Timor-Leste, given the history of mistrust and changing leadership at all government levels.

CI recognizes the need to instill good governance as a fundamental step in ensuring lasting conservation. The dialogues I facilitated helped men and women — new resource users and traditional users — to learn from each other, consider the other parties’ needs and come up with consensus-driven plans to reduce overexploitation.

For example, in some areas, men agreed to ban certain fishing practices, while women and girls agreed to modify their gleaning practices of gathering marine and coastal resources during low tide. As a result, we helped three communities implement the first government-approved co-management plan for the Nino Konis Santana National Park, with help from the U.S. Agency for International Development’s Coral Triangle Support Program.

The stories shared by community members within this dialogue invariably capture their experiences during times of conflict, as the aftermath of war is believed to be the biggest driver for resource depletion in the nearby national park. CI continues to help communities build a more positive collective view of the present and improve local resource management for the sake of future community well-being.

In the end, people need nature to thrive — perhaps now more than ever, in this era of dwindling resources and changing climate. But the balancing act that is environmental peacebuilding — bringing people together to sustainably manage their natural resources — requires people to help one another, to share and grieve over the loss of the sacred, to re-kindle the old metaphors that mark the Timorese spirit: the forest, the wilderness, the strong and bountiful ocean. As we work toward rescuing these natural treasures, we will unconsciously save our souls in the process.

Rui Pinto is the policy manager for CI Timor-Leste. Raised in Mozambique, Rui’s mother is Timorese; after Timor-Leste declared independence, Rui moved to his mother’s homeland, where he has lived and worked ever since.