While the world was tackling climate change, it was the weather playing havoc.

El Niño, a naturally occurring climate phenomenon characterized by abnormally warm waters in the eastern Pacific Ocean, has upended weather patterns from California to Cambodia, with researchers suggesting that the 2015-16 episode will go down as one of the strongest ever recorded.

Some countries have paid a heavy toll. By the time the world’s attention turned to the Paris climate talks in November 2015, Papua New Guinea was in the grip of severe drought that ravaged agriculture across the country. The El Niño-induced drought affected everything from school operations to women’s labor to public health, according to a review published earlier this month by the Development Policy Centre in Australian National University.

While links between El Niño and climate change have only recently become clearer, what Papua New Guinea has seen in the past year is a harbinger of what is to come for the country in a changing climate, according to David Mitchell, country director of Conservation International (CI) Papua New Guinea. Worse, he says, is that climate change is already adversely affecting marine ecosystems, eroding a critical food “safety net” for drought-affected people in the country’s coastal regions.

In the following Q&A, Mitchell takes stock of the situation.

Question: What happened in Papua New Guinea, and what is the situation like now?

Answer: The drought started early in June or July and had an impact by October when it rained across much of the country. As the days lengthened in November and December, the drought worsened. Then in early January, it rained.

This has helped with water to some extent, but as most food crops have gone through periods of water stress, they either returned reduced crops or failed. … The food security situation is tenuous, even if rain does fall now: Sufficient consistent rain in January at best will not return food until April.

Even with some foreign aid and the allocation of disaster funds from the national government, there are many people who do not have sufficient food each day and who do not have safe water to drink — a situation which became extreme for many in December. Many have survived as they have for generations, by turning to drought foods rarely eaten at other times, by trading with others what they have, by relying on salaried family members in towns to remunerate funds or food back home. … Some survive by eating into their environmental capital to live for now at the cost of their future — cutting firewood for cash, shark finning and heavy trading in turtles are examples I’ve seen.

A: There has been continuous agriculture here for more than 7,000 years, so there is a lot of customary knowledge within the 800+ languages and cultures that make up Papua New Guinea. The diversity of crops within the subsistence agriculture cycle help to buffer some of the variance in the climate. But weather extremes — and these are expected to increase in extremity and frequency — are greater than human memory can recall, and new climatic zones are probably shifting with altitude and longitude.

Before, subsistence farmers used to use indicators like certain trees flowering or the position of certain stars to create a calendar that links to life activities such as gardening and fishing, but many people now say that the indicators no longer match the seasonal patterns. This makes things more unpredictable.

Q: So how do oceanic conditions tie into this?

A: Coral bleaching is tied to higher sea-surface temperatures that are in part tied to incremental increases in the seasonal temperatures and amplified by periods of intense drought. This causes a huge shift in the ecology, and the available food stocks for coastal communities which rely heavily on the sea when their gardens fail. In many coral [reefs], the entire reef ecology will flip to algae. With current trends this is happening within this or the next generation. Then the whole link between people and their sea will change dramatically. 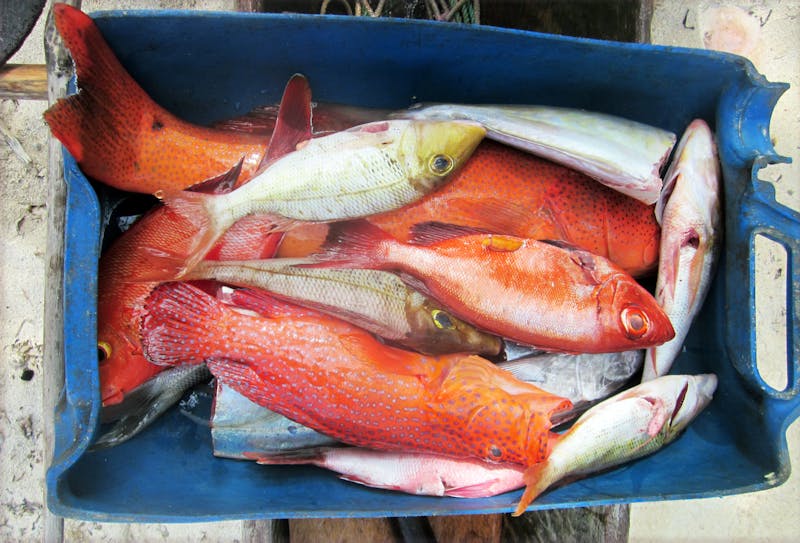 When crops fail, coastal communities turn to reef fish, one of the only sources of food available. This catch, from a reef near the island of Wiyaloki, is the result of a day’s work and will need to feed multiple families. (© Lulu Osembo)

Sea-level rise, meanwhile, is very obvious to coastal communities. Over and over, I hear stories of “Our village used to be out there,” and this is not just 10 but often 20 or 30 meters out to sea. This is especially so where the coast is sand, so beaches are disappearing — fast. Most villages are built out of local materials of sago palm, pandanus or coconut that lasts only around five years, and their size and location can change, but a lot of coastal infrastructure of schools, health centers and roads are under threat. With loss of valuable coastal land to the sea along with a greatly increased population, relocating this infrastructure into the mosaic of customary-owned land is problematic.

Finally, acidification of the ocean [caused by increased carbon in the atmosphere] is slowly and incrementally eroding the fabric of coral and shells, essentially dissolving the calcium carbonate they are made of — such that by 2100 I wonder if there will be shells washed up on the beach anymore. With seafood playing a crucial role in food security, this is yet another issue that coastal people face in Papua New Guinea.

Q: What can be done?

A: Well, the big answer to this is to reduce carbon emissions one person at a time until the world turns the tide on increasing atmospheric carbon and resultant global temperature increase. For the subsistence farmers of Papua New Guinea, however, it is to have an appreciation of the value of their traditional knowledge, a greater understanding of their vulnerabilities, such as the current El Niño, and the sharing of options to adapt to the changing environment within which they live. When the El Niño breaks, it will be a relief, but more importantly we need to learn from it, especially where the local environment upon which we depend has aided us and how.