Editor’s note: Last week President Obama expanded the Papahānaumokuākea Marine National Monument in northwestern Hawai‘i, making it the largest marine protected area (MPA) in the world. But how do lines on a map translate into actual conservation outcomes for the world’s oceans?

It largely comes down to deliberate design, local support and effective enforcement, explains Conservation International (CI) Seascapes Director Laure Katz. In this interview, Katz gives an inside look into how the world’s “biggest common resource” is managed — or not.

Question: What exactly is an MPA?

Answer: A marine protected area, or MPA, is an area of the ocean that has been designated for specific management. According to the International Union for Conservation of Nature (IUCN), classifications of protected areas range from those allowing sustainable use of natural resources, with zones managed for different purposes, to reserves entirely closed off to extractive activities.

Q: How much of the ocean is currently protected?

A: Including the newly expanded Papahānaumokuākea Marine National Monument (PMNM), we’re approaching 4 percent. There’s definitely been a huge uptick in the pace of MPA creation, which is fantastic, but despite recent progress, we still have a major MPA shortage worldwide.

Most marine scientists agree that we need 20 percent to 30 percent of the ocean to be protected, so we’re grossly under-covered globally. Some areas have lower coverage than others, such as the coasts of Africa. Also, only 0.14 percent of the high seas — areas that fall outside of countries’ exclusive economic zones (EEZs) — are protected. The world’s biggest common resource is almost entirely unmanaged.

Q: How does an MPA get established?

A: There are two major ways: bottom-up and top-down. A top-down process is typically led by a national government, which identifies an area for protection for a strategic purpose, whether it’s biodiversity conservation, tourism, fisheries replenishment, etc. Ideally the government then conducts extensive consultations with all of the stakeholders who are connected to the area in some way, but unfortunately that step is not always taken. The government can then delineate the area on a map and designate it as a protected area through a governmental decree. The process can happen fairly quickly, or it can take a very, very long time. Sometimes the decision about where the protected area is placed has a lot of rigor and discussion behind it; other times its exact location is more haphazard.

One advantage of the top-down approach is that given the size of many government-declared MPAs, the declarations can move the needle quickly in terms of global protected area coverage. This approach also by definition has the backing of the government, which will hopefully end up financing it.

The other direction is bottom-up, when the local people that use or own marine resources want to declare and manage a protected area. Bottom-up MPAs typically involve communities coming together, figuring out areas of common interest that they want to protect, declaring the MPA through local ceremonies and then hopefully building it up with further government protections.

The advantage of this approach is immediate support from the people who actually use the place. The disadvantage is that often bottom-up MPA creation leads to smaller declarations because size is limited by the jurisdiction of one village or community.

One of CI’s strengths is melding these two approaches — inspiring and working with communities to establish their own MPAs at increasingly large scales, while simultaneously working with governments to not only involve communities in their decisions, but to also declare bigger protected areas at the scale the ocean needs.

Q: How are MPAs actually enforced?

A: Some are managed well. Others are not. Enforcement is absolutely critical. Without it, an MPA is merely a “paper park.” However, there is no one right way to enforce an MPA. To me, increasing compliance — the voluntary following of rules — is as important as hard enforcement strategies. Efforts to increase compliance usually involve communication and community outreach programs.

Patrol teams can help, too. When enforcement patrol teams catch local first-time offenders, they typically start with so-called “interpretive enforcement,” where the goal is really education. So rather than arresting people for illegal activities in an MPA, they educate violators about where the boundaries are, provide maps and information, explain the policies and purpose of the MPA and then send them on their way. The second time they are caught violating the MPA rules is when arrests start being made.

On the enforcement side, there’s a huge range of techniques, from fairly low-tech boat patrols to more sophisticated technological solutions, with the latter becoming  more critical as the size of MPAs expands. In many community-managed protected areas, where resources are more limited, communities enforce with what they have. Local fishers act as extra eyes on the water, sending text messages to their local patrol team when they see violations.

In Indonesia’s Raja Ampat archipelago, where I have worked for the last nine years, we have one of the most effective enforcement systems in the region. And it’s mostly based on trained community members sharing a small boat with one police officer or law enforcement official. But they are out there kicking the poachers out of their waters.

On the other end of the spectrum, some MPAs have radar systems that can identify boats within a particular range. Conservation drones are being deployed to find illegal boats. And organizations such as Google and NASA are developing all sorts of new technology to be used in larger MPAs and the open seas, including floating buoys that follow illegal ships and collect photo documentation of their activities.

Q: What do you see as the biggest barriers to successful enforcement?

A: For success, you need the full enforcement chain to work. You must be able not only to find out that somebody’s doing illegal activities in the protected area, but also to get that information in time to respond. You must not only have the skills and resources to respond, but the capacity to actually prosecute. People often know illegal activity is happening, but they can’t respond fast enough to catch the perpetrators.

A few years ago in Raja Ampat, we had what we considered a really exciting arrest of multiple large shark-finning vessels inside the MPA. The arrest indicated that our community patrol teams could respond quickly enough to catch the big boats, and everybody was thrilled with that level of progression. But the next day, the police let the fishers go because they didn’t have the money to prosecute or hold them.

Until you can actually prosecute illegal fishers and enforce penalties that can deter others, it’s all for nothing. You have to complete that chain. We must find that balance of investing in the technology that’s going to help us find perpetrators while also ensuring that we have capacity on the ground to actually respond.

Q: Is there a “poster” MPA? How about one country that is doing MPAs especially well?

A: For me, it was always the Galápagos Marine Reserve, with its hammerheads and whale sharks. But over the years studying and visiting those enchanted islands, I have come to learn that protecting a place, even one as iconic as the Galápagos, is never simple.

Many countries in the Pacific are kicking butt right now in terms of the marine protection commitments they’ve made under the framework of the Pacific Oceanscape. Kiribati, the Cook Islands and New Caledonia have made particularly impressive steps toward MPA creation. The U.S. has by far the most extensive sanctuary system, with sanctuaries along both its coasts. The recent expansion of the PNMN — now the biggest MPA in the world — only strengthens that reputation.

Q: How will sea-level rise affect any of this?

A: There’s a big debate in the Pacific right now about this issue. As islands disappear from sea-level rise attributed to climate change, will nations maintain their EEZ boundaries? Or will they lose those EEZs as rising seas cover their islands? And if they do lose their rights to their waters (and any MPAs they may contain), who gets control over them? These questions have yet to be fully answered.

More generally, sea-level rise will only strengthen the importance of MPAs. These areas are critical to protect coastal ecosystems, including mangroves, and so as the water level rises and communities are increasingly vulnerable to wave energy from the seas, the MPAs that preserve and restore the ecosystems standing between people’s homes and the ocean will be even more crucial. 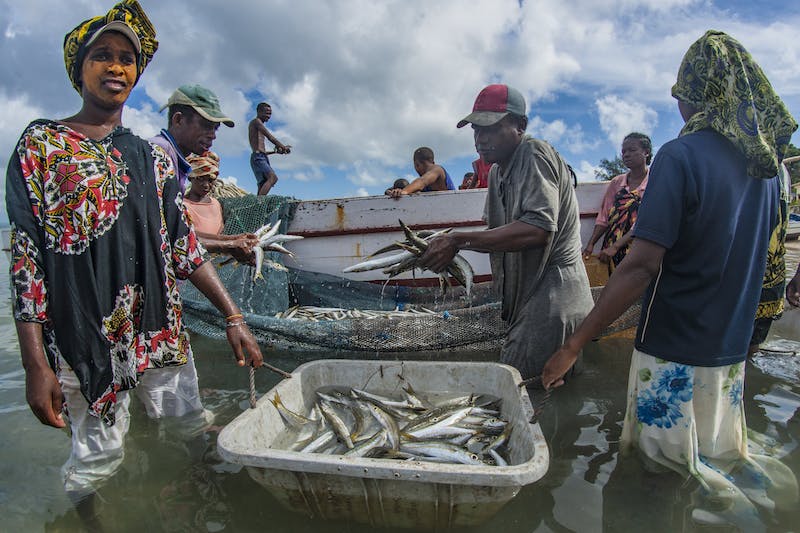 These indigenous Betsimaraka ﬁshermen in eastern Madagascar live by a simple principle: take only what you need and use everything you take. In coastal communities around the world, artisanal fishers are often the first advocates for the establishment of marine protected areas in order to protect the source of their livelihoods. (© Cristina Mittermeier)

Q: What do you wish more people understood about MPAs?

A: One, many people think that MPAs are closed-off areas for biodiversity conservation. While this is one of their functions, I think this is a limited view of their purpose. MPAs can provide all sorts of benefits, from employment to tourism opportunities to fisheries restoration. However, they need to be specifically designed to meet those objectives. An MPA designed solely for biodiversity conservation would look different than one focused on local fisheries production.

The second thing is that MPAs are difficult. It’s not as simple as drawing a line on a map — though that can be a challenge in itself. But the steps going from declaration to an effectively managed protected area — designing, zoning, monitoring, building enforcement systems, all while continually communicating the MPA’s value back to ocean resource users — are a huge amount of work. I think the most important thing missing in a lot of MPA management is the deep involvement of communities and other ocean users in these processes — not just consulting them, but treating them as true partners in MPA creation and management.

Third, we need to spend more energy on making MPAs work. I would like to see more investment in making MPAs operational, effective and sustained, including sustainable financing. With ever-increasing demands on the ocean, and a global trend toward protected areas being reduced in size or losing their protection, we need to recognize the celebration of a new MPA as the beginning rather than the end of our work to secure these important places forever.