Photo essay: In South Africa, a woman’s struggle to sustain the land that sustains her 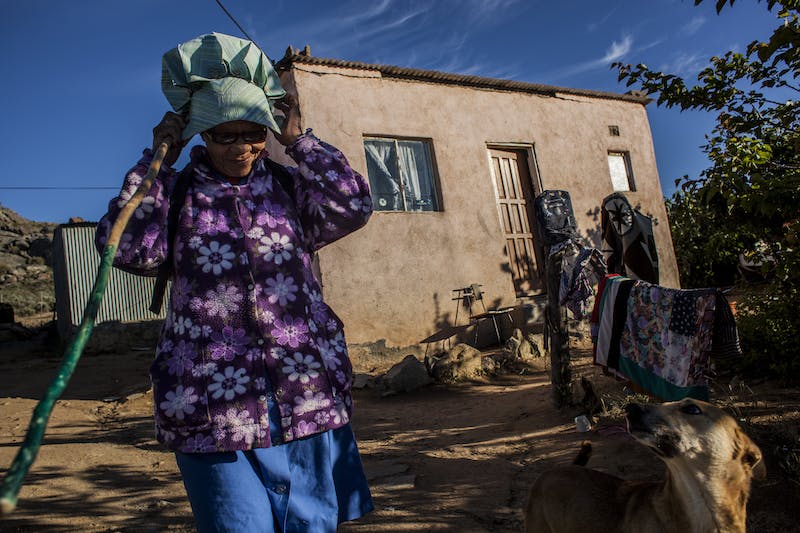 Shepherd Gertruida Cloete, 70, prepares for a day following her livestock as they graze near Leliefontein, South Africa. (© Charlie Shoemaker)

In honor of International Women’s Day (March 8), Human Nature is spotlighting “conservation heroines” around the globe. In this piece, photographer Charlie Shoemaker and Conservation South Africa’s (CSA) Tessa Mildenhall spent a day with Gertruida Cloete, a herder in Namaqualand who — at an age when many people are slowing down — continues to face daily hardships while struggling to make a living and protect her fragile, wild homeland. 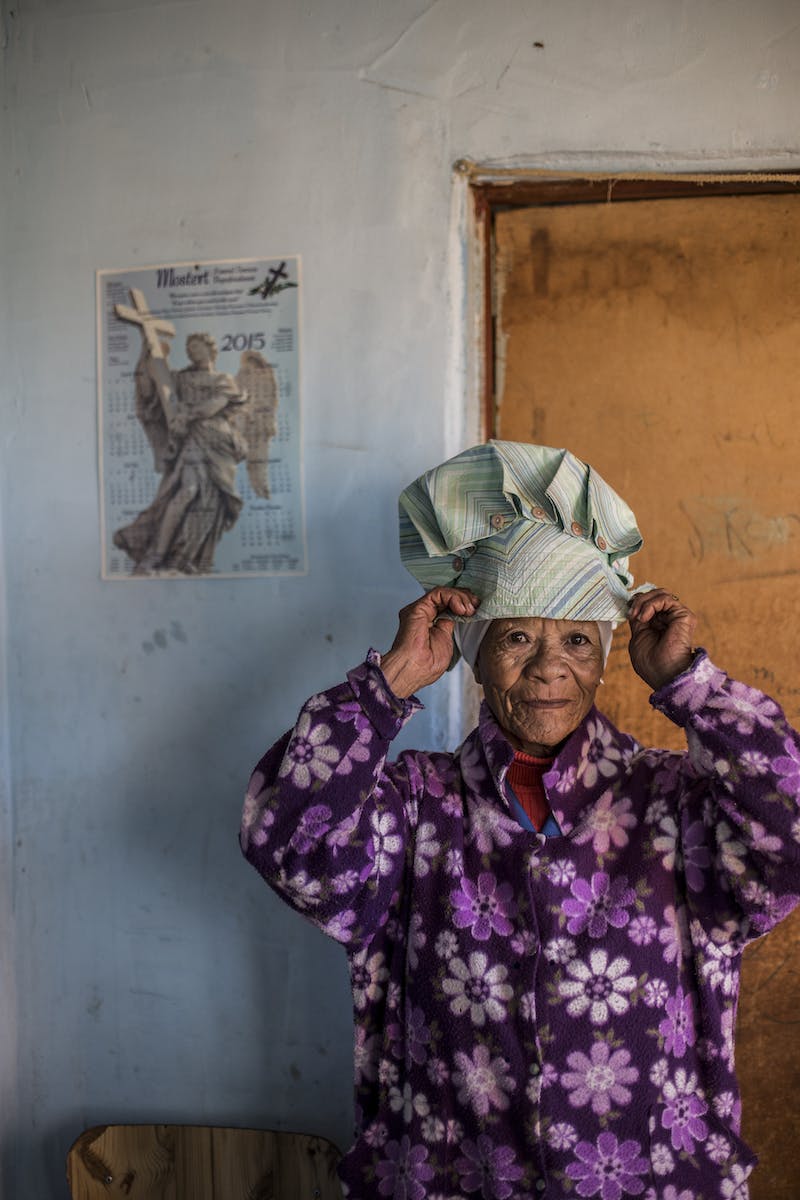 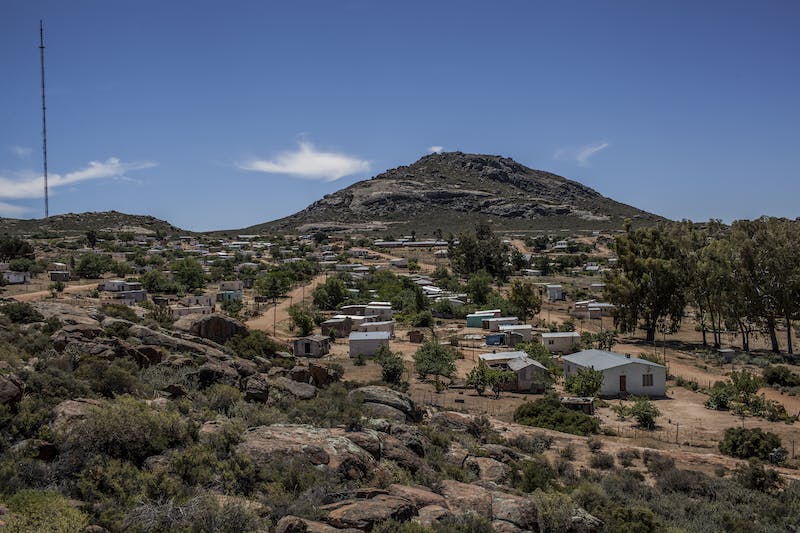 The town of Leliefontein in the Northern Cape of South Africa. (© Charlie Shoemaker)

Cloete lives with her adult son, Werner, who has disabilities. Since her husband, James, died many years ago, Cloete has become the head of her household and the main breadwinner. Her son helps out as best he can, but they are very poor.

Cloete typically wakes up well before sunrise, makes a fire to boil water for tea and then packs her knapsack with food (often bread with mutton or goat meat left over from last night’s dinner) for the day. She then walks about 3 kilometers from her home to Rooikoppies (Red Hills), the area where her livestock are kept. 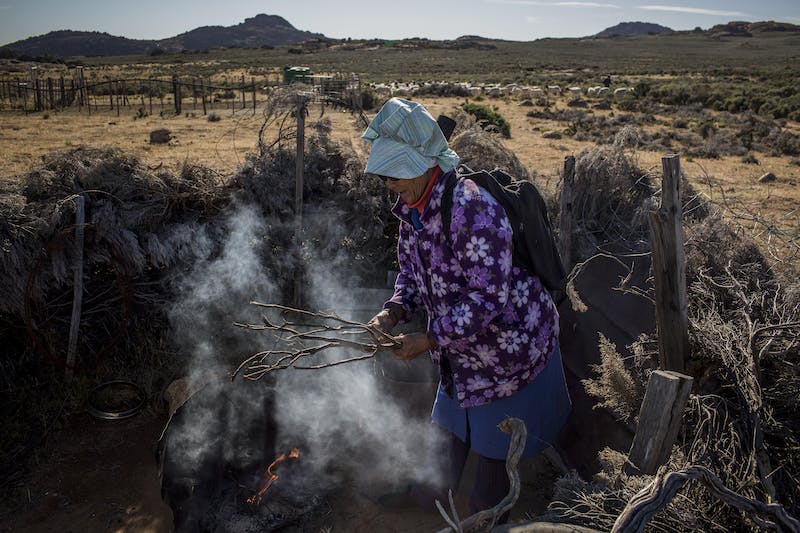 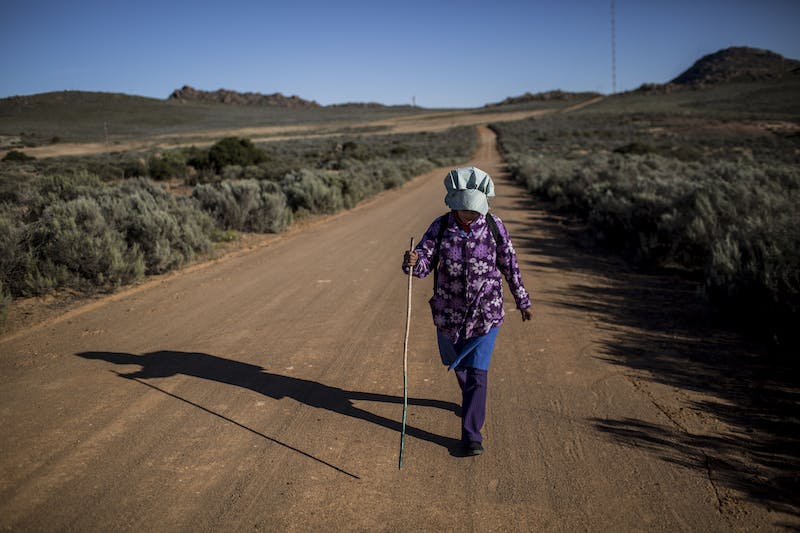 Cloete walks about 3 kilometers from her home to the area where her livestock are kept. As a herder, her livestock represents her wealth, as it is her main source of income. (© Charlie Shoemaker)

She checks all her sheep and goats to make sure they are all healthy, then releases them from the kraal (enclosure). From then until 4 p.m., when she returns to kraal her livestock again, she follows her animals as they graze. 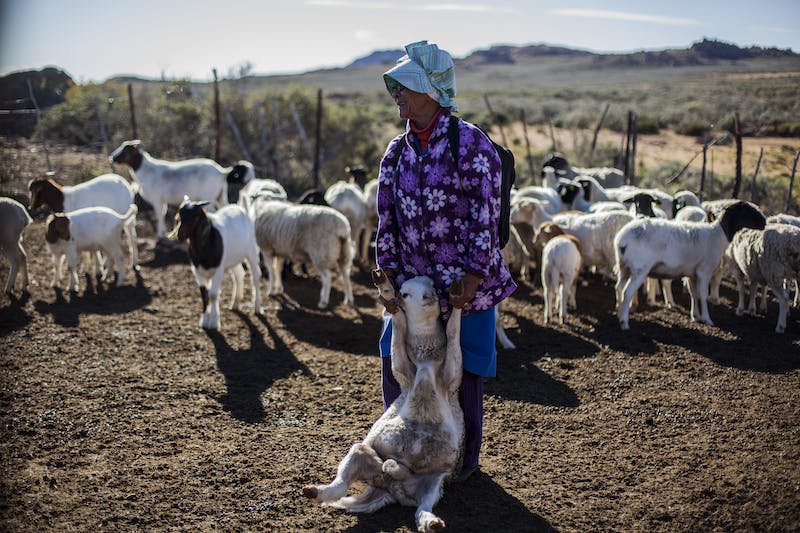 Cloete checks the health of all her sheeps and goats before releasing them from their enclosure to graze. (© Charlie Shoemaker)

Cloete is a member of the Biodiversity and Red Meat farming cooperative, which was established with the help of Conservation South Africa. Through the cooperative, farmers are given a range of incentives to help maintain the condition of the veld (grassland) and the water in their pastures. Given that climate change is expected to negatively impact the sustainability of farming here, communities must change their traditional practices. 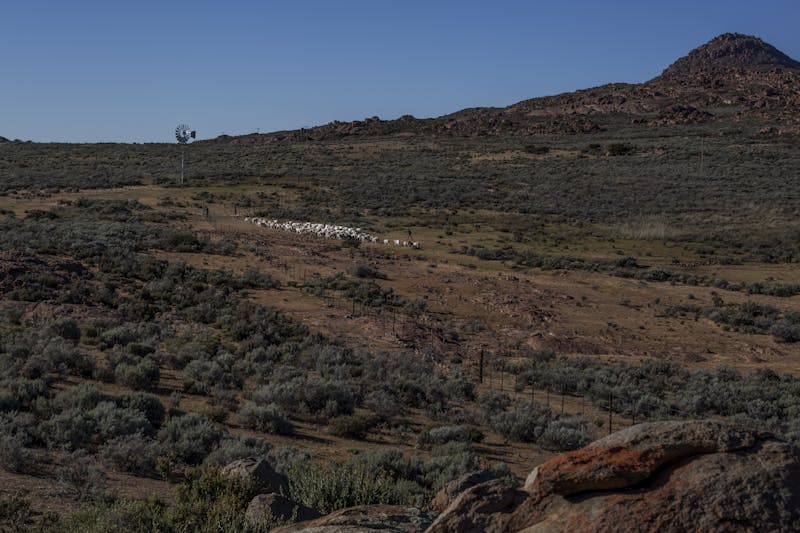 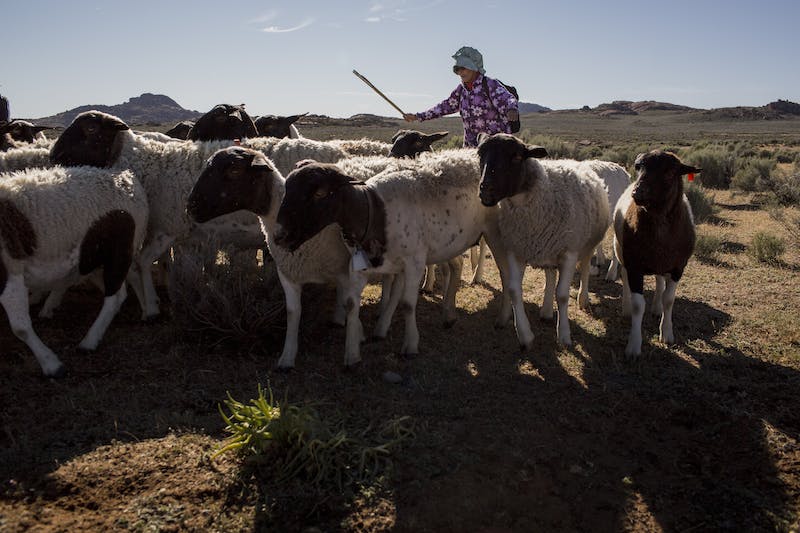 Putting what she’s learned through the initiative into practice, Cloete moves her animals around so that they don’t overgraze the land and encourage desertification. This land needs to keep on feeding her animals, so she hates to see signs of erosion or the formation of a gully — it means less food can grow here. 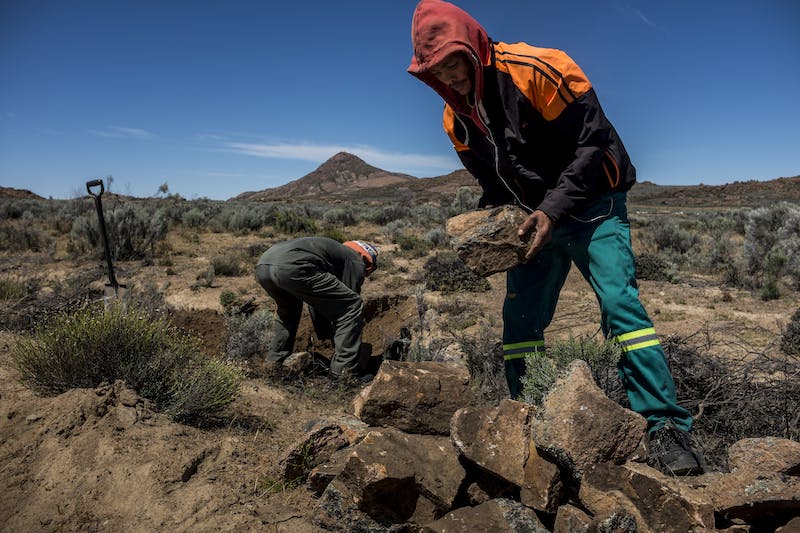 About 50 people in the district have been trained and employed by CSA as restoration workers. The teams have constructed hundreds of structures which slow the flow of water and halt erosion on grazing lands. They also help farmers like Cloete handle their livestock during sales, as well as assist with disease control and livestock-breeding activities. 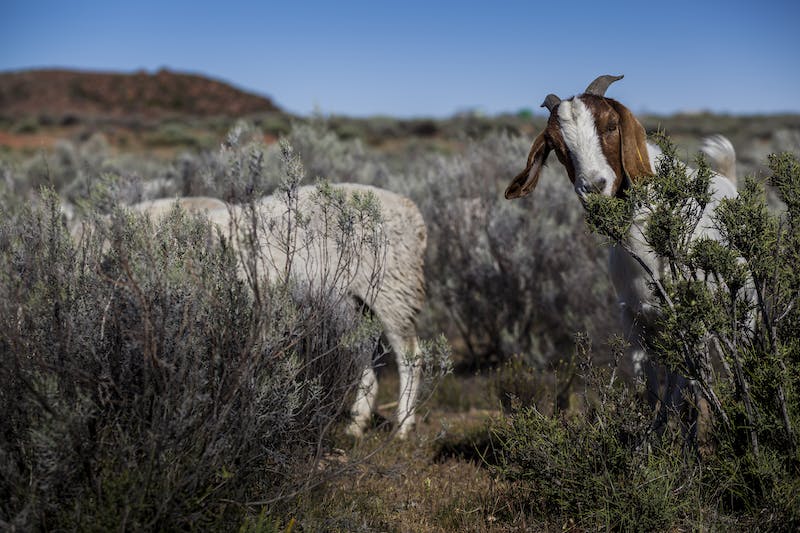 At the end of the day, Cloete puts her animals back in the enclosure to keep them together and safe from the leopards, caracals and jackals that roam the mountains — and which are one reason she stays with her livestock all day. Predators would take a huge toll on her household income. 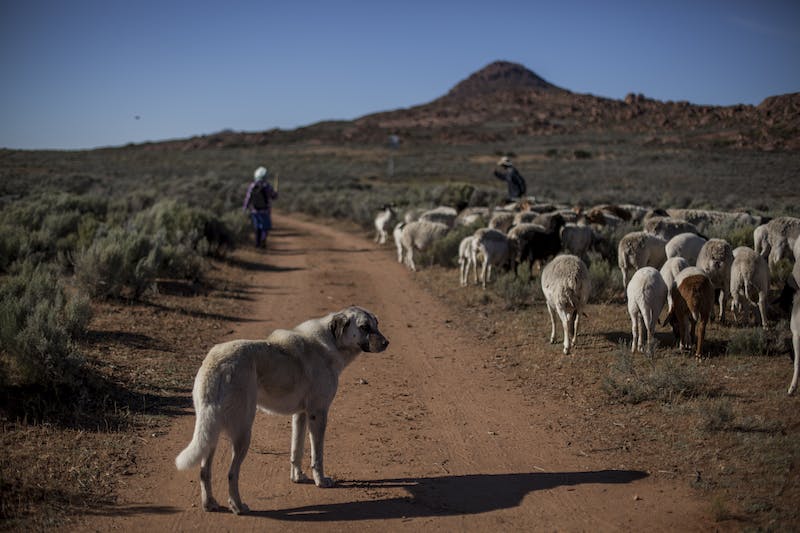 Many Namaqualand farmers use Anatolian shepherds to deter predators like leopards, caracals and jackals from preying on their livestock. (© Charlie Shoemaker)

During the winter, Cloete’s schedule is a bit different, as she makes the strenuous trip down Eselskop Mountain with her livestock to the warmer Tweerivier area. Even at her advanced age, she usually stays there for the whole season, living in a hut nearby. In late spring, she walks her livestock back up to Rooikoppies.

She knows how important it is to keep her animals healthy; many of her newborn lambs died during a recent cold snap. CSA is helping farmers maintain a healthy stock by providing more climate-resilient breeds of animals, including crossbreed sheep known as “Meatmasters” and Boer goats, which are native to the area. 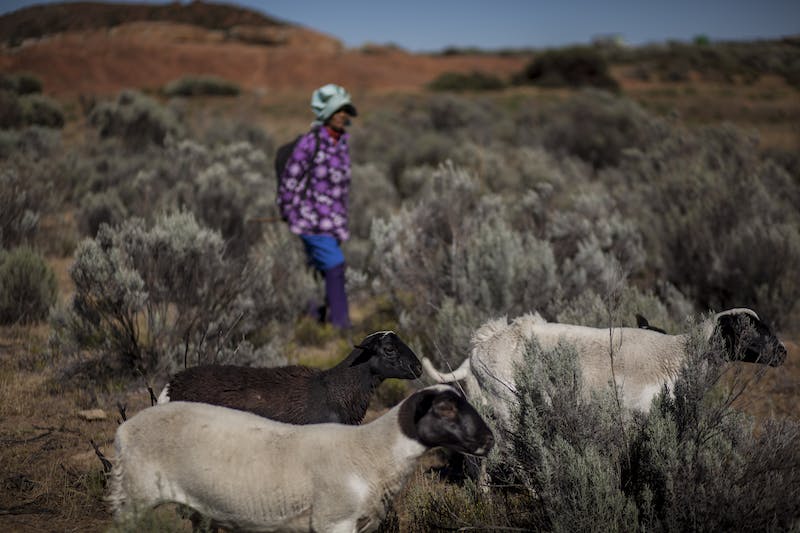 Cloete follows her animals as they graze not just to protect them from predators, but to make sure they don’t overgraze the land, which encourages desertification. (© Charlie Shoemaker)

Cloete now has some of these hardy animals in her flock. Well-suited to dry conditions, they also have minimal impact on vegetation because they eat a wider variety of plant species than conventional breeds, which tend to graze on certain plants until they’re completely gone. 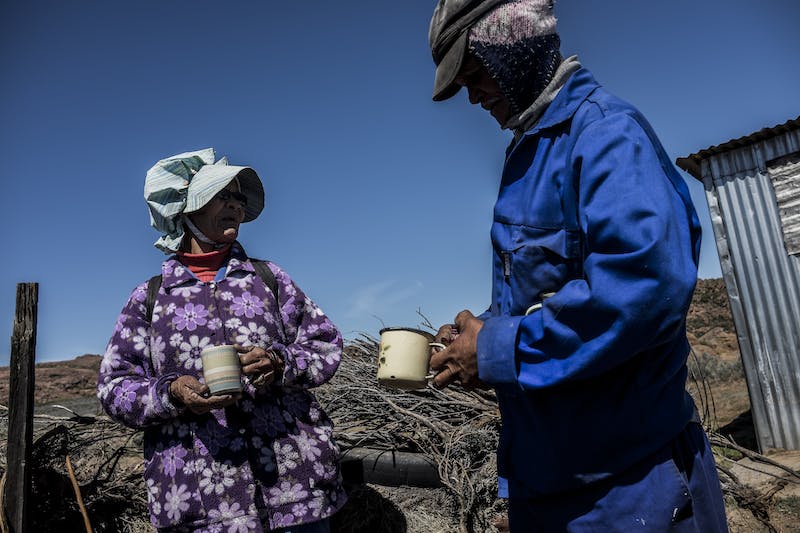 Taken together, all of these activities combine to increase the survival rates of livestock in Namaqualand. When farmers can be more reliant on their animals’ survival, they can maintain smaller herds and further reduce the risk of overgrazing.

Cloete reports that she doesn’t get bored with her job. She says she loves to look after her animals — after all, they are her money, and she likes to watch her wealth grow before her eyes. 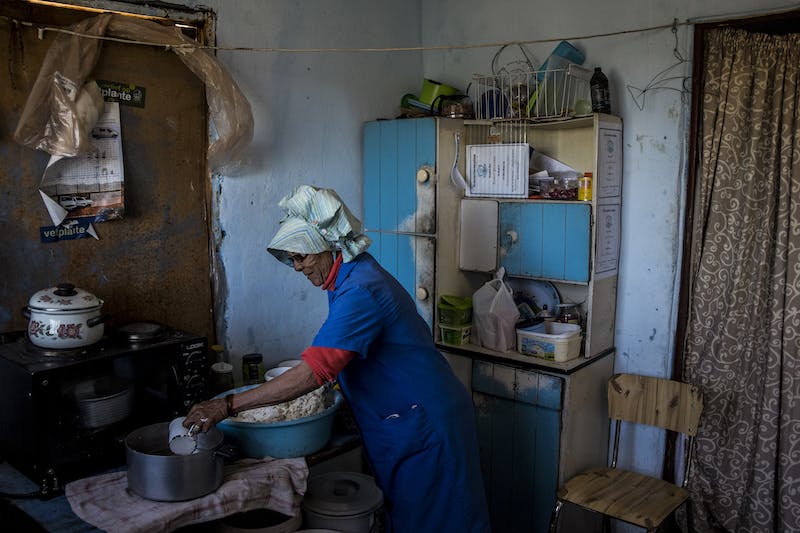 At the end of the day, Cloete usually makes her own bread from scratch, using yeast from potatoes. (© Charlie Shoemaker)

Farming is the only life she has known, and she’s very self-sufficient. She is equally adept at making veldskoene (shoes) and fixing fences. During the rare times when she’s not working, she loves to sing in the church choir; according to her neighbors Cloete has a beautiful singing voice.

Research has shown that climate change will disproportionately affect women, as they make up 70% of the world’s poor and often have less capacity to adapt to environmental changes than men. By helping them make their livelihoods more sustainable, Conservation International is helping women like Cloete to get on equal footing. The women will undoubtedly take it from there. 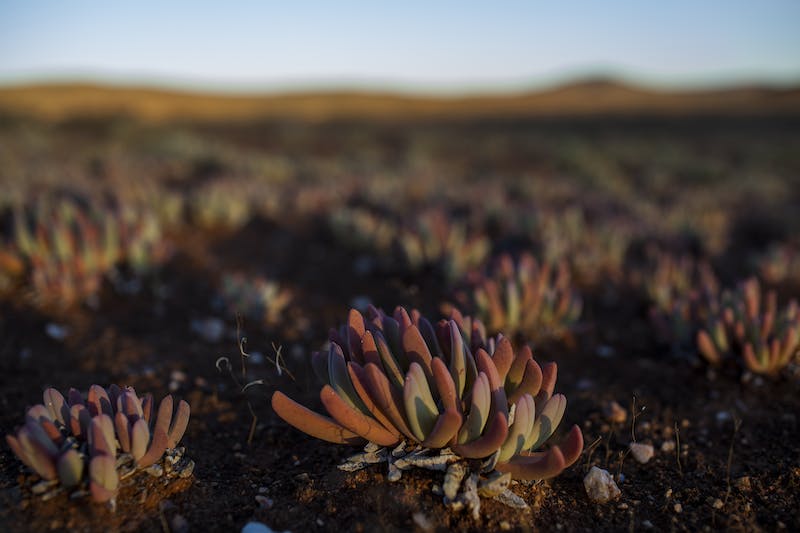 Tessa Mildenhall is the communications and fundraising director of Conservation South Africa, an affiliate organization of CI.