One year after devastation in Fiji, resilience takes root

Editor’s note: Human Nature is exploring the complexities of living in, using and protecting one of the planet’s most valuable types of ecosystems — tropical forests — in a series we’re calling “No forest, no future.” Read other posts in this series.

A year after Tropical Cyclone Winston — the largest storm on record in the Southern Hemisphere — whipped across Fiji’s main island on Feb. 20, 2016, remnants of the storm’s devastation and ferocity remain. Villages are still distinguished by partially reconstructed houses, the result of material shortages following the storm. UNICEF tents are scattered across the landscape. In hard-hit areas, Fiji’s coral reefs are now fragmented, damaged by pounding waves fueled by winds gusting over 200 kilometers (124 miles) an hour.

For many, the memories of Cyclone Winston remain vivid and painful.

The recovery process has not been easy — and is by no means complete. The government’s official disaster assessment estimates that the cyclone caused US$ 900 million of loss and damage in Fiji. Although an assessment of Fiji’s agriculture sector (defined as forests, crops, sugar cane, livestock and fisheries) showed that crops and fisheries experienced the most destruction, forests were not immune, sustaining US$ 14.2 million in loss and damage. Overall, experts estimate that it will take five to 10 years for Fiji to return to pre-disaster levels of economic production.

In light of the extensive environmental damage, the hardest-hit communities are not only rebuilding their houses and schools, but also restoring their forests and other ecosystems to bolster them against future storms. 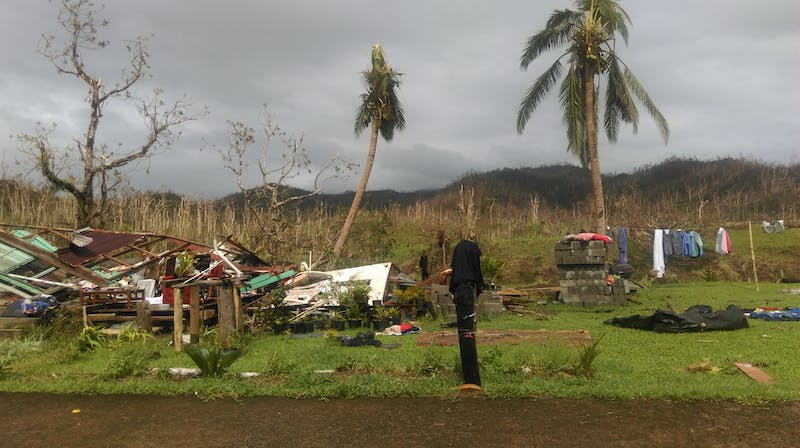 When Cyclone Winston made landfall in Ra province in the north of the island, it destroyed everything in its path: homes, schools and farms. For miles, the winding dirt roads connecting Fiji’s heartland with the coast were blocked by fallen trees and debris; cell phone towers and power lines were downed across the country; and Fiji’s interior villages were left without help, some for weeks.

With limited resources available and many people in need, residents across the country pitched in to help. Three days after the storm, Conservation International (CI) Fiji Field Officer Nemani Vuniwaqa loaded his truck with a small, dedicated team, a chainsaw and one determined goal: to reach CI’s partner communities in Tokaimalo district, just south of the Nakauvadra mountain range in Ra province.

Although over half of Fiji’s land remains forested, Nakauvadra and the surrounding valley have suffered decades of flash fires and the conversion of forest into land for grazing and livestock production. To conserve Nakauvadra’s remaining standing forest and restore the landscape, since 2009 CI has worked with communities to replant trees as well as develop sustainable farms, tree nurseries and cooperatives for beekeeping, an important source of livelihood in the region. Most of these projects were destroyed in the storm.

It took two days for Vuniwaqa and his team to clear the road to the town of Tokaimalo, rebuilding a collapsed bridge and removing fallen trees. When they reached the villages, they surveyed the extensive damage, distributed light provisions including water and rice, and rushed an injured man to the hospital. Perhaps most important, they shared the grief and devastation of the event with the villagers.

In the aftermath of the storm, communities, regional organizations, government, NGOs, private companies and the United Nations pulled together to support the tens of thousands left homeless, disperse food and water and rebuild Fiji’s infrastructure. CI continued relief efforts to communities in Ra, ordering replacement water tanks, distributing small bundles of supplies for reconstruction and seeds to restore damaged farms.

Though the force of Cyclone Winston set a record for the Southern Hemisphere, it may not stand for long. Climate change impacts, such as the growing frequency and intensity of weather events and sea-level rise, are being felt across the Pacific Islands. On land, rising temperatures threaten crop productivity and food security; in the ocean, higher temperatures have led to ocean acidification and coral bleaching, damaging the region’s vulnerable reefs and fisheries. Despite producing only 0.03 percent of the world’s emissions of carbon dioxide from fuel combustion, Pacific Islanders are among the most climate-vulnerable on Earth.

CI is working across the Pacific Islands to help communities adapt, including helping people sustainably manage their rivers, farms and forests. After seven years of planting in Ra province, the reforestation of 1,135 hectares (2,804 acres) of degraded grasslands has demonstrated the power of trees: Community members now remark that their land is greener, more fertile and less prone to flooding. More trees reduce erosion and improve soil quality, thus increasing crop production; they also cool the air, and their fruit and nuts are staple food items for remote communities. When a forest is protected or restored, these collective benefits improve the ecosystem, making it more resistant to external shocks such as floods or storms than a degraded forest — or no forest at all.

‘Now they are growing’

On a recent sunny morning in Tokaimalo, Qiokata Naulivou looked out across his district from atop a mountain in the Nakauvadra range. “The reforestation has changed the land,” Naulivou said. A native of Ra, he has worked with CI since 2009. “It used to be bare and dry, and now it is healthier … Certain areas where we thought things wouldn’t grow — now they are growing.”

A farmer by trade, Naulivou is now an expert in tree planting and nursery management. With him and others, CI is now replanting trees along Nakauvadra to replace the young saplings that didn’t survive the storm. 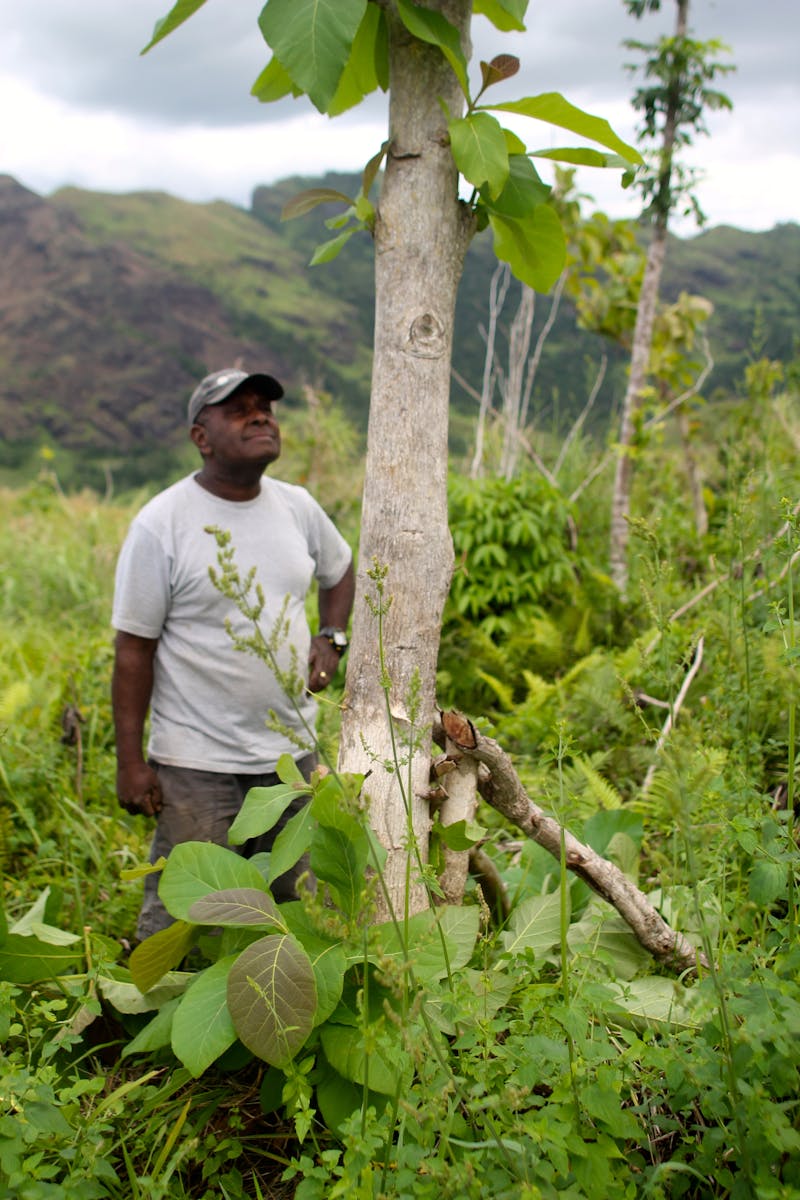 Before the storm, farmer Vereta Bolaniwaqa, from the village of Nayaulevu, had planted a mix of sandalwood trees and ginger on his land. Of his 400 sandalwood trees, fewer than 150 remain. “I also had two acres of ginger,” he explained, “all destroyed by the cyclone.” While replanting trees will not make an area immune to damage from future storms, it can create more productive land that is better able to bounce back afterward.

Looking ahead, in partnership with the Ministry of Agriculture and the United Nations Food and Agriculture Organization, CI aims to help rural Fijian farmers get back on their feet. Under a new project, CI and partners aim to bolster livelihoods by improving agricultural supply chains and connecting Ra’s rural farmers to the domestic market. CI will also help farmers adopt sustainable farming techniques, such as crop rotation and use of cover crops — good for people and for the planet.

Restoring forests has another benefit for Fiji’s farmers: Throughout the country, beekeeping has become one of the most productive, lucrative, sustainable income-generating activities for rural farmers.

Prior to Winston, Fiji’s honey market was estimated to be worth US$ 1.7 million. Under the reforestation project, CI invested in training and provided infrastructure for beekeepers in Ra to advance their trade and improve household incomes. Thanks to strong community motivation, this investment grew to become the Tokaimalo Honey Cooperative, a successful community-run organizations in Ra. Since the substantial damage caused by the cyclone, communities have worked to restore their beehives and rebuild the honey processing center. The bees have bounced back and the communities are pleased to see the honey flowing once again.

Difficult work remains, but one thing is clear: These communities are not alone, and the road to recovery will be a collective effort. In Fiji and across the Pacific, CI is committed to helping islanders maintain their communities, environments and cultural way of life with dignity and resilience.

Bridget Kennedy is the development manager for CI’s Asia-Pacific Field Division, based in Fiji.