On the trail of the South Pacific’s great humpbacks 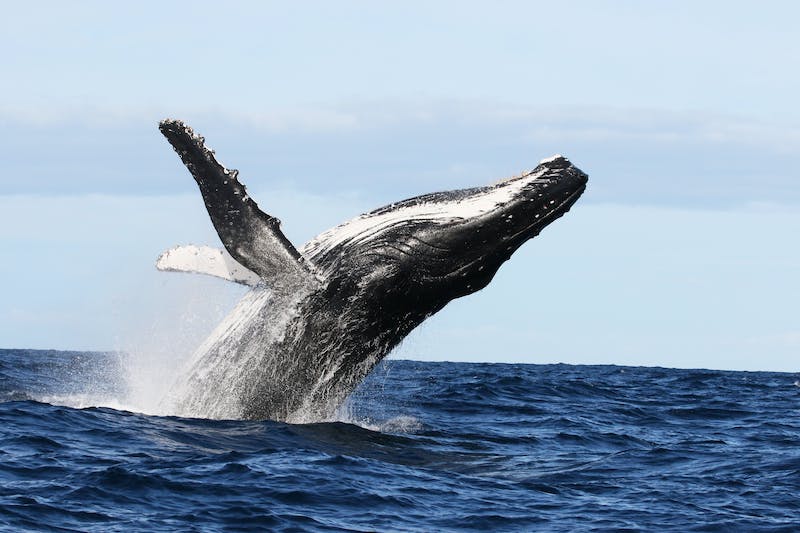 Humpback whale breaching in Kermadec Islands, New Zealand. CI’s Olive Andrews was recently part of a team of researchers conducting the first whale survey around Raoul Island, which is part of the Kermadec island chain. (© Conservation International/photo by Olive Andrews)

More people reach the summit of Mount Everest annually than make it to Raoul Island.

It wasn’t the lure of summiting the tiny Pacific island’s volcano that drew me there — it was the whales.

Halfway between New Zealand and Tonga in the South Pacific, Raoul is an uninhabited, anvil-shaped 28-square-kilometer (11-square-mile) speck, covered in subtropical moist forest and once an important stopover for Polynesian voyagers. The island also appears to be an important stopover for humpback whales as they make their way through the South Pacific to their Antarctic feeding grounds. These whales have been heavily exploited over the past century, and their population is still threatened with extinction.

I was recently part of an international team on the “Great Humpback Whale Trail,” a research expedition to satellite-tag, photo-identify, record songs and collect tissue samples from these whales. All of us have spent many years researching humpback whales in their Pacific island breeding grounds, and we jumped at the chance to visit Raoul — a place that had never been surveyed for marine mammals.

Our timing couldn’t have been better. During our trip, the New Zealand government announced that the area comprising the 200 nautical miles around the Kermadec Islands will become the Kermadec Ocean Sanctuary, one of the world’s newest and largest marine reserves. This historic declaration made us even more determined to expand scientific knowledge about this newly protected place. 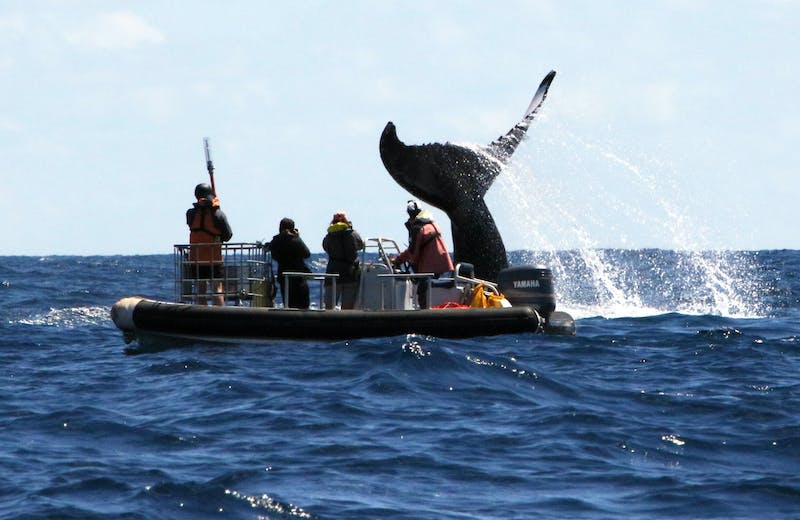 The humpback research team gets a close look at one of their subjects. (© Conservation International/photo by Olive Andrews)

Our 13 days on the water were full of challenging conditions — after all, we were working from a boat that was one-fourth the size of our study subjects. But what we found was worth it — and is already changing our understanding about these amazing creatures.

Eyes in the sky

We fitted 25 whales with satellite tags that will track the whales’ journey to their Antarctic feeding grounds. Because Antarctic waters are extremely remote and difficult to reach by boat, satellite data is currently the best way to learn more about where these animals are going to feed.

The tags are already transmitting, and we are receiving updates from our colleagues at the Australian Antarctic Division. Our southernmost whale has passed New Zealand and is now heading down the Colville Ridge en route to Antarctica. 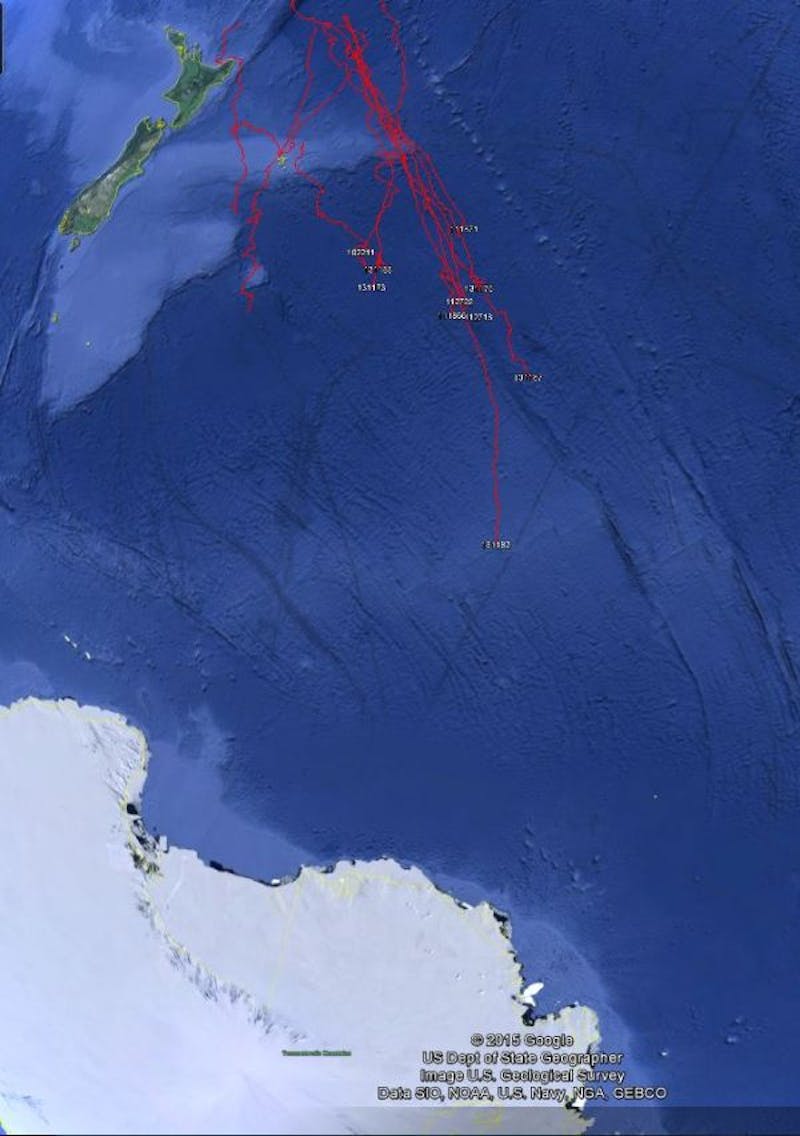 Map of recent humpback movements as tracked by satellite tags. The whales are on their way to Antarctic feeding grounds. (Courtesy of Australian Antarctic Division)

From the tracks, it appears the Kermadec Islands represent an important aggregation site for the whales. They also appear to be heading to the Amundsen Sea and West Antarctica — a much longer swim between breeding and feeding grounds than their neighbors on the eastern Australian coast.

This longer journey requires much more energy, which may explain why this population of whales is recovering a lot more slowly and why they need extra protection measures. 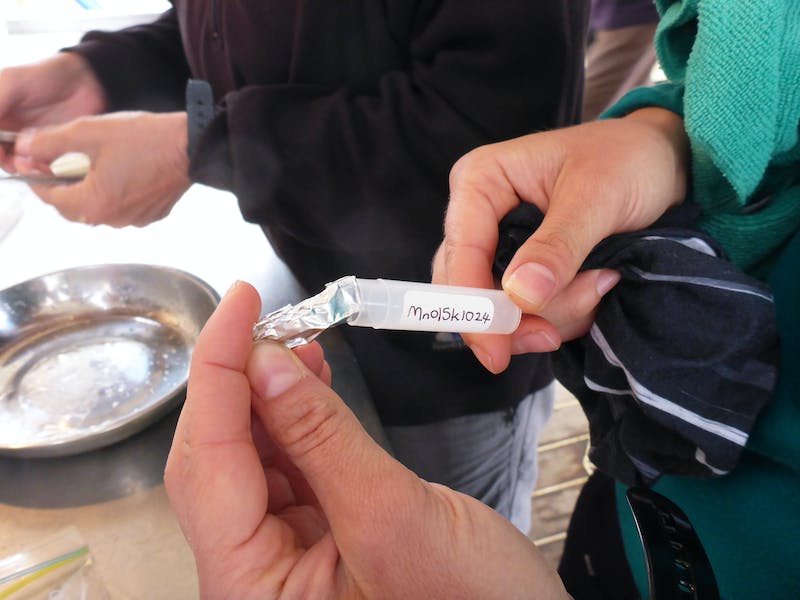 Using a customized crossbow that shoots tiny darts, we collected 85 tissue samples from individual whales. Once analyzed for DNA and fatty acids, these samples will tell us about the whales’ sex, who they are related to, age and what they feed on when in Antarctic waters.

Using a telephoto lens, we were also able to photograph 146 whales individually identified by the unique pattern of marks on the underside of their tail flukes and shape of the dorsal fin. We are comparing these photos to the ones in our existing Pacific catalogue to see if our Kermadec whales have been seen anywhere else. Remarkably, we have two matches already: one whale that was seen in Niue in 2014, and another seen in New Caledonia in 2011.

Song of the sea

Male humpback whales sing a beautiful, complex song while in tropical breeding grounds and during migration. All of the males at each breeding ground sing the same song, yet every year the song is different.

The purpose of the song is also complex. Its main function is to attract a mate, but research suggests that singing males also attract other males. In this way, the song is learned and transmitted across the entire Pacific ocean basin, originating on the east coast of Australia and moving east over time. This evidence is the largest-scale documentation of cultural learning outside of humans.

One of my tasks on the expedition was to record these songs using an underwater microphone called a hydrophone. This helps us match the patterns to geographic areas as another way of knowing where the Kermadec whales are coming from and going to. Whales also use a fascinating array of other social sounds to communicate, and we have been lucky enough to capture some of these. (Click on the sound file below.)

Although our primary focus was humpback whales, we also encountered a number of other interesting marine species.

On one occasion, a 20-meter (66-foot) pygmy blue whale came to check out our small boat.

Another day we saw a sad but remarkable site: a huge 4-meter (13-foot) great white shark feeding on a dead humpback whale calf. (See for yourself in this drone footage captured by Steve Hathaway.)

Upon seeing our footage, New Zealand Department of Conservation shark specialist, Clinton Duffy, identified this shark as a known individual first seen near southern New Zealand in 2010. The animal has traveled as far as the Chesterfield Islands and back — a 1,500-kilometer (930-mile) swim!

As we continue to track the paths of these humpbacks across the world’s largest ocean, we learn more every day about just how vast their ranges are — underscoring that conserving a migratory species in one place won’t save it if another area remains unprotected.

As the NGO founding partner in the Pacific Oceanscape, CI has been working with 23 Pacific Island nations and territories to create and implement a framework that improves the management of their collective waters — an area four times the size of the United States. Given our growing understanding of the region’s importance, making the new protected area a commitment to the Pacific Oceanscape would enable it to share experience, research and collaboration with other sites across the Pacific’s most unique and vital waters.

Olive Andrews is the marine program manager for CI New Zealand and Pacific Islands. In addition to CI, this expedition included researchers from the University of Auckland, Institut de Recherche pour Developpement, Blue Planet Marine and Opération Cétacés. It was supported by the Pew Foundation, the Auckland Museum, New Zealand’s Ministry for Primary Industries, and the Australian Antarctic Division.