On remote Philippine island, female forest rangers are a force to be reckoned with

In honor of International Women’s Day (March 8), Human Nature is spotlighting “conservation heroines” around the globe. In this piece, we meet Nolsita Siyang, an indigenous farmer and mother of 10 who also finds time to patrol her community’s ancestral home as a forest ranger.

Nolsita Siyang has not had an easy life. A member of the Palawan indigenous group on the southern end of the Philippine island of the same name, she has spent most of her nearly five decades farming a small plot of land on the slopes of the Mount Mantalingahan mountain range.

Siyang lives in Raang, a mist-shrouded, thatch-roofed village accessible only by a winding footpath that becomes a river of mud during the rainy season.

About 10 years ago, her husband, Federico, had a stroke, leaving him mostly incapacitated. Now the family relies primarily on the income she brings in. Each week, Siyang — usually accompanied by several of her 10 children — trudges several kilometers down the footpath from her village to the market in the lowlands, carrying surplus corn, peanuts and other wares on her back in hopes of making a sale.

Between caring for her land, making trips to the market and looking after her family, Siyang doesn’t have a lot of spare time, yet she chooses to spend it volunteering as a forest ranger, patrolling the protected area surrounding her village.

Why does she do this? Siyang’s community is linked to the land by tradition, spirituality and survival. If the land isn’t protected, life as she knows it will cease to exist. Together with her only daughter, she is proving that women play a vital role in securing their community’s future.

The Palawan people are believed to be the descendants of the first settlers of the island, who may have arrived more than 50,000 years ago. Even today, the island’s sparse, pot-holed roads and lush greenery feel far removed from the air-conditioned shopping malls and urban sprawl that characterizes much of modern Philippines.

Most of the 12,000 or so people who identify as Palawan live in small villages around Mount Mantalingahan, the highest peak on the island and considered sacred by locals. In Siyang’s words: “The forest is our home, and has a direct connection to our daily lives.”

Palawan people observe a traditional boundary system called bertas, which identifies sacred sites based on myths passed down by their ancestors. These areas are left undisturbed based on the belief that the nature they contain has unseen guardians. These parcels of forest are interspersed with areas where indigenous people regularly hunt, grow crops and gather forest products, from wild vegetables to medicinal plants to reeds used for weaving intricate Palawan baskets.

Recognizing the need to conserve this vital place, Palawan communities were instrumental in establishing the Mount Mantalingahan Protected Landscape (MMPL) around their villages in 2009. The park covers more than 120,000 hectares (almost 300,000 acres), and is jointly managed by a protected area management board composed of representatives from local and national government, NGOs (including Conservation International), religious groups and the indigenous community.

The indigenous people living in the MMPL are allowed to pursue traditional lifestyles and economic activities in designated zones covering 20% of the protected area. Under the MMPL’s management plan, the rest of the forest is strictly protected — but even on a largely rural island like Palawan, threats to intact ecosystems are never far off.

Palm oil production is exploding across the Philippines, razing native forest and replacing it with endless grids of evenly spaced oil palms. Mining companies are also intent on digging for nickel in the areas surrounding the MMPL, a prospect that is causing tension among locals. Some communities embrace the idea and the influx of income it could bring to their villages. Others, like Siyang’s, are resisting.

To deflect these threats on the fringes of their traditional lands, residents of Raang and other communities rose up to defend their rights.

After her husband’s stroke, Siyang took over his role in the indigenous people’s organization, which meets regularly to manage community affairs. And when the protected area management board held a training for forest rangers in 2014, she signed up — as did her 31-year-old daughter Precy Lombe, herself a mother of four.

While government-employed rangers patrol most of the protected area, they don’t have the resources to manage the whole thing. That’s where Siyang and Lombe come in. 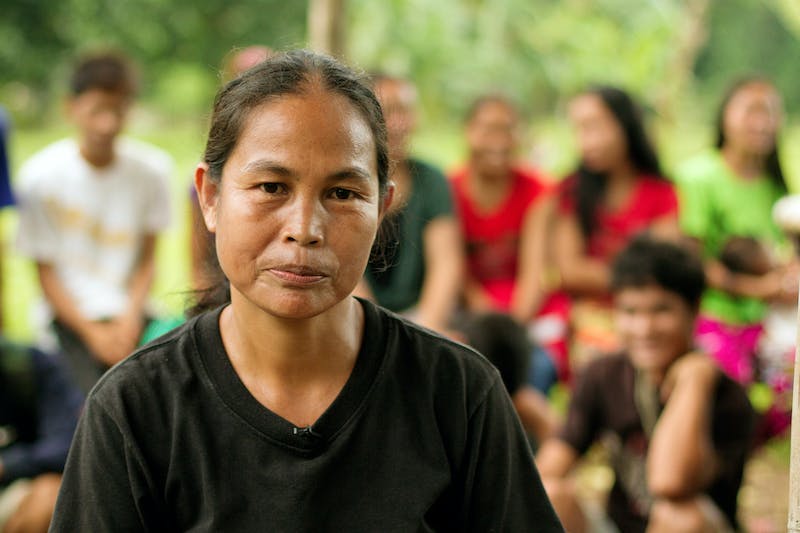 Nolsita Siyang, a forest ranger who regularly patrols the protected area surrounding her village on the island of Palawan, Philippines. (© Conservation International/photo by Tim Noviello)

The rangers are divided into three teams of less than 10 members each. For two out of every six weeks (except during the rainy months), each team patrols the protected area site, located a day’s walk from their village. While on duty, they walk transects through the MMPL, writing down observations about the people they encounter and the forest products they carry, as well as changing conditions within the landscape. They monitor sightings of rare species, such as the Palawan peacock pheasant in the community-designated wildlife sanctuary. They also help with the park’s upkeep by planting native trees in degraded areas. (Some of those plants can bring in income as well; for example, resin from almaciga trees is used to manufacture varnish and can be sold at market.)

Although rangers are given a small payment on days when they’re on duty, it’s usually a pretty thankless job — and sometimes a dangerous one.

“One challenge is conflict with community members who are supportive of mining,” Siyang said. “Another challenge is the weather. If it’s raining, it’s difficult to go up the mountain. It’s cold up there. There are also anti-government groups who are roaming around the forest who might hurt us.”

Among the 25 rangers trained so far in this area, only four are women.

“It is unusual for women here to become forest rangers,” said Jeanne Tabangay, who has been leading CI’s engagement with Palawan communities since 2002. “Nolsita, Precy and the other two female forest rangers are among the first brave ones to challenge themselves in this way.”

Tabangay recently conducted a study examining the interactions of gender and conservation in local communities. She found that most Palawan believe that men and women are treated equally within their society; however, their differing responsibilities often make it more difficult for women to participate in conservation activities.

Although women are free to attend meetings and participate in decision-making, their attendance depends on the agenda and location of the meetings. Meetings located far from their houses make it difficult for women to join, as there may be no one around to look after their children.

Some women solve this problem by bringing the whole family along.

“Whenever we have community meetings or workshops, Nolsita and Precy arrive as one family in a tricycle driven by one of the men,” Tabangay recalled. “Being married with children has not hindered these women from performing the tasks. Having supportive husbands has certainly made it easier for them.”

As in indigenous cultures around the globe, the Palawan are working to sustain traditional knowledge and ancient cultural practices in the face of escalating change all around them. Women like Siyang and Lombe are key players in this process, redefining what it means to be a Palawan woman while at the same time embracing much of their culture’s legacy — and shaping the future of their ancestral home.