On a Tiny Island, Searching for a Spitting Cobra

Editor’s Note: This is the first in a series of dispatches from David Emmett, senior vice president for CI’s Asia Pacific field division, as he sets out to the island of Atauro, Timor-Leste, in search of undiscovered species.

We wake early to catch the boat to Atauro, the island north of mainland Timor-Leste. Our goal? To conduct a species survey aimed at encouraging the Timorese government to designate the area as a ridge-to-reef protected area.

Atauro is a fascinating island. Approximately the same size as Washington, D.C., but with only about 10,000 people, it has steep slopes and virtually no fresh water. The only year-round water comes in a trickle from the forests on the upper slopes, which are shrouded in cloud much of the time, providing a minimal but essential supply for the island’s inhabitants.

The island has never been formally studied, but brief visits have shown that it likely contains undescribed species that are endemic, that is, found nowhere else on Earth.

It’s our team’s job to document the island’s plants and animals, and highlight the land’s value to people through freshwater provision and potential ecotourism. My personal ambition is to find the mysterious spitting cobra and monitor lizards that live on the island, which are rumored to be undescribed species. I’m also keen to find amphibians, as none have ever been found on Atauro!

The boat ride from the mainland is choppy and takes a few hours. As we near the island, I can see steep cliffs rising to forested peaks, the tallest of which is nearly 1,000 meters (3,280 feet) high.

On arrival, we disembark at the campsite, nicknamed “Barry’s Place,” and begin sorting out equipment: live-capture traps for mammals and reptiles, survey equipment for freshwater fish and a range of other gear.

As we look through the gear, I notice a monitor lizard nearby. It definitely looks different from any monitor lizard we’ve seen before. Unfortunately, it climbs out of sight before we can catch it.

We also see photos of a large snake that had been found in the kitchen a few days earlier. It turned out to be a banded sea snake! The snake’s venom is very deadly, yet the species is very gentle, with few if any human fatalities ever occurring. The snake was returned to the wild, but the photo enables us to document its presence. 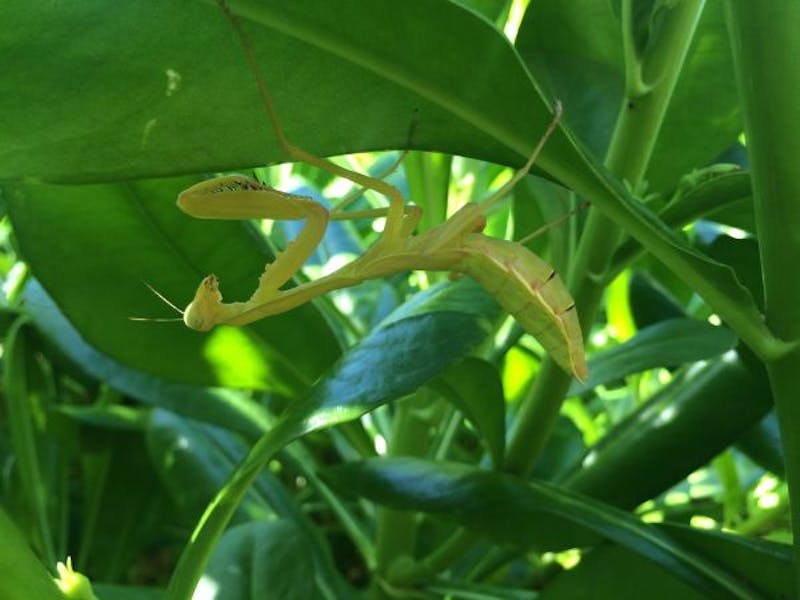 Spotted: a praying mantis on Atauro Island in Timor-Leste, on the first day of CI’s Rapid Assessment Program (RAP) survey of the island’s species. Most praying mantises live in the tropics; they are unique among insects in their ability to swivel their heads 180 degrees. (© Conservation International/photo by David Emmett)

In the afternoon, we drive up a dirt track into the mountains. Atauro has only a handful of roads, all dirt ones, and fewer than 50 vehicles in total. This road winds upward through grasslands covered in eucalyptus trees. Our botanist explains that eucalyptus trees are native to Australia and Timor. The ones on Atauro may also be an endemic species, which was very exciting.

As we reach 500-meter (1,640-foot) elevation, the steep valleys fill with rainforest. We stop to place some mammal traps in the damp leaf litter. I keep hoping to see a frog — which would be the first documented here ever! — but no luck yet.

The botanist does find a dead rodent in the rainforest at almost 800-meter (2,624-foot) elevation. After close inspection, we‘re unable to assign it to any known species. A good start!

We drive up to the peak of a ridge and watch the sun set over the ocean, with the islands of neighboring Indonesia in the distance. It’s a stunning view. Then the clouds roll in, the island peaks are covered in cloud, and we drive back to the coast.

The plan for tomorrow: Return to the mammal traps and see if we caught anything. Then drive to the end of the dirt road, where we’ll continue on foot into a large area of dense forest in search of rare species that could help us justify the island’s designation as a protected area. Stay tuned to see what we find!

David Emmett has spent much of his career conducting detailed biodiversity surveys of remote, unexplored places across Africa and Asia. See photos from his trip on CI’s Instagram page.

Cover image: Timor-Leste’s Atauro Island, where CI scientist David Emmett is currently part of a team conducting the island’s first biological survey. The goal of the survey — in addition to finding cool critters — is to encourage the Timorese government to designate the area as a ridge-to-reef protected area. (© Conservation International/photo by David Emmett)