In late 2011, CI’s Mark Erdmann blogged about an exciting expedition tagging whale sharks in Cenderawasih Bay off the northern coast of West Papua, Indonesia. The trip was conducted in collaboration with WWF-Indonesia, Hubbs-SeaWorld Research Institute and the Cenderawasih National Park Authority. Data received from the tags exposed the migratory behavior of these mysterious creatures along Indonesia’s coasts.

In Kaimana, on West Papua’s southern coast, the recent discovery of another whale shark population has triggered similar research, providing us with vital information backing the development of critical regulations to protect these species and support a burgeoning whale shark tourism industry that is both sustainable and benefits local communities.

Whale sharks are the largest living fish species, growing up to 18 meters (60 feet) and weighing 20 tons, yet they are known for being among the most gentle of the shark species. With enormous mouths that can be up to 1.5 meters (4.9 feet) wide, these filter feeders’ diet predominantly consists of plankton and small fish like anchovies.

Fishermen on Papua’s coast have long been aware of the existence of these animals. In fact, the sharks frequently approach the bagan (fishing platforms) where the fishers pull up nets of baitfish, hanging around for an easy meal or sometimes sucking fish from holes in the nets.

Many fishermen consider the sharks to be good luck. And with an influx of tourists pouring into communities to see the sharks’ feeding activity in person, protecting whale shark populations will be the smartest economic choice for these communities.

Whale shark tourism has been thriving in Cenderawasih Bay since 2010. Yet in Kaimana, the region’s tourism potential is only beginning to be realized.

Kaimana is located in West Papua’s Bird’s Head Seascape, recognized as the global epicenter of marine biodiversity. Since 2011, domestic and foreign tourists in Kaimana have increased, yet the region still lacks infrastructure that could make it a more accessible and popular destination.

While encouraging tourism, it’s also critical to protect the whale sharks from negative impacts resulting from human interaction. The more we know about the behavior of whale sharks, the better we can help local communities value and protect them.

Up to this point, our understanding of the life cycle of whale sharks remains limited. We know that whale sharks are normally solitary and frequently spend a fair proportion of their time in depths below 100 meters (328 feet).

We also know that they are able to migrate great distances to take advantage of seasonally abundant food sources, around which they tend to briefly gather in large numbers to feed before dispersing again). Most of the sharks observed in these aggregations are young males in the 4-8 meter (13-26 foot) size range — but we don’t know much else. This is why we are conducting this research in Kaimana.

Since December 2013, CI has photo identified 11, satellite tagged four and genetically sampled six whale sharks in Kaimana. The satellite tags record depth, temperature, and light level data (used to estimate location) of the shark’s diving behavior over a certain period of time. The time frame of deployment of these tags varies; some have been programmed to pop off the shark after three months, while other stay on for six.

Every whale shark has a unique spotting pattern on the body, similar to a human’s fingerprint. By taking photo IDs of each individual (the left side of the animal between the gills and the dorsal fin), we hope to learn whether any of the sharks observed in Kaimana are the same ones seen in Cenderawasih Bay.

From the 11 identified whale sharks, nine are adolescent males ranging from 5-8 meters (16-26 feet). The gender of the other two smaller sharks is unknown; we have yet to positively identify a female in this area. Our working hypothesis is that the aggregation of young males in these coastal waters is foraging on the abundant anchovies, but this does not explain the general lack of females!

One of the sharks we were able to satellite tag — a 5.5-meter (18-foot) male identified as Ka-Rt-0006 or “Abam” in our database — has provided us with interesting data. While whale sharks are considered deep-sea animals, this particular individual spent more than 70% of its time in shallow waters 40 meters (131 feet) or less. This is great news for the whale shark tourism industry, as this is within recreational diving depths.

With help from a colleague from the Large Pelagics Research Center at the University of Massachusetts Amherst, we also analyzed light level data to track where this shark swam. We found that it did not leave the waters of Kaimana, indicating that Kaimana’s Bicari Strait plays a significant role in the life cycle of local whale sharks. (Click on the map below to see the movements of this shark over a three-month period.) 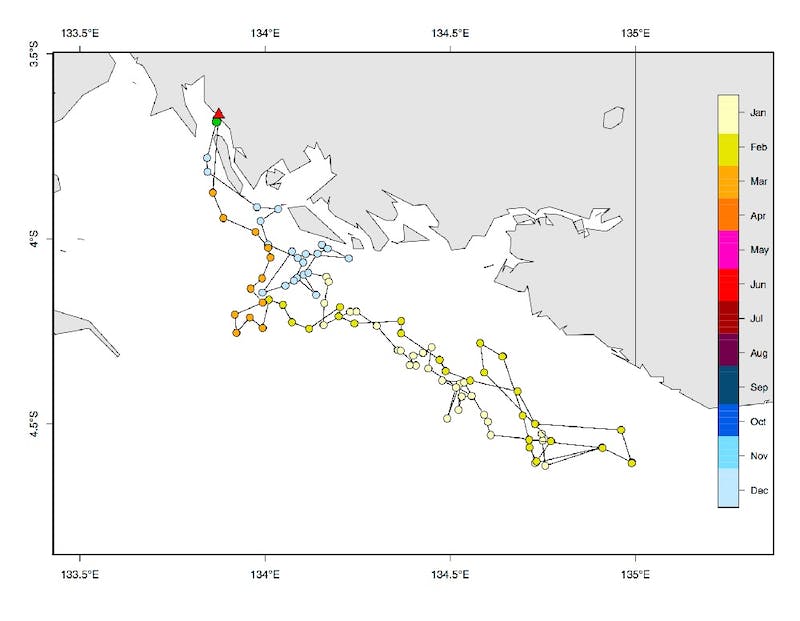 A three-month satellite tag on a male whale shark identified as Ka-Rt-0006 or “Abam” tracked its movements off the coast of Kaimana, Indonesia. (map © Conservation International)

The broader literature suggests that this species typically migrates considerable distances. The constant presence of whale sharks at Kaimana throughout the year however (as shown both by this 3-month tag data and observations from fishermen), presents great opportunities for developing sustainable marine tourism that can operate year-round.

CI is using this information to assist the government in the creation of a marine tourism strategy for Kaimana. Non-extractive uses of marine resources such as tourism can help generate revenue long into the future. We have also developed a whale shark tourism “code of conduct” for Kaimana — a set of guidelines for human-whale shark interactions to regulate any activities involving this species.

Three governmental agencies in Kaimana Regency now support this code of conduct, and we hope it will soon be officially implemented as a regency law.

To ensure the future of these animals in Indonesia, a few things are necessary:

The government of Indonesia understands the value of its marine resources and the potential for sustainable marine tourism. Last year, the governor of Raja Ampat declared the 4.5 million hectares (almost 10 million acres) of its regency’s waters as Indonesia’s first shark and manta sanctuary. As sharks are being relentlessly hunted for their fins across the nation, this marks a groundbreaking step in marine conservation for Indonesia. Hopefully the archipelago’s other regencies will follow suit, allowing populations of these threatened species to recover.

In the meantime, as global momentum for shark protection continues to build, we will continue our efforts to better understand the lives of these gentle and mysterious creatures.

Nita Yohana is the Kaimana communications officer for CI-Indonesia.