I’ve just returned from two weeks in Suriname, mostly spent meeting with leaders of Trio and Wayana indigenous communities in the country’s interior — a fabulous, road-less wilderness inhabited only by about 3,000 people.

Why was I there? Because once again, the people in this country little-known outside South America have just set another incredible conservation precedent that deserves to be celebrated and emulated. Thanks to work by CI in close collaboration with WWF and the Amazon Conservation Team, these indigenous groups have now declared an indigenous Southern Suriname Conservation Corridor (SSCC) covering 7.2 million hectares (17.8 million acres).

The SSCC is part of a new global order of establishing indigenous and community-owned conservation areas in which indigenous people are recognizing their rights and claiming their traditional lands to prevent them from being destroyed by industrial agriculture, logging and mining activities that have led to so much rainforest loss over the past half-century and have provided very few benefits to indigenous people.

Over the years, Suriname has shown amazing leadership in conservation. Its long-standing sense of stewardship has been partially shaped by three factors. 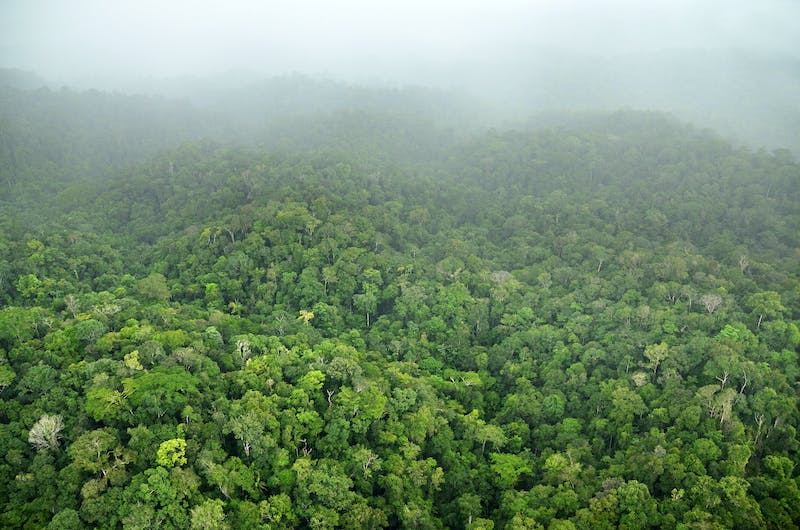 The mountains and forests of southeastern Suriname. The country retains over 94% of its original rainforest cover, by far the highest percentage in the world. (© Trond Larsen)

This small country, in northern South America retains over 94% of its original rainforest cover, by far the highest percentage in the world. Whereas most tropical forest countries have lost 90% or more of their original vegetation, Suriname has kept most of its Amazonian forests intact and pristine. This is a highly laudable feat, and the country will take on increasing value globally as other areas of the world liquidate their tropical forest resources.

Once a thriving plantation colony in the 17th and 18th centuries and a major source of bauxite for the American war effort in the 1940s, Suriname, since then, has been largely forgotten by the rest of the world. Few know that Suriname was actually traded for New York in the 1667 Treaty of Breda, with the Dutch getting Suriname and the British New York.

The two former colonies have followed very different paths since that time. Suriname’s low human population density — only about 530,000 people in an area roughly the size of New England — gives it the highest level of forest per capita in the world at an astounding 30 hectares (73 acres) per person.

Although its forests are part of the much larger Amazonian region, its rivers — including some of the cleanest and least disturbed on Earth — run north into the Atlantic instead of south into the mighty Amazon River. This gives Suriname a great competitive advantage in the Caribbean region, where many island nations are suffering severe water shortages.

The business of selling water from Suriname to these countries is already being pursued, and this new market may provide benefits to both Suriname and its Caribbean neighbors, including giving Suriname another economic reason to preserve its forests. 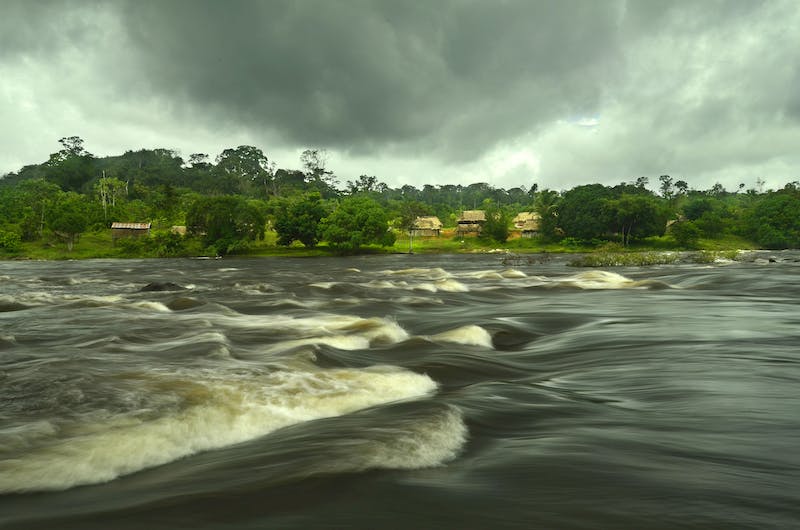 Water is a precious resource in Suriname, providing many of the goods and services people throughout the country depend upon. (© Trond Larsen)

The country’s cultural mix is truly unique, with indigenous peoples sharing the land with Javanese (brought 150 years ago from Java by the Dutch), Indians from India (who came in the late 19th century to work the plantations), a small population of Chinese merchants, one of the oldest Jewish communities in the New World, and a large population of Creoles of African and mixed descent. Perhaps the most unusual are the so-called Maroons, or Businenge as they call themselves — six tribes of West African origin representing the last runaway slave cultures in the diaspora, still intact in the central and western parts of the country.

Because they coexist remarkably well, these different groups of people have not made the same mistakes that have plagued most other tropical countries.

A Brief History of Conservation in Suriname

The country’s protected area network was created in the 1950s under Dutch rule and maintained by subsequent governments after Suriname gained its independence in 1975. When I first went there 40 years ago, these protected areas were already being visited by international tourists, well before this kind of activity caught on in countries like Costa Rica, Belize and Peru. 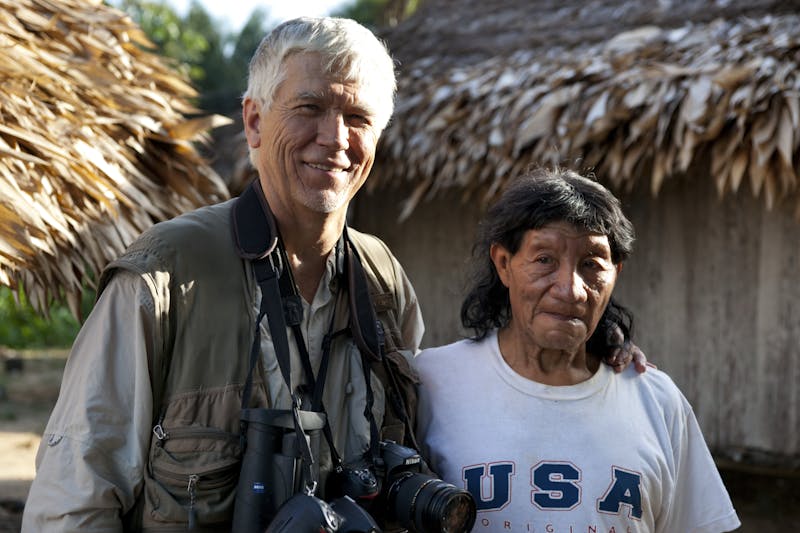 Thanks to an initial donation of US$ 1 million by the Harbers family of Seattle and a subsequent commitment by the Global Environment Facility, a $15 million trust fund was put in place by 2000 to ensure the area’s long-term viability. This endowment just celebrated its 15th anniversary and has increased its capital to $17 million and has supported a wide variety of projects over the years.

What’s more, the success of the Central Suriname Nature Reserve effort also led CI to create the Global Conservation Fund, following the Suriname model of establishing a new protected area and endowing it with a trust fund. This fund began operation in 2001, thanks to a generous gift of $100 million from the Gordon and Betty Moore Foundation. Since then, it has worked with NGOs, governments, the private sector and local communities to create 78 new protected areas in 27 countries.

The newly-declared SSCC is adjacent to the Central Suriname Nature Reserve; together they cover an area of 8.8 million hectares (21.7 million acres). This is an area as large as Austria — or more than four times the size of New Jersey — with only 3,000 people in it!

The reserve runs along the Brazilian, French Guianese and Guyanese borders and is largely contiguous with protected areas in those countries — protected areas that, incidentally, were created following in the footsteps of the Central Suriname Nature Reserve. What’s more, if you add the size of the corridor together with the Tumucumaque indigenous territory across the border in Brazil, the combined trans-frontier indigenous land for the Trio and Wayana people covers more than 11 million hectares (27 million acres). This is comparable in size to the Kayapó indigenous territory in southern Brazil, previously the largest tropical rainforest indigenous territory in the world.

So where do we go from here? Needless to say, this new indigenous corridor provides great economic benefits to Suriname and to the indigenous people themselves. CI and partners are already providing them jobs as rangers and monitors of this land, as well as empowering them to expand their authority over land and community decisions. CI also plans to work together with these communities in order to increase tourism.

This land protects almost all the watersheds of Suriname’s major rivers, opening the door to the previously-mentioned water markets. On top of that, this vast area of forest has enormous potential for REDD+ and could provide major income for the country as markets for forest carbon develop in the near future. Last but not least, these forests provide a safe haven for the rich fauna and flora of this part of Amazonia, protecting species like spider monkeys, giant otters, harpy eagles, jaguars and many other flagship species that are rapidly disappearing in other areas. 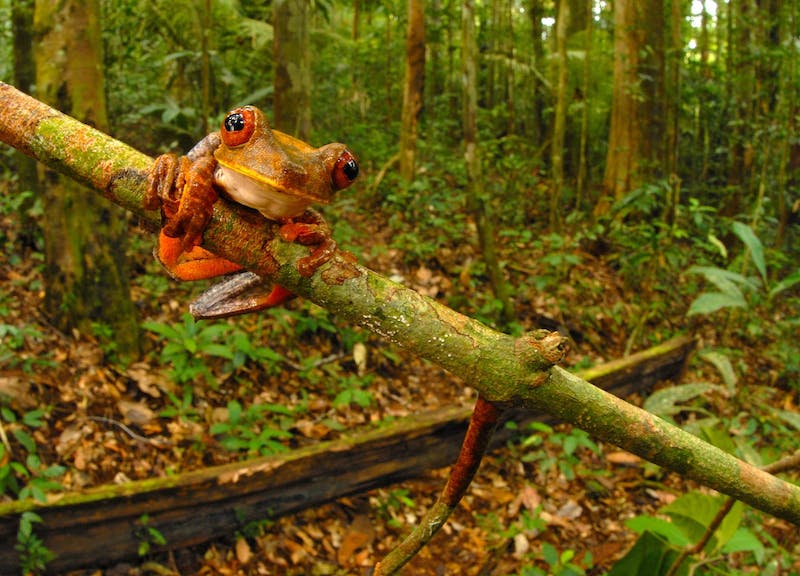 A tree frog clings to a branch in southern Suriname. (© Trond Larsen)

In addition, Suriname is now considering protecting most or all of its coastal zone, which contains some of the most intact mangrove systems, tidal mudflats, sea turtle nesting beaches and wintering sites for North American migratory birds in the world.

Indeed, Suriname is really outdoing itself, setting new precedents and solidifying its role as a global conservation leader. Witnessing the devotion to conservation and sense of ownership of the indigenous leaders was truly inspiring. With so much destruction and tragedy in today’s world, the country gives me a renewed sense of optimism and hope for the future of the planet. If Suriname can get it right, why can’t everyone else?

Russ Mittermeier was president of Conservation International for 26 years and is now executive vice-chair. He has been working in Suriname for 40 years.

Cover image: Indigenous community members wearing traditional dress in Suriname. The newly declared Southern Suriname Conservation Corridor is part of a new global order of establishing indigenous and community-owned conservation areas in which indigenous people are recognizing their rights and claiming their traditional lands to prevent them from being destroyed. (© Cristina Mittermeier)