My ‘aha!’ moment: Fishers are not the enemies of healthy oceans

Editor’s note: In honor of Conservation International’s (CI) 30th anniversary, this is the latest post in an occasional series called “My ‘aha!’ moment.” CI staff reflect on moments of insight or discovery that paved the way for their careers in conservation. For Mauricio Castrejón, fisheries manager for CI’s Americas field division marine program and a Lui-Walton Fellow, his ‘aha!’ moment was sparked when the 2007 financial crisis hit the Galápagos Islands — and presented unexpected opportunities for change. 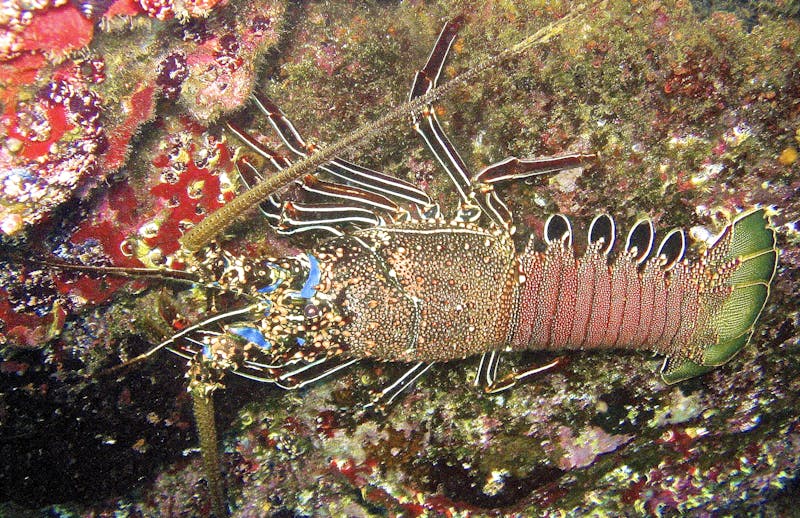 Spiny lobster in the Galápagos Islands. (© photo by Les Williams/Flickr)

For most people, the Galápagos Islands call to mind images of Charles Darwin’s famous finches and his theory of evolution by natural selection (or maybe the famous giant turtles!). However, few people know that commercial exploration — and ultimately exploitation — of the islands’ marine resources started at the end of the 18th century, well before Darwin’s book made the islands world-famous. Nearly 50 years before his expedition across the archipelago in 1835, whalers and sealers were already there, and fishing has played a key role in the history and health of marine ecosystems in the Galápagos ever since.

Today, about 30,000 people reside on just 3 percent of this volcanic archipelago’s land area, as the rest is protected area. For roughly 400 artisanal fishers, the spiny lobster fishery is their main source of income. Since 1960, when the commercial exploitation of spiny lobsters in Galápagos began, more than 95 percent of the lobsters caught were shipped to mainland Ecuador as lobster tails and then distributed to markets in the United States and Europe.

Crisis: An opportunity for change

A small group of fishers realized they could get higher profits by selling whole fresh and live lobsters at the local level, rather than selling lobster tails to middlemen. This trend represented an opportunity to develop a Community-based Fishery Improvement Project (C-FIP) in collaboration with CI-Ecuador team, local fishers and management authorities, and World Wildlife Fund. A C-FIP is a collaborative effort to help over-exploited or collapsed fisheries become ecologically sustainable, economically profitable and socially fair and equitable.

CI and partners offered technical, scientific and economic assistance to help fishers and the local communities. As fishers began to export less lobster to mainland Ecuador, they fetched higher prices by selling lobsters directly to local restaurants, hotels, tourist cruises and residents. After the global financial crisis, only 52 percent of total catches were exported, and the rest was eaten locally as whole lobsters. These whole lobsters earned an average price of US$ 12.24 in 2013, a significant increase over the US$ 4.80 price for a single lobster tail at the same time. According to some studies, fishers will continue to see even more benefits — as much as a 30 percent increase in revenue, or a US$ 400,000 jump overall — as they sell higher numbers of whole live or frozen lobsters.

The financial crisis had another unintended consequence: the recovery of spiny lobster stocks.

Before the crisis, exponential growth in the number of fishing license holders and vessels, generated by the boom and bust of the sea cucumber fishery, contributed to the exploitation of spiny lobster stocks in the mid-2000s. However, two years after the official end of the recession, lobster stocks showed clear signs of recovery, thanks to substantial reduction in the amount of fishing, together with the combined effect of market forces and favorable environmental conditions.

The successful implementation of a C-FIP for the Galápagos spiny lobster fishery has encouraged CI to extent its application into other geographies, including Panama, Costa Rica, Colombia, mainland Ecuador and Suriname. Our intention is that this coastal fishery recovery model contributes to ensure the socioeconomic wellbeing of coastal fishing communities and, ultimately, the conservation of the most important marine biodiversity areas of the world.

I was already midway through my 13 years of working to improve fishery sustainability in the Galápagos and throughout Latin America when I had my “aha!” moment. What I came to realize is that fishers are not the enemies of sustainability or ocean health, but rather the best allies that humankind can have to ensure the conservation of marine ecosystems, food security and poverty eradication around the world. We just need to understand their motivations, needs and concerns in order to help them create the conditions to move fisheries toward sustainability, while not forgetting that crises represent the best opportunities for change.