Mud, parrots and parasites: Filming the rainforest in virtual reality 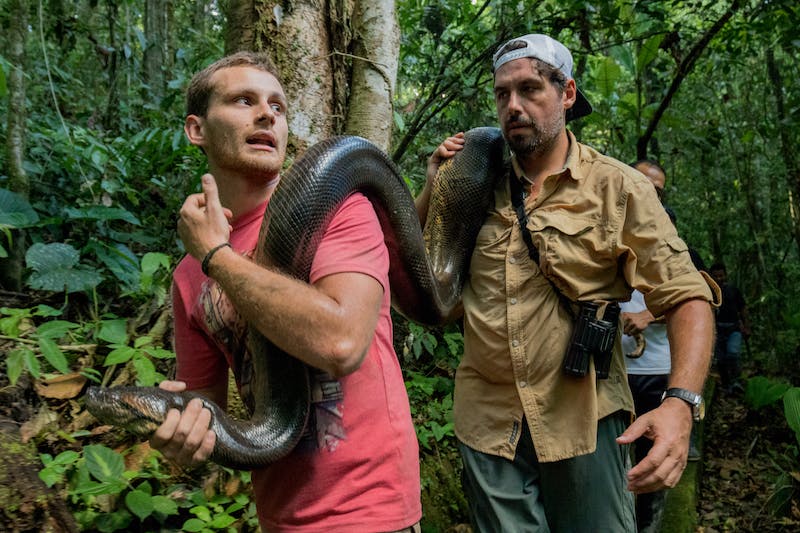 Editor’s note: This post has been updated in honor of International Sloth Day on Friday, October 20. Check out this video of a sloth filmed by our virtual reality team in the Amazon rainforest.

As part of the film crew for “Under the Canopy,” Conservation International’s (CI) second virtual reality experience, last September I joined fellow CI staff and a team from co-producers Jaunt VR on a 26-day expedition to two of the most pristine areas of Amazonia: southern Suriname and Ecuador’s Yasuní National Park.

In years of traveling around the world, it has become a tradition for me to come up with a list of my “top five” and “bottom five” moments of each trip — the experiences that stay with me long after I’ve returned home. Here are my most memorable moments from this Amazonia expedition — starting with the worst.

We spent two weeks filming in the Trio indigenous community of Kwamalasamutu in southern Suriname, a village so remote it is only accessible by chartered aircraft. When the rains arrived near the end of our expedition, they turned the village airstrip into mud, preventing any planes from landing. We feared getting stuck in the village, using up all our food, water and fuel supplies and being forced to delay the Ecuador portion of our shoot. Thankfully the rains ceased, and we were only three days behind schedule. (Below is the Kwamala airstrip on a sunnier day.)

Botflies are nasty insects which deposit their eggs under the skin of mammals (including humans), where larvae incubate until they eventually hatch and fly out. Unfortunately for me, one of these critters used my left arm as a host while we were filming in Suriname. Over the next two weeks, the spot slowly swelled to the size of a golf ball, causing me severe pain by the time we got to Ecuador. A local Waorani chef and three primatology researchers at the Tiputini Biodiversity Station helped me remove this parasite. How? Let’s just say it involved tweezers, rubbing alcohol and a lot of petroleum jelly. Afterward, the larva, baptized “Wini” after Suriname’s Sipaliwini River, was placed in a specimen container to be preserved in perpetuity as a memento. 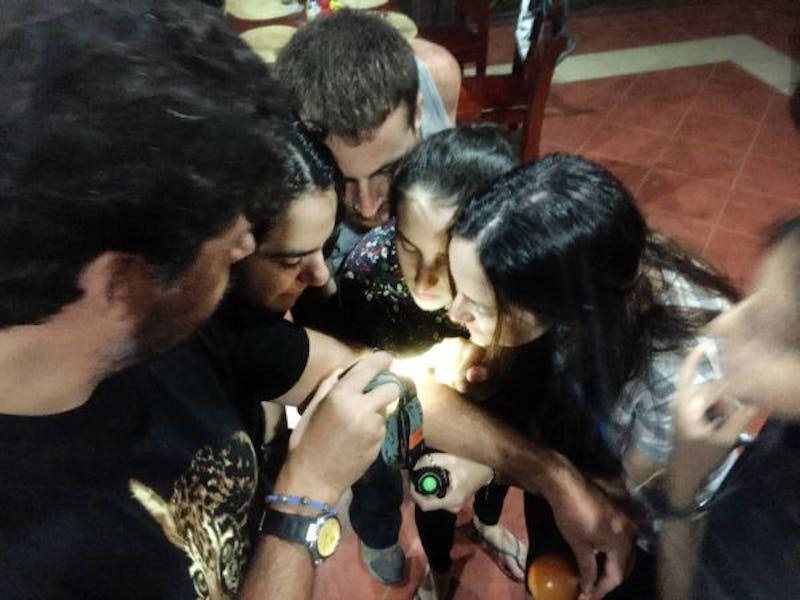 More rain, this time in Ecuador, caused our half-hour flight from Quito to the Amazonian town of Coca, from where we would travel to Yasuní National Park to film wildlife, to be cancelled. Instead we had to load our 30+ bags and cases of equipment into a small bus to travel down the twisting roads of the Andes Mountains. Six hours into the drive, a major roadblock almost became catastrophic as our bus stopped just feet away from a major mudslide oozing across the small road. This forced us to take an alternate route which added three hours to an already exhausting and dizzying journey.

When we arrived in Kwamalasamutu, it took a bit for some members of our crew to get used to the extreme heat and humidity, lack of electricity, occasional mosquitoes and long days of trekking across one of the most impenetrable rainforests on Earth. But there was another disruption that was less predictable.

Remote villages in Amazonia don’t have newspapers, television or the Internet. In Kwamala, the Trio people rely on daily loudspeaker announcements from the granman, or paramount chief, in order to get news from the village — who is selling fish, who needs a replacement part for a boat engine, etc. We had no idea about these announcements, much less when they would take place. Sleep deprived and adjusting to sleeping cocooned in hammocks, the crew was awakened every morning at 3 a.m. — when the Trio day begins — by the granman’s hour-long announcements in the Trio language blaring over the loudspeakers.

The Guianan cock-of-the-rock is one of the flagship bird species of the Guianas region — and our crew wanted to film it in virtual reality. To do this, I joined our second VR camera operator and a local Kwinti guide on a trek into the heart of the Central Suriname Nature Reserve. For about three hours, we struggled to find our way while carrying 50 pounds [23 kilograms] of gear each on our backs and being chased by a swarm of insects. At first, the buzzing sound of their wings convinced us they were either bees or wasps, which could have been deadly, but when we felt the excruciatingly painful sting from their bites, we knew they were horseflies. No matter how many we killed, or how much repellent we sprayed, 10 more would appear, attracted to our sweat. Nothing short of killing them one by one by hand kept them away. It was torture.

As you can see, getting to, traveling across and surviving this tropical forest ecosystem is no easy task, yet for those fortunate enough to explore the magic of Amazonia, it is a truly humbling experience. Here are some of the moments that made it all worth it.

After an hour-and-a-half boat ride down the Sipaliwini River from Kwamala and a 45-minute sweaty hike through thick forest, we arrived at the famous caves of Werephai. They shelter a wonderful collection of 4,000 year-old petroglyphs, rock carvings that tell the story of those who lived there then. Kamanja Panashekung, the hero of “Under the Canopy,” discovered the caves in 2000 while searching for his lost dog while the two were hunting in the forest (he eventually found his dog as well). Scientists from the Smithsonian have since documented the petroglyphs. The caves and these historic markings provided a beautiful backdrop in our film, illustrating the ancient connection between this forest and the people who still reside there.

Ecuador’s Yasuní National Park is among the most megadiverse places on Earth; a single hectare there contains more tree species than can be found in all of the United States and Canada. It’s also a spectacular place to film wildlife.

One of our stops: an easily accessible clay lick at Napo Wildlife Center where dozens, sometimes even hundreds, of parrots descend from the canopy to feed on the salty minerals on the forest floor. The minerals help birds and other animals digest certain plants by neutralizing their toxins.

We had two days to film the parrots. That first morning, after a 4:30 a.m. crew call, a long boat ride and a three-mile trek through the forest, we set up the VR camera at the lick. We tried our best to be extremely quiet, because any noise or movement could scare the birds away. We waited in the blind for hours until a group of cobalt-winged parakeets began to arrive, but the presence of a bicolored hawk spooked the birds, causing them to fly like fighter jets into our blind. Unfortunately, this happened right as we were grabbing a snack, so we missed the shot. The next day we tried again, praying that nothing would spook the birds. It was our only shot in getting this wildlife spectacle in VR. Luckily, this time no hawks appeared, and the birds gorged themselves on the clay as the camera rolled.

Two of the most difficult-to-shoot scenes in “Under the Canopy” are the opening tree descent and ascent shots, which required rigging the VR camera on ropes up a 200-foot [61 meter] tree. Finding the right tree, which needed to rise above the canopy and have limited vegetation around it so the camera could travel up and down unimpeded, required days of trekking and scouting the forest. This was a job for our rope access specialist team, an Irish couple named Tim and Pam Fogg. The Foggs, who have worked on numerous BBC nature documentaries, are the number-one climbing and rigging team out there. Their attention to detail and relentless, cheerful work ethic was admirable and inspiring — especially given their encounters with wasps, bees, thorns and rainstorms while rigging the tree. This is why the crew called them the “Fogg Machine.”

From tracking animals to collecting medicinal plants that cure diseases, the traditional knowledge of indigenous peoples is simply phenomenal. In southern Suriname, some of the Trio people from Kwamala helped us navigate through the forest, where carrying heavy cases with equipment is no easy task. Our guides quickly built a backpack out of palm fronds, without any rope or artificial materials, so we could easily carry these heavy cases. Another day, we needed a ladder to tie a rope to a tree for a camera rig. This time, they built a ladder out of fallen branches, comparable to if not better than anything one could buy at a hardware store. 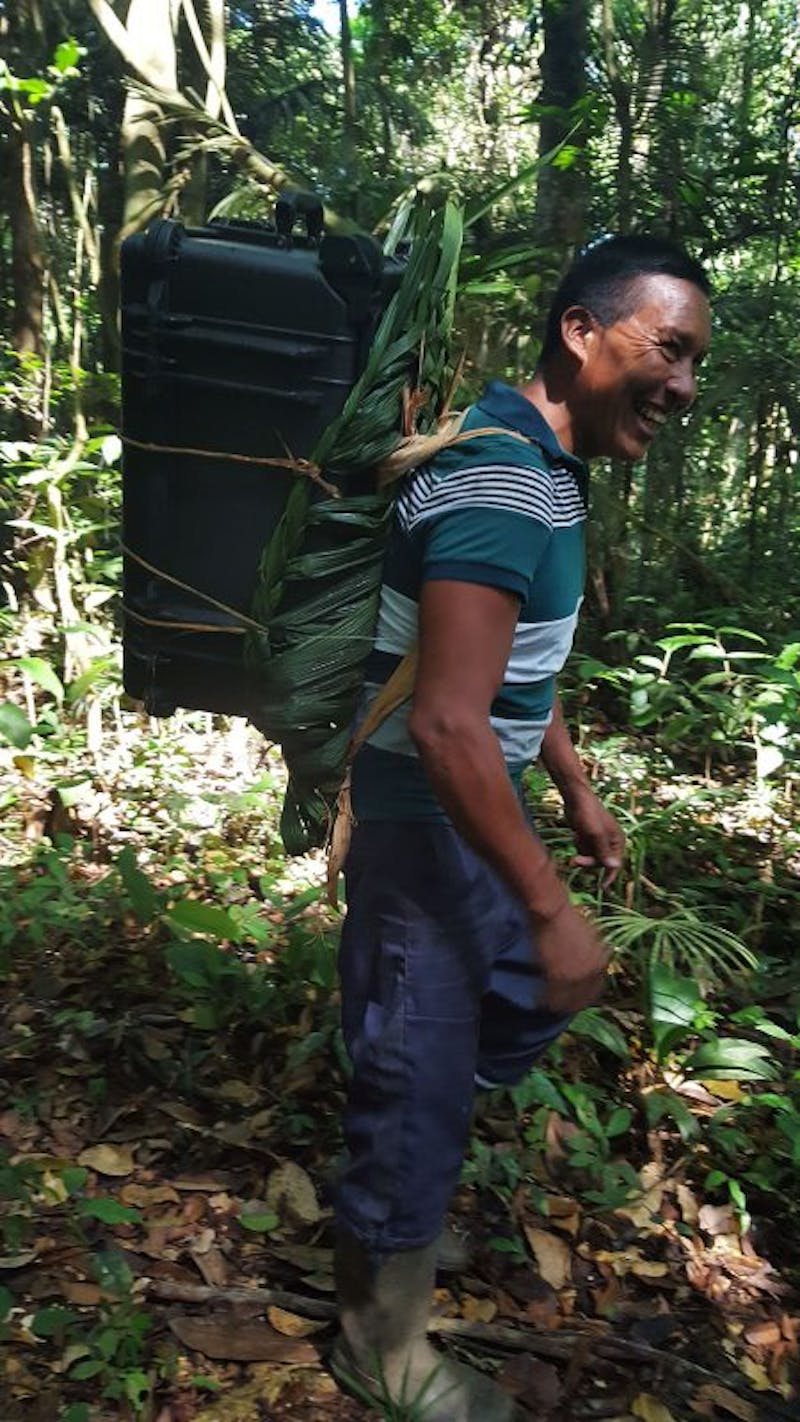 As mentioned above, our arrival in Ecuador was delayed by bad weather which canceled our flight. Instead, we had to take a nine-hour bus ride down the Andes Mountains into the Amazon basin. After a half-hour power boat ride on the massive Napo River, a tributary to the Amazon, we paddled canoes down a smaller river for about two hours before arriving at the lodge at 2 a.m. It was simply magical to navigate a river in Amazonia at one in the morning, on the type of boat that has traversed these waters for generations, under the silhouette of the forest canopy.

For more behind-the-scenes stories from the filming of “Under the Canopy,” check out the video below. Watch the full film here.

John Martin is the director of CI’s visual storytelling team.