On the seventh floor of a conference center in Cambridge, Mass., last Friday, a group of scientists and engineers huddled around tables, tapping on their laptops and sketching on poster paper, barely looking up to take in the Boston skyline.

The term “hackathon” — an event in which a group of people collaborate on computer programming — usually evokes an image of college students coding into the early hours of the morning to prototype apps that make it easier to find a parking spot or coordinate a game of soccer. The Hackathon for Climate — the second one for Massachusetts Institute of Technology (MIT)’s Environmental Solutions Initiative but the first to include Conservation International (CI) — had a different feel.

“The day is about informed speculation towards solutions,” said John Fernández, director of the Environmental Solutions Initiative, as he introduced the Hackathon. The topics to be discussed ranged from reducing the environmental impacts of mining to shrinking the carbon footprint of digital data storage.

While Fernández spoke, the screen next to him projected an image of a Congolese man disappearing down a dark cobalt mine tunnel. Sixty percent of the world’s cobalt — used to make the lithium batteries in smartphones and computers — comes from the Democratic Republic of Congo, and much of it is mined in dismal safety conditions.

Similarly, the digital world has a bigger environmental footprint than many users might expect. While the virtual “cloud” may seem like an abstract place, it exists in real places on Earth, often on coal-powered servers. The devices we carry in our pockets have supply chains that stretch across the globe. The use of technology products causes significant environmental and social impacts — data centers alone contribute two percent of greenhouse gas emissions, as much as the aviation sector.

The Hackathon for Climate brought together CI scientists and MIT students, professors, staff and alumni to explore the often invisible connections between technology and the environment, and to think about ways that technology could be used to advance climate solutions rather than exacerbate the problem. Specifically, technology may hold significant untapped potential when it comes to proving the power of nature itself as a way to address climate change. For instance, technology could be used to more accurately measure the coastal protection benefits of mangroves.

The Hackathon kicked off a multi-year collaboration between MIT and CI that will advance big-data analysis, machine learning and artificial intelligence in the field of conservation. Though technology and the environment may not seem naturally linked, MIT’s Vice President of Research Maria Zuber said that, after just one meeting, the collaboration “seemed rather effortless.” 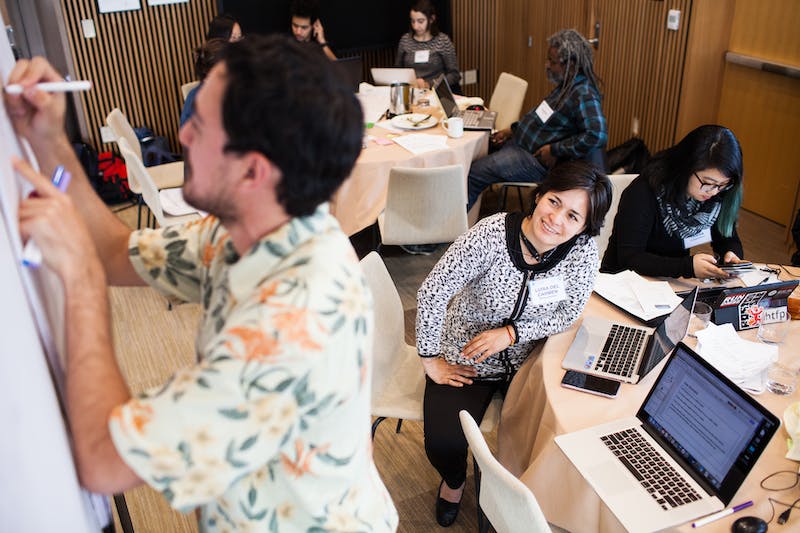 Participants in the MIT Hackathon for Climate. (© Jake Belcher)

“We know that MIT has experience in science and technology, but we don’t have experience in looking at natural solutions,” she said. “And Conservation International brought that to the table. It was the alignment of our respective strengths that gelled very quickly.”The Hackathon proved her point almost immediately: By the time the sun set over the Charles River, six teams had hacked out project ideas to use technology to reduce emissions, build resilience or both.

One team improved upon a design some members had already begun for an environmental impact label that would rate products according to emissions, global health and waste, and include a scannable QR code to link customers to product life-cycle information. Another team dreamed up climate agriculture lab cooperatives that would quickly extend climate-smart agriculture to the most at-risk farmers, at the same time creating a network that would feed local data into a global repository to identify the most sustainable farming techniques. Another group proposed using big data and psychometrics — essentially personality clues collected from social media posts — to create tailored ads that encourage public transportation over more fossil fuel-heavy alternatives.

These teams took home prizes for Most Potential for lmpact, Best Presentation and Most Creative Idea, respectively. But the real wins of the day were in the “aha” moments of collaboration. Rosimeiry Portela, a CI scientist who studies how to quantify the value of nature, and Julien Barber, an MIT Ph.D. candidate who studies fusion energy — two wildly divergent topics — joined a team that mapped out a personal sustainability tracker to help people set goals around carbon dioxide emissions and water use as easily as they might watch their calorie intake.

As Fernández observed, CI and MIT have one important thing in common: “We both measure our success in human terms.”

Allie Goldstein is a researcher in CI’s Moore Center for Science.

Cover image: By integrating the power of nature and technology, researchers can maximize their chances of solving problems such as climate change. For example, technological advancements could bring more accurate measurement of the coastal protection benefits of mangroves. (© Jeff Yonover)