When CI launched our Nature Is Speaking campaign last October, we challenged our supporters to use the hashtag #NatureIsSpeaking 1 million times on social media. Today, we’re excited to announce that we’ve officially reached — and exceeded — that goal, which means that computer giant HP will generously contribute US$ 1 million to CI. 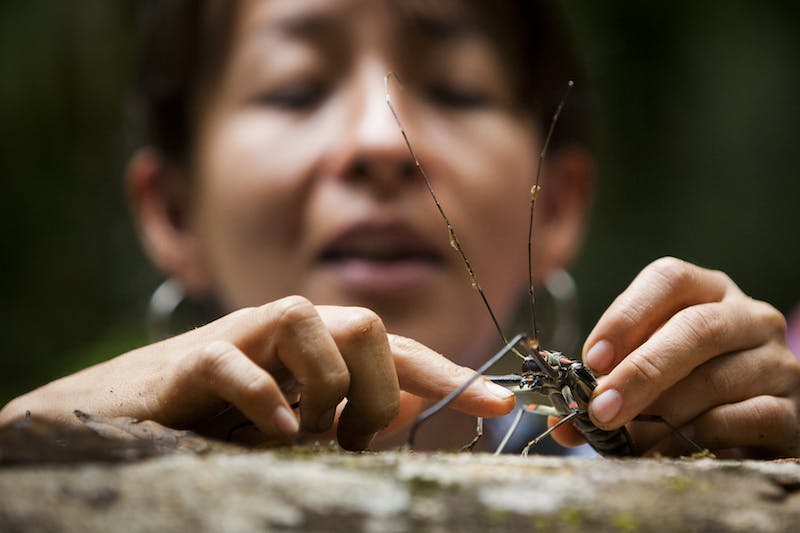 TEAM scientist Patricia Alvarez with harlequin beetle in the forests of Peru. In 17 sites across the world’s tropical forests, TEAM researchers are using standardized methods to collect data that, when taken together, provide a snapshot of which areas and species are the most in need of conservation action. (© Benjamin Drummond)

We will be using the bulk of this funding to support HP Earth Insights, our partnership that uses HP technology to aid the collection of rainforest data gathered by CI’s Tropical Ecology Assessment and Monitoring (TEAM) Network. From Costa Rica to Indonesia to Rwanda, TEAM researchers are learning more about ecosystem and species health in order to provide an early warning system for nature that can help guide conservation action.

In this Q&A with HP Vice President and Chief Progress Officer Gabi Zedlmayer, she explains how HP technology is enabling CI to listen — not just to tropical forests, but also to the social media conversation.

1.     How did the idea for HP Earth Insights come about?

The idea began about three years ago when we met with CI to discuss how we might use HP technology and expertise to support the biodiversity research being pursued by the organization.

What we learned from CI’s scientists is that their biggest challenge was collecting, managing and analyzing the biodiversity and climate data they were capturing at 16 sites across four continents. [Editor’s note: an additional site was added last year.] We recognized that we could apply our big data capabilities to build a first-of-its-kind early warning system that would support CI scientists in their efforts to better understand biodiversity loss across the world’s tropical forests.

2.     How has the partnership been able to help TEAM with wildlife monitoring and analysis?

For example, scientists can now analyze data nine times faster than before, and they can quickly identify species trends and indications of the related impacts that climate, people and land use have on species. In fact, what once took a team of scientists weeks, months or more to analyze can now be done by a single person in hours. This data analysis allows scientists, government officials and the wider public to see changes in ecology and biodiversity unfold in near real time — enabling them to proactively respond to environmental threats as they emerge.

3.     Why did HP want to become involved with CI’s Nature Is Speaking campaign?

We felt that the Nature Is Speaking campaign was a natural extension of the partnership we had developed with CI through the HP Earth Insights initiative. We were excited about the campaign because we believed it could really help bring awareness to the impacts humans are making on the environment — and drive a movement for action. It also gave us an opportunity to use technology to support another conservation-based project: the use of HP Explore technology to follow the spread of #NatureIsSpeaking and the online conversation.

Both this campaign and HP Earth Insights illustrate how all of us — consumers, corporations, nonprofits and governments — can work together and leverage the power of technology to protect our precious natural resources. It’s a prime example of HP Living Progress, our focus on creating a better future for everyone through our actions and innovations.

4.     Last year you visited the TEAM site in Costa Rica with CI’s Jorge Ahumada. What was the most memorable part of that trip for you?

I was so excited to be able to travel into a rainforest for the first time and see firsthand the actual work that the scientists are doing at the site. While there, we visited a vegetation plot — accompanied by spider monkeys and owl butterflies — and I learned how to measure lianas. I also learned how to set up a camera trap, a process that I now know requires a high level of attention and detail to get it right.

One area of focus for us is helping CI to scale up what we have begun through HP Earth Insights with national wildlife and parks agencies around the world. We’ve already seen an uptick in the interest that governmental agencies have in this solution, which can help them proactively identify and address environmental threats. For example, the National Protected Area Service of Peru (SERNANP) is now using data collected via HP Earth Insights to help measure protected area effectiveness and levels of biodiversity in Manu National Park.

Molly Bergen is the senior managing editor of Human Nature. Gabi Zedlmayer is HP’s vice president and chief progress officer. Read the next blog in this series to learn how camera-trap data can teach us more about how communities use the forest in the Colombian Amazon.

Cover image: Researcher Badru Mugerwa measures the diameter of a tree in a vegetation plot at a TEAM site in Uganda. (© Benjamin Drummond)