Meet a scientist: For mapmaker, magic in small discoveries 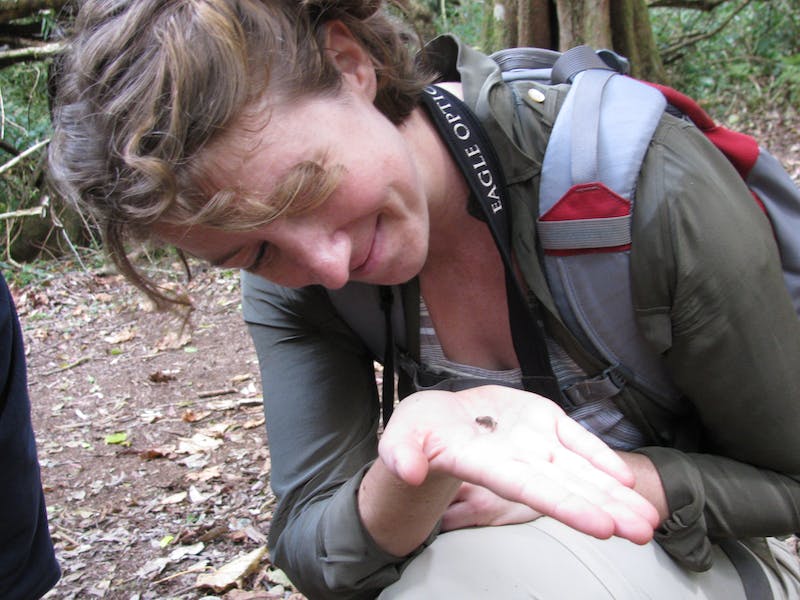 Rachel Neugarten with a stump-tailed chameleon, pictured above, in Montagne d’Ambre National Park in Madagascar. (© Conservation International/photo by Rachel Neugarten)

Editor’s note: A recent survey found that 81 percent of Americans could not name a living scientist. No, not a single one. At Conservation International (CI), we have lots of scientists you should know. Here’s one.

Rachel Neugarten is director for priority setting at Conservation International. In a world with endless conservation challenges and limited resources, Neugarten helps determine where to focus the organization’s efforts.

We spoke with her about her path — including a fateful encounter with a plastic bug.

Question: What are you working on these days?

Answer: I work broadly across Conservation International on identifying important places for biodiversity and natural capital — the nature that people need for human well-being, food, water, energy, etc. That means I make maps for priority areas for biodiversity,  forest carbon stocks, places where coastal mangroves protect vulnerable people from cyclones, and so on. I take spatial data — satellite imagery and any other sorts of mapping data, like you might see on Google Earth for example — and then bring it to the problem of conservation.

Q: So how does an organization take these datasets and say, Here’s what we’re going to do?

A: That’s a good question. We do that in two ways. One is, are we working in these places already? So, we overlay places that Conservation International is working with places that are global hotspots for biodiversity, priority places for forest carbon stocks, etc. And second, where should we be working?

An example is Critical Ecosystem Partnership Fund a joint initiative of which Conservation International is a member in Madagascar used the maps to protect wildlife. They had a five-year investment strategy in Madagascar. They had more than 200 sites and needed to decide and prioritize among them.

Q: How does your background inform your work?

A: I have always been really into nature from a young age. Once, my parents took me to the Natural History Museum in New York City, and I remember getting really excited when I found a bug in the leaf litter in one of the dioramas of a woolly mammoth or something — there was all this detail, and as a little kid, I thought that was pretty magical that there were all these little discoveries.

Q: What about the bug?

A: Whoever put that diorama together was so focused on the detail and making that kind of real experience for a viewer that they actually had bugs and birds and things hiding that were not the focus of the exhibit. That equivalent to being in nature and finding something unexpected is kind of magical.

For example, recently I was hiking in Virginia and we came across what looked to me like a centipede. It was bright red and yellow spots, black and long, and I thought, I have no idea what this thing is. So, I sent this picture to [Conservation International scientist] Trond Larsen, who’s an entomologist. He said it was a glow-worm larva. I didn’t know we had such a thing as glow-worms in Virginia. So, stuff like that — that was really interesting to me when I was younger, and still is. In high school I learned that there’s a term for this, called ecology, I got really excited and was like, that’s what I want to do.

Q: So where did you go from there?

A: I studied environmental science in college. In my senior year, I “cold-emailed” a bunch of nature conservation NGOs. The only person that wrote back was someone from The Nature Conservancy, a freshwater scientist named David Braun. I said I’d love an internship if he could use an intern. He ended up training me in freshwater ecology — which was really lucky because I would have stuffed envelopes if they wanted; I had no skills at that point as an undergrad. He got me trained and he found some funding for a short-term position over the summer, which ended up turning into a permanent position.

So, a combination of knowing what I wanted to study and lucking out and getting a scientist that was interested in me and finding me a job. I probably worked very hard and proved myself competent, but he hired me, and I ended up working for The Nature Conservancy for four years. And then I went back to school and got a master’s in natural resources at Cornell, looking at how conservation in the Adirondacks plays out. I got all different opinions from local communities, the logging industry, the conservation community, as well as people outside of the area that benefit from recreation and tourism. I interviewed a lot of people, and that was really useful in learning about the human dimension of conservation. And then I landed this great job at Conservation International.

Q: So much of the news around climate and conservation is gloom and doom. What keeps you going?

A: I think people respond to gloom and doom and environmental catastrophe in two ways. One is to get depressed and think “there’s nothing I can do.” The other, which was my reaction when I was an angsty teenager and I first learned about environmental issues, was that I decided that morally, this was the most ethical thing I could devote my life and my career to. So, that’s a very motivating force.

Traveling around Conservation International’s projects globally, you just see how dependent people are. You see photos in the news about poverty and dependence on nature, but then you actually go into the field, in these little fishing communities in Madagascar, and they’re completely living hand to mouth. They tell you that the reason the fish haven’t been doing well in the past couple of years is because it hasn’t rained — the fish depend on an influx of water for their habitat and their spawning cycle. The people know that it hasn’t rained in three years because of climate change. They actually told me that. They looked at the forest and they saw the trees gone and they said, “Oh, there used to be trees here and it used to rain and now there’s no trees and it stops raining.” In these extremely poor, extremely remote communities, they get it. That’s — to me — extremely motivating.

Q: What do you tell a young person who’s interested in this field?

A: Going the route that I did seems to be the most successful: trying to find a researcher, scientist, or a mentor figure that you think would be cool and just asking if you can help, asking what you can do for them. I hate to tell people to volunteer, but internships really seem to be how you get the foot in the door, you get training. I wish there were more paid volunteer opportunities for young people because financially I think a lot of young people can’t afford to just volunteer as I did while I was an undergrad. It did lead to a paid opportunity when I graduated, which helped.

Basic science classes give you hard technical skills. Stuff like Geographic Information Systems (GIS). You’re so employable if you have some GIS skills. Basic research methods and stats, if you are interested in research. It’s boring to take statistics classes but if you want to be a researcher, it’s critical.

And then volunteer and travel. I didn’t do the Peace Corps, but I put my own volunteer tour together, where I contacted NGOs in other countries and said if I came and I worked for you, would you cover my room and board? I was able to get field research experience in that way. International field research positions often don’t pay, so again, that’s not financially feasible for everyone, but if you’re lucky you can get at least your expenses covered.

And keep your sense of wonder. Whether it’s exploring the natural history museum or the woods behind your house, you’ll never know what you might find. That’s the magic of this job.