Madagascar’s sacred forests have a guardian — in space

For most people in Madagascar, fire is a way of life.

It is the primary source of light, heat and cooking; burning old grass to encourage new growth for cattle grazing is a traditional part of agriculture in the African island country.

But when conditions are dry and windy, these fires can get out of hand — and the results can be devastating. As climate change brings higher temperatures, and deforestation and habitat degradation increase landscapes’ susceptibility to burn, uncontrolled fire has never been a bigger threat.

What if there was a way to let farmers in Madagascar know when it’s too dangerous to start a fire?

Thanks to cutting-edge technology developed by Conservation International (CI), there is.

A fire alarm for the world’s forests

To help people in remote forests prevent fires from getting out of control, CI designed Firecast in 2013. A successor to its Fire Alert System, an automated early warning system developed in 2007, Firecast uses the latest web-mapping technology and satellite coverage.

Here’s how it works:

What’s more, Firecast doesn’t just monitor current fire destruction — it can also be used as a forecasting tool, using satellite-derived weather conditions to predict where fires are likely to break out or spread. Daily and seasonal forecasts provide valuable information to decision-makers to prevent the ignition and spread of fires during times of elevated risk.

For farmers and residents in Madagascar, an additional sensor may be especially useful. At an August 2015 workshop in Antananarivo, the capital, CI introduced high-resolution, satellite-derived, active fire alerts from VIIRS, a NOAA/NASA sensor that can detect fires when they’re significantly smaller, and with greater locational accuracy, than was previously available — and users in Madagascar can receive this information sooner, to help fight fires before they grow out of control.

Fires can have a detrimental effect on biodiversity. For example, Madagascar’s Baly Bay is home to the plowshare tortoise, one of the world’s most threatened tortoises, with only 2,000 individuals left in the wild. The species’ habitat is under serious threat from fires.

Sometimes, fires even encroach upon Madagascar’s sacred, protected baobab trees. A sign at Avenue of the Baobabs, a prominent group of baobab trees lining the dirt road between Morondava and Belon’i Tsiribihina in western Madagascar, explains that one of the major threats to baobabs outside of the protected area is agriculture-related fire occurring too close to the trees.

In August I traveled to Morondava to see the famous trees, a long day’s drive from the workshop. As we entered the central highlands, the charred and barren landscape was heartbreaking and seemed to stretch for hours. The driver became emotional describing what it was like to drive this route over the past 20 years and to see the forest gradually disappear to logging and fire. Burnt seedlings indicated that this practice was ongoing. 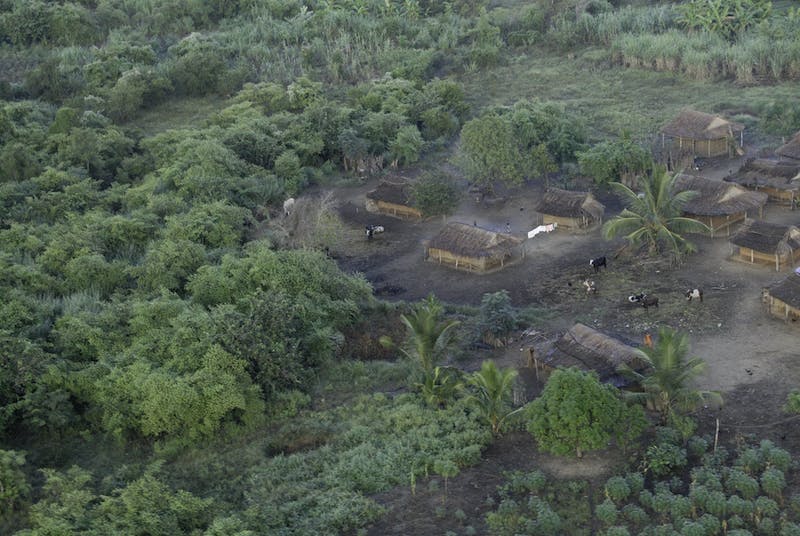 Sakalava village between Morondava and Baobab Alley (© Conservation International/photo by Russell A. Mittermeier)

From extinguishing fires to preventing them

We may never be able to completely prevent deforestation and habitat degradation from fire, resource extraction and agricultural expansion in remote areas, but thanks to Firecast, we are a step closer. Equipping Malagasy people — and others around the world — with a tool that enables them to be proactive about fire threats instead of just reacting to incidents will have long-lasting benefits, including prevented deforestation and avoided greenhouse-gas emissions.

Back at the workshop, representatives from the Missouri Botanical Garden showed a video made by a local Malagasy community about how they fought a recent fire that jumped a river in the windy conditions. This reminded me of a fire back home in California in July that jumped a freeway, but this community did not have the same tools to fight it — no protective gear, and only watering cans and branches. It was tragic to see what they lost in the fire, but I admired their determination to replant and rebuild.

Hopefully with new data from Firecast, they can prevent something like this from happening again.

Kellee Koenig is a cartographer and CI’s GIS manager.