Madagascar’s Lemurs: Thriving in Theaters, Disappearing in the Wild

Most of the world knows about Madagascar from the three DreamWorks films, the latest of which is setting records at the box office as we speak. But the real Madagascar, which I know from more than 80 visits over the course of the last 28 years, is a very different place.

In fact, it is even more special than its portrayal by DreamWorks, but it is also under the gun — really at risk of becoming like Haiti, a country with almost zero natural wealth left to support its people.

The real island of Madagascar is located nearly 400 kilometers (250 miles) off the east coast of Africa and is in many ways the highest priority biodiversity hotspot on Earth. Covering 600,000 square kilometers (nearly 231,000 square miles — roughly the size of Texas or France), it is the fourth-largest island in the world. It is the largest oceanic island, which means that unlike a continental island, it has been separated from the rest of the world for a very long time.

Its separation from the African mainland took place 160 million years ago and from India about 90 million years ago, meaning that most of the plant and animal species found on Madagascar evolved in long isolation and are found nowhere else.

Because of its geographic location in the tropics and subtropics and its unusual geological history and topography, it has very high levels of species diversity and extremely high endemism (species found nowhere else on the planet).

For example, it has about 15,000 to 16,000 plant species, 80 percent of which are endemic, a number comparable to all of North America north of Mexico — an area more than 30 times larger. It has more orchids than all of mainland Africa. Its reptile diversity is also comparable to that of North America north of Mexico, and its amphibian diversity, already very high, is likely to at least double in the next few years with the continuing discovery of species new to science.

Sadly, Madagascar is also one of the world’s most heavily impacted countries in terms of recent habitat destruction, and its globally unique species are sending us an urgent warning. Nearly 90 percent of its natural vegetation has already been lost, and erosion on the island is severe.

What is more, it has faced considerable political instability since a coup in March 2009, and the current government is not recognized by any other country, with most international aid donors having withdrawn their support for the environment and most other activities. This withdrawal includes USAID, which is now giving only humanitarian assistance.

In addition to political problems continuing to grow during the past three years, a recent upsurge in bushmeat hunting has impacted lemurs, tortoises and other species.

Among the lemurs being indiscriminately killed is the indri (Indri indri), the largest of the living lemurs. This spectacular species leaps from tree to tree like an arboreal kangaroo and looks like a cross between a teddy bear and a giant panda. Indeed, like the giant panda, it is a flagship species of incalculable value for Madagascar and must be fully protected.

Given this, the International Union for Conservation of Nature (IUCN) Species Survival Commission decided to carry out a reassessment of Madagascar’s lemur fauna.

To do this, the Primate Specialist Group of the Species Survival Commission, which I chair, and the Bristol Zoo in the U.K., convened a special workshop in Antananarivo, Madagascar, July 9-12, bringing together some 60 experts from Madagascar, the United States, Canada, Germany, Italy, France and the U.K.

We reviewed every species of lemur and came up with a new assessment that many of us found shocking and grim: By the end of the meeting, we were forced to “uplist” (i.e., give a higher conservation status) to nearly every species of lemur. Only two species were classified as Near Threatened, three as Least Concern and four as Data Deficient.

See for yourself: Here are the new numbers and a 2005 Global Mammal Assessment carried out by the IUCN/Species Survival Commission and Conservation International. 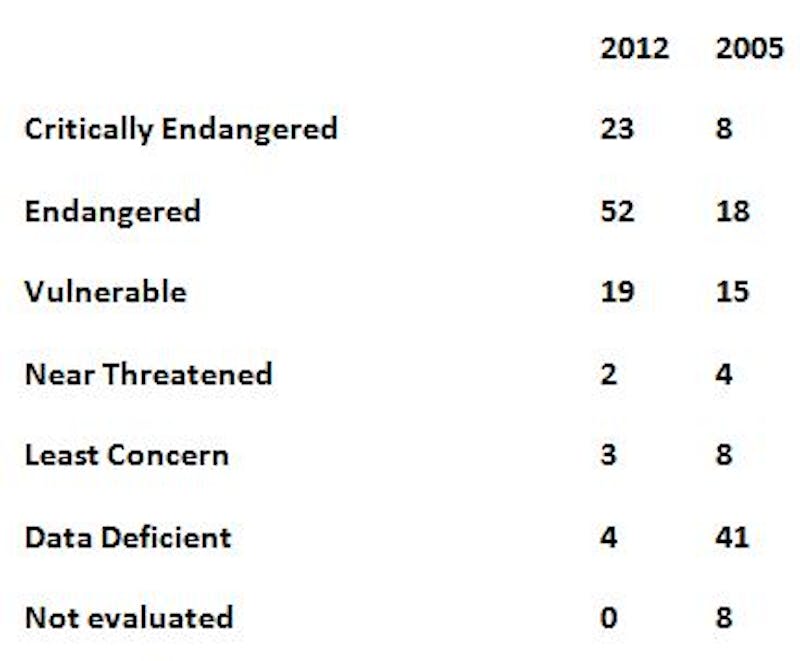 This increase represents an amazing 91 percent — or 94 out of 103 — of all known species falling into the three threatened categories, a dramatic increase and the highest percentage ever for a large group of mammals.

Among the most spectacular species recognized as Critically Endangered is the above-mentioned indri; the greater bamboo lemur, a bamboo specialist that is the world’s most endangered primate genus; Madame Berthe’s mouse lemur, at 30 grams the world’s smallest primate; and the blue-eyed black lemur, one of only two primates other than humans that has blue eyes.

The most endangered of all is the northern sportive lemur from extreme northern Madagascar, which is down to only 18 individuals left in the wild (with none in captivity), in the whole world.

This new assessment highlights the very high extinction risk faced by Madagascar’s unique lemur fauna, and it is indicative of the grave threats to Madagascar’s biodiversity as a whole. Madagascar’s unique and wonderful species are its greatest asset, its most distinctive brand, and the basis for a major tourism industry that continues to grow despite current political problems.

Science and experience both tell us that in order to maintain Madagascar’s lemur fauna and its biodiversity in general, it is essential to have a well-managed, representative network of parks and reserves.

But these reserves are important not just for Madagascar’s biodiversity; they are essential for the long-term well-being of its people. The vast majority of the ecosystem services benefiting Madagascar’s human population derive from these protected areas. These services include water from forested watersheds, pollination, maintenance of productive soils, fibers, building materials, plant foods from the forest and carbon sequestration.

Of particular note, these ecosystems and the biodiversity within them provide many sources of jobs and livelihoods, especially in terms of ecotourism and associated activities. Madagascar has only begun to scratch the surface of its enormous tourist potential, counting only about 250,000 visitors per year, compared to tiny nearby Mauritius which attracts more than a million international visitors a year.

More than 20 percent of all primate species on Earth live in Madagascar in an area that is well under 1 percent of the total global land area occupied by primates. Its primate diversity is exceeded only by Brazil, a country more than 15 times larger.

Madagascar’s species are 100 percent endemic, making the country’s lemurs, without doubt, the highest priority for primate conservation on Earth.

Even more remarkable is that, in light of the serious degradation that has been taking place, we still continue to discover species new to science, with more than 40 new species described since 2000. In fact, at the workshop last week, a new species of lemur — the 103rd taxon of lemur known to man — was announced to the group of specialists by scientists from the German Primate Center in Goettingen, Germany. It is clear — Madagascar still has many natural treasures we have yet to discover.

Indeed, on the heels of Rio+20, where I joined Conservation International’s delegation to highlight the importance of green economies as a new model for sustainable development that recognizes natural capital (biodiversity, ecosystem services) as central to successful long-term economic development, it is essential to look at lemurs not just as cute, wonderfully appealing creatures worthy of preservation in their own right or unique objects of scientific investigation — which of course they are.

But they should also be seen as engines of economic development, as a global brand and a true competitive advantage for Madagascar in the global arena. They should be seen as a powerful engine for job creation and poverty alleviation in one of the poorest countries in the world.

Fortunately, the models for this are already in place. Madagascar has some of the best village-based guide associations in the world. Many of these local communities have taken on the task of creating community reserves of their own to complement those run by the government.

But to make this happen, the country needs a functional, democratically-elected government, which it had before the coup. It also needs to ensure that the lemurs and its other wonderful species and critically important ecosystems do not disappear.

The lemurs offer us an important warning about the vital natural wealth we are squandering to the detriment of our well-being and that of future generations. Will we listen to these amazing animals after the movie credits end? I sincerely hope so.

Dr. Russell Mittermeier is the president of Conservation International. He is also an author, primatologist and chairman of the International Union for Conservation of Nature (IUCN)/Species Survival Commission Primate Specialist Group. The workshop he attended was sponsored by the Margot Marsh Biodiversity Foundation, the Mohamed bin Zayed Species Conservation Fund, Ambatovy Minerals S.A., Richard Branson’s Virgin Unite, Conservation International, and Bristol Zoo Gardens, and was held at the Carlton Hotel in Antananarivo, the capital of Madagascar.