It was a massive illegal operation, eating away at the world’s largest tropical forest — and it was hiding in plain sight.

In September, The Guardian reported spotting as many as 30 trucks carrying logged trees along three illegal logging roads in Peru’s eastern Amazonian region. The roads, each measuring up to 51 kilometers (32 miles) long, terminated at a dock on the Ucayali River, a major Amazon tributary.

“These images show us what we knew was happening, but could not see,” Julia Urrunaga, Peru director for the Environmental Investigation Agency, told The Guardian.

With the rise of remote sensing, illegal logging is detectable — but deforestation can take time to become visible to satellites, and recent reports suggest that loggers are devising new tactics to avoid detection from eyes in the sky.

What if there was a way to see illegal logging in real-time — and even detect the smell of the fire and the sound of the chainsaws used to fell the trees?

It’s not too far-fetched of an idea thanks to another new high-tech darling: drones. Officially known as “unmanned aerial vehicles,” drones are being used to perform a number of environmental tasks: There are drone rangers and drone firefighters, and by the end of 2015, there may be drones capable of planting up to 36,000 trees a day.

These flying robots could also help stop deforestation in the first place.

On patrol in a forest twice the size of NYC

About 400 kilometers (250 miles) to the northwest of the illegal roads in Ucayali, in the neighboring region of San Martín, Conservation International (CI) is helping to ramp up monitoring of Peru’s Alto Mayo Protected Forest (AMPF) — and drones might have an important role to play.

Despite its protected status since 1987, the AMPF experienced Peru’s second-highest deforestation rate in 2005, due to illegal logging; the conversion of forest to coffee plantations; an influx of people migrating from other regions; and unsustainable farming practices — all exacerbated by the lack of enforcement in the protected area. 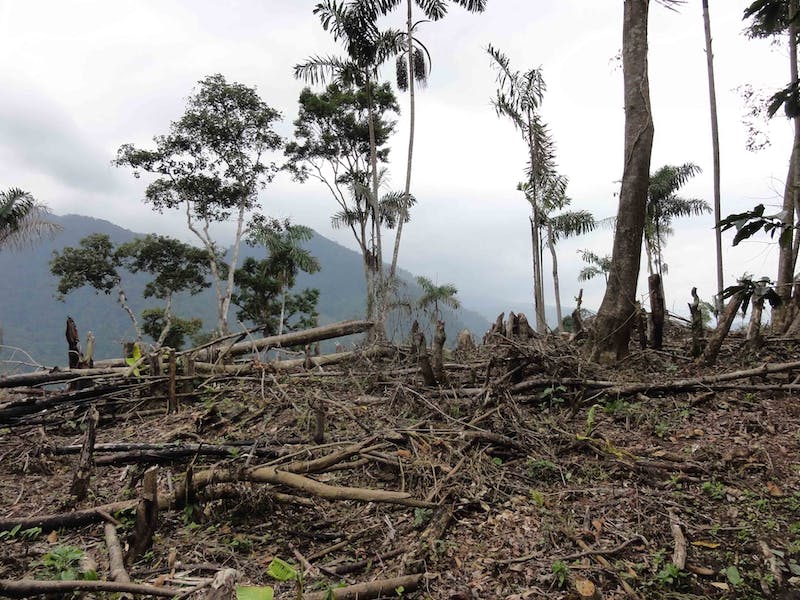 First, with support from the Peruvian government and corporate partners, it introduced incentive-based conservation agreements: After pledging not to cut down the Alto Mayo’s trees, farmers and their families receive agricultural training, as well as other benefits like educational materials and medical supplies.

Second, funding through a REDD+ project (short for Reducing Emissions from Deforestation and forest Degradation, a proposed mechanism to provide financial incentives to countries and landholders that protect and restore forests), helped increase patrolling and surveillance capacity. Even so, 30 full-time rangers are not enough to ably guard the forest’s 182,000 hectares (around 450,000 acres), an area twice the size of New York City. In fact, in 2014, they covered just 12% (23,000 hectares/57,000 acres) — the equivalent of the NYPD patrolling only in Brooklyn.

“The AMPF is in a transition zone between the Peruvian Amazon and the steep hills of the Andes, thus the slopes and variable topography make accessibility difficult,” explained Fabiano Godoy, technical director of CI’s Carbon Fund program. “Because no roads are allowed inside the protected area, rangers use existing trails to monitor illegal activities. Regular patrolling is difficult to maintain as some villages are a 15-hour walk from the nearest road.”

Zeroing in on zero deforestation

Instead of sending rangers on treacherous 15-hour treks, CI is developing a near-real-time forest monitoring system that would mimic human senses.

Picture this: A trained park ranger launches a drone on a pre-programmed flight path over the forest. At pre-determined points along the flight path, the drone deploys lightweight environmental sensors that gently float down to the tree canopy, where they catch and hang above the forest floor collecting the sounds and smells of illegal logging — such as whirring chainsaws, fuel, smoke.

The system is still in concept mode and in need of funding, but if implemented, “this new technology will enable AMPF rangers to vastly extend their patrolled areas and rapidly respond to those threats in order to measurably reduce annual deforestation to zero,” Godoy said.

First, a bit of practice

“I have to fix my reputation,” he says, laughing, referring to his first practice flight a few weeks before, when a wind gust brought the drone down — fast.

Only a small part of the camera mount incurred damage, but Ramírez — patrol and monitoring advisor for SERNANP, the national agency responsible for Peru’s protected natural areas — stepped quickly into problem-solving mode.

Before funding is secured and plans finalized for the real-time monitoring system, CI bought the consumer drone for Ramírez to practice with. In March, he attended a training at Virginia Tech University, where he learned how to operate the drone in automatic mode — which, as he realized on that first practice flight, limits the drone’s full capacity in the AMPF’s often windy and humid conditions.

On this afternoon, the winds are light and Ramírez doesn’t seem too nervous or fazed by visitors. His confidence stems from teaching himself how to operate the drone in manual mode, assisted by online tutorial videos.

“This is highly exciting for the park rangers and for me, but there’s also a lot of stress, especially when it’s windy,” he explains. “The manual mode is much easier and more useful given the altitude and conditions in the Alto Mayo.”

After 10 hours of practice, he can start training AMPF rangers — a slow process, though, since flight time can be limited to as little as 15 minutes, depending on the weight of an attached camera, humidity and other conditions.

Still, it’s a process with potential to transform how forests are monitored and conserved — and not just in Peru. CI is beginning to use drones in its work across the globe, from Suriname to Cambodia.

“The threats encountered in the AMPF are not exclusive to this protected area, but commonly found in protected areas around the world,” Godoy said. “This proposed monitoring system aims to deliver a novel, high-tech and low-cost solution that is replicable to any area of interest.”

If this project works, illegal loggers could have fewer places to hide.

Cassandra Kane is a staff writer for CI. Want to read more stories like this? Sign up for email updates. Donate to Conservation International.