Lights, camera, coral: Under the sea, behind the scenes with a VR film crew

Question: In 15 years on CI’s visual storytelling team, you’ve filmed all over the world. What was special about this trip to eastern Indonesia’s Bird’s Head region?

Answer: After years of seeing incredible video footage and photos from people like Shawn Heinrichs of Blue Sphere Media, our very own Mark Erdmann and other colleagues who have been there, Raja Ampat [an archipelago within the Bird’s Head region] has long been on my bucket list of places to visit and film. When it was picked to be the topic of CI’s first virtual reality film, and I was asked to shoot the “behind-the-scenes” footage, I was thrilled. As a filmmaker who has spent almost my entire career telling visual stories within rectangular, two-dimensional frames, being able to be part of CI’s first-ever virtual reality film experience and to learn about the whole VR production process was very exciting. 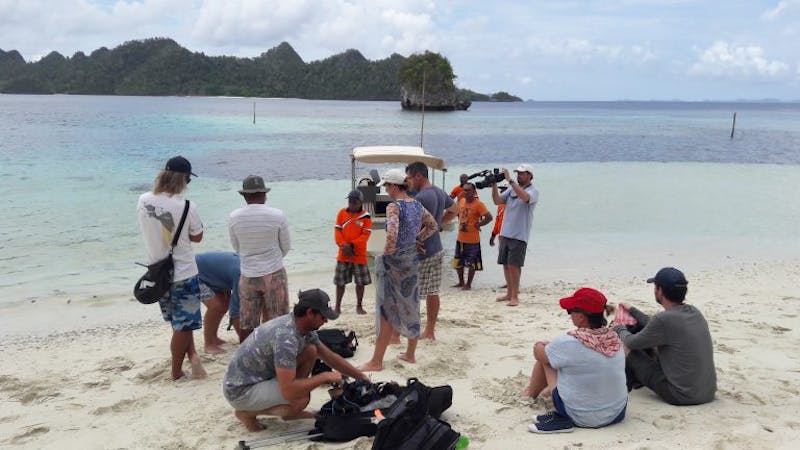 The virtual reality film crew prepares for a scene on a beach in Indonesia’s Bird’s Head region. (photo courtesy of John Martin)

Q: VR has been around for a while, yet it’s just starting to take off and it’s still difficult for many people to access it. In short: Why bother?

A: When we first started brainstorming CI projects to feature in virtual reality, I had never even seen or put on a set of VR gear, and I was honestly kind of skeptical about it. But then I got to Raja Ampat, Indonesia, where at the end of each shooting day we would be able to view the footage with the VR headgear. I was immediately blown away that you could put this mask over your eyes and look in every direction, and be surrounded in this sphere of the world that you saw earlier — or, in the case of most viewers, a world that they’d never seen before in person.

After returning from Indonesia, I went to Las Vegas to attend the 2016 National Association of Broadcasters Conference. It’s a big road show for the television and film industry with all the latest technology, cameras, lenses, lights, drones, etc. VR was the big ticket there. There were a lot of demos where you could put on headgear and view a variety of content, from very abstract 3D graphics to an amazing experience where the viewer witnesses a rhino being transported between reserves in South Africa, such as GoPro’s virtual reality spherical experience “The Last of the Rhinos.” You’re travelling with the rhino, and seeing it be released from its container into the wild. And you really feel like you’re in this world; I felt like I could almost reach out and touch its horn. It was incredibly powerful for me, and helped me better embrace the power of VR.

I walked away that day a lot more excited and motivated, thinking of all the wonderful places I’ve visited with CI and the people I’ve met, and how their stories could be that much more emotional and compelling if seen through this VR experience.

Of course, there is still the challenge of how to allow a massive audience to have this experience, because you need to have the VR tools at hand: the hardware, the headgear, the headphones, and that all costs money. Even the Google Cardboard headsets that are only $15 require a level of know-how that is more than simply turning on a TV or your iPhone and hitting play.

Q: Why was Raja Ampat chosen as the site of CI’s first VR project?

A: From an aesthetic perspective, the site choice was obvious. Many scientists refer to the Bird’s Head it as the “epicenter of the epicenter of the epicenter of marine biodiversity” — almost like the Amazon of the ocean. It hosts a wealth of marine species: fish, coral, big pelagics like whale sharks and aggregations of manta rays. Even the islands themselves around West Papua have really distinctive conical formations — especially the “picture postcard” of Wayag Lagoon, an amazing mini archipelago of rock-pinnacled islands protruding out of the water. 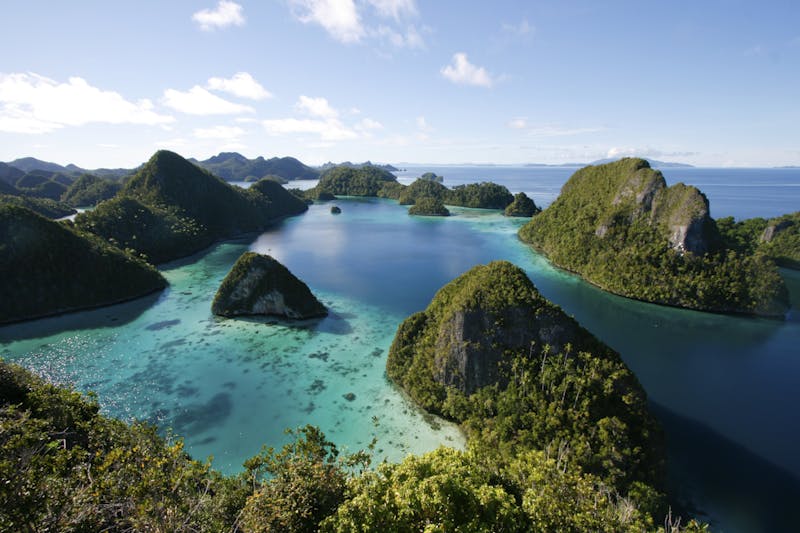 We also chose to film here because it’s one of CI’s flagship field projects. We’ve been working there since 2004 with Papuan communities and partners, and through this process, we’ve ensured a return of the health of the coral reefs which were previously highly threatened due to destructive and illegal fishing practices. Since we’ve started working there, poaching is down, fish and coral are reviving and communities are now taking over the management of their waters. For them, food security and their traditional ways of life are very important. So we’re not only conserving this beautiful place, but also what it represents to the people that live in and around these waters.

The Bird’s Head gives people a vision of what a colorful, healthy, abundant reef can look like. So if you’re going to take somebody on an immersive underwater journey, what better place than this?

Q: What were some of the biggest challenges of this film shoot?

A: One of the first things I learned is when you place a VR camera somewhere, the whole camera crew has to get out of the scene, because it’s filming in all directions. So everything, including microphones and the crew, has to be hidden. And taking this process underwater makes it even more challenging.

First, you have to scout the reef: dive with scuba gear to find the perfect location to place the camera. Raja Ampat’s waters are known for their very strong currents, which often made finding a steady place for the camera difficult. Light also posed a challenge; with virtual reality, you also can’t use lights to light a scene unless you want them to be visible in the shot. You have to rely on natural light. So in order to bring out the colors and make the reef really look stunning, we had to make sure we shot on bright sunny days. The light was not great on the first couple of shooting days, and neither were the currents, yet we still put divers in the water and got what footage we could. Two days later the weather and conditions improved and the crew rushed back underwater and got amazing footage. (Learn more about the challenges of making “Valen’s Reef” in the footage below.)

Other challenges that we encountered were that the crew was based out of a live-aboard boat, so that we could easily move from one site to another at night. A lot of people were staying in very close, air-conditioned living quarters that contrasted with the extreme heat outside; Indonesia is only a few degrees off the equator. Some people came down with the flu, others with head colds, and illness began to spread. Our director got sick the second day in; he had to be taken out and direct the shoot literally from a lodge on a nearby island. One of our local Indonesian staff, Meity, who has been working in the region for many years and helped us around the clock with shoot logistics, fell ill with malaria and had to be evacuated to a hospital.

But in spite of all this, everybody pushed through — and with the support of the local CI Indonesia team and the community of Arborek, we were able to wrap up the shoot with all the footage we needed.

John Martin is the director of CI’s visual storytelling team. Molly Bergen is the senior managing editor of Human Nature. “Valen’s Reef” was created in partnership with leading virtual reality production company Vrse.work and made possible with support from The Tiffany & Co. Foundation.