Last week, a ‘sweeping’ win for the oceans that you didn’t hear about

Editor’s note: Today is the first day of the Our Ocean conference, an annual event hosted by the United States to seek commitments for protecting the ocean. The conference comes on the heels of historic commitments made last week from the presidents of Colombia, Costa Rica and Ecuador, who declared their intention to expand their countries’ pledges to ocean protection. Human Nature sat down with Scott Henderson, vice president of Conservation International (CI)’s Eastern Tropical Pacific Seascape program, to discuss the significance of these commitments, which have largely avoided widespread attention so far.

Question: What did the presidents of Colombia, Ecuador and Costa Rica announce?

Answer: Ecuador reiterated its commitment to rezoning the Galápagos Marine Reserve, beginning with the creation of a 36,000-square-kilometer (13,900-square-mile) fully protected sanctuary in the northwest of the reserve. Colombia stated their intention to quadruple the size (to more than 27,000 square kilometers, or 10,425 square miles) of the fully protected Malpelo Flora and Fauna Sanctuary. Costa Rica announced their intention to create a 10,000-square-kilometer (3,861-square-mile) fully protected area around Cocos National Park.

Here’s why it matters: These three presidents made sweeping commitments that could transform the way their ocean resources are managed, generating incredible benefits for their people. These commitments were made during a ceremony to celebrate the culmination of nearly 30 years of negotiations to agree on the definitive maritime borders between the three countries. Sitting behind these commitments is the growing recognition that creating marine reserves is not a wasted economic opportunity, but just the opposite: President Rafael Correa of Ecuador emphasized that industrial fishermen have told him they are one of the main beneficiaries of the Galápagos Marine Reserve. Effectively, the reserve has served as a massive fish “bank” that pays out “interest” to those that scoop up the abundant spillover on the reserve boundaries. 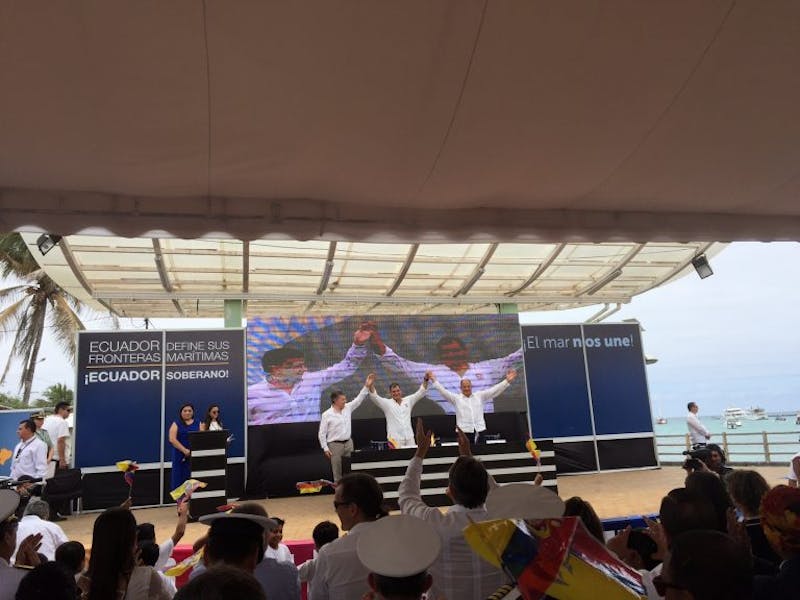 Q: What do these announcements mean for ocean conservation and ocean health?

A: President Correa was quick to note the strong ecological connections — uncovered over the past decade through the work of CI and partners — between Galápagos, Malpelo and Cocos Island. Together they make up the world’s densest cluster of UNESCO Marine World Heritage Sites along with Panama’s Coiba National Park. He emphasized three critical factors that national leaders have often failed to heed and act on. First, small areas provide protection for highly mobile species, especially large pelagic species such as sharks, turtles, rays, whales, seabirds, tuna and billfish. Second, strong protection in just one big area is not enough because these species spend different parts of their life cycles in different places. Third, big reserves in the middle of the ocean don’t do enough — these species often breed, feed or rest in coastal areas that are being lost to development or degraded by pollution.

To give you a sense of the import of this announcement: President Luis Solís of Costa Rica called it “transcendental,” and President Correa emphasized that it is one of the best moments in history for these three nations to cooperate to achieve shared goals. This historic announcement is nothing less than the declaration of a new sustainable development model that puts ocean management at the forefront of national strategies to improve the livelihoods of millions of people. These Latin American leaders have risen to the front of the global pack to act on their belief that marine conservation is a wise investment, not an economic drain.

Q: Describe the biodiversity of this region.

A: The Galápagos Marine Reserve, Malpelo Sanctuary, Cocos Island National Park and Coiba National Park are the crown jewels of the ETPS — the marine version of Africa’s Serengeti. As in the case of the Serengeti where vast herds of large migratory mammals and dependent predators follow seasonal changes, in the ETPS vast populations of iconic migratory marine species — sharks, turtles, rays, whales, seabirds, tuna and billfish — surge back and forth in response to seasonal changes in water temperature and food availability. In fact, these protected areas have registered the highest density of sharks recorded anywhere on Earth and some of the highest fish biomass (total weight per unit area) ever recorded. Cocos is world-renowned for its massive groups of hammerhead sharks and tiger sharks. Coiba is home to the region’s largest coral formations and numerous turtle nesting beaches. Malpelo’s large schools of silky sharks are a major attraction for divers and underwater photographers. Galápagos is home to rare and endemic marine species such as Galápagos penguins and sea lions, as well as more than a third of the world’s whales and dolphin species.

The marine “highways” that connect these sites are some of the world’s great tuna fishing grounds. The coasts that border the ETPS are covered with mangroves, which serve as nurseries for many of these iconic species, and the beaches are nesting grounds for sea turtles.

Q: What are the challenges to making these new protections happen?

A: To make the most of this opportunity three key things must happen. First, the three leaders need to garner support from key constituencies in their countries, especially industrial fishermen and related businesses. Second, these leaders and the full range of ministries that create and implement marine policy in these countries — Environment, Fisheries, Defense, Foreign Relations, Finance and Tourism — will have to all pull in the same direction towards a shared vision of building prosperity around marine conservation and management. Third, the international community will have to be prepared to respond with funding to help overcome the barriers that currently stand in the way of the ETPS becoming an outstanding example of ocean-based development.

There has never been a more promising moment in this region’s marine history.

Cover image: The Galápagos Marine Reserve is just one of three marine protected areas that will expand significantly thanks to sweeping new commitments. (© Will Turner)