In my decades of traveling the world, I’ve gotten to see firsthand many of the fascinating human cultures inhabiting our planet, from the Kayapó of the Brazilian Amazon to the San people of the Kalahari to the multitude of cultures of Melanesia.

Many people from these cultures, including a wide variety of indigenous peoples, live in the most biologically rich regions of our planet — regions that hold the key to maintaining global biodiversity and ensuring the continued flow of ecosystem services — such as fresh water, pollination and clean air — that are essential to the more than 7 billion of us now living on Earth.

Yet as globalization moves forward, many of these traditional and indigenous communities seem to be forgotten or cheated out of the equitable distribution of benefits derived from the ecosystem services they steward. Even worse, as many of these vital habitats and territories bow to the pressures of economic development, so too does our unique cultural heritage, which is ever more endangered.

As conservation scientists, we have always assumed a strong linkage between biodiversity and human cultural diversity, but it’s never been quantified in a way that demonstrates how strongly the two go hand in hand. To remedy this, I and several colleagues recently published a paper in the journal Proceedings of the National Academy of Sciences on the strong and fundamental connections between biodiversity and the diversity of human languages.

There is some discussion regarding the extent to which languages are a good surrogate for human cultural diversity, but it would be hard to find a better indicator. Languages distinguish one cultural group from another, they derive from and reflect the world view of each group of people, and they are a source of pride and a record of history that sets each community apart from even its closest neighbors. Consequently, when we decided to look at the linkages between biodiversity and human cultural diversity, we chose languages as the best manifestation of the diversity of the world’s peoples. 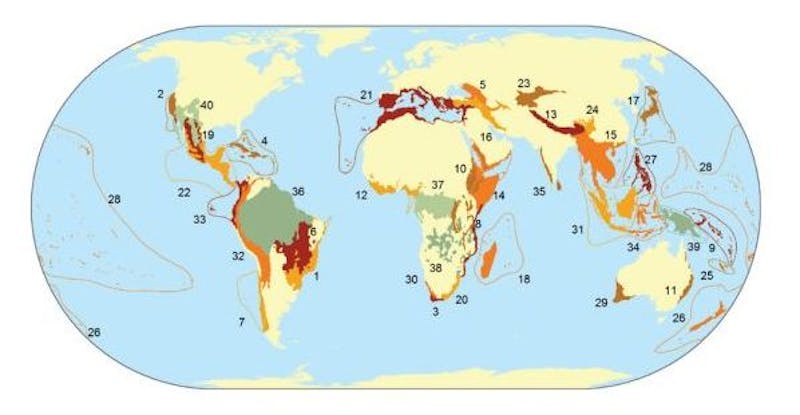 The results of our study — carried out by Larry Gorenflo from Penn State University, Suzanne Romaine from Oxford University, and Kristen Walker Painemilla and myself from CI — were quite remarkable. We began with the best available database on human linguistic diversity from SIL International, which recognizes some 6,900 languages still spoken on our planet. We looked to see how these were distributed globally [see Map 2], especially in relation to the highest priority areas for terrestrial biodiversity — the 35 biodiversity hotspots and the five high biodiversity wilderness areas that have been central to CI’s conservation strategy for the past quarter century.

The biodiversity hotspots are the places on our planet — such as Madagascar, the Philippines, the Tropical Andes and South Africa’s Cape Region — that have lost more than 70 percent of their original natural vegetation and yet still contain high concentrations of endemic species found nowhere else on Earth. Collectively, at least 50 percent of plants and more than 42 percent of vertebrates found in the hotspots are endemics found nowhere else. The planet’s high biodiversity wilderness areas — places like Amazonia, the Congo Forests and the island of New Guinea — are also rich in biodiversity, but are distinguished by still being 70 percent or more intact. 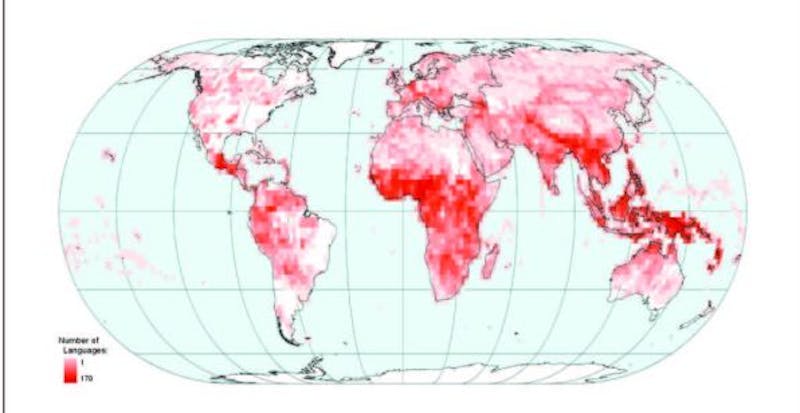 Together, hotspots and high biodiversity wilderness areas are home to at least 67.1 percent of all plants and 50.2 percent of all vertebrate animals. They once covered about 24 percent of Earth’s land surface, but today that coverage has dwindled to an alarming 8.1 percent [see Map 1]. What’s more, if one looks at the endangered species — those at greatest risk of disappearing in the next few decades — we find that between 82–90 percent of the three groups of vertebrates (birds, mammals and amphibians) for which we have the best information are restricted to these priority areas.

Yes, that’s a lot of numbers, but the bottom line is: These biodiversity hotspots and wilderness areas must be among our top priorities for terrestrial conservation if we hope to preserve Earth’s natural ecosystem services and biodiversity for future generations.

Now consider the correlations and added benefits to language diversity. In our research, we found to our great surprise that these areas of exceptionally high biodiversity are also home to an amazing 70 percent (4,824) of the world’s known languages. What is more, many of these languages are also in danger of extinction; other research indicates that 50–90 percent of known languages will have disappeared before the end of the century.

There are numerous theories about why this connection between species and language diversity exists. One possibility is that access to plentiful, diverse resources in places like biodiversity hotspots reduces the likelihood of distinct groups of people needing to communicate and share resources with other groups. Another theory suggests that during the time of colonization, European countries mostly focused on expanding into regions with temperate climates, therefore limiting contact with people in tropical areas where most of the high biological and linguistic diversity still occurs. For example, the highlands of New Guinea — the island with the highest linguistic diversity on Earth — were not explored by the outside world until the early 1930s.

Regardless of the reason behind it, at its most basic level this finding further reinforces an ethos that we have at CI: “People need nature to thrive.” It also shows that we can have real win-win approaches in which efforts to conserve nature and ensure the integrity of human cultures can go hand in hand.

At the Rio+20 conference next month, discussions about the development of healthy sustainable economies will be in the global spotlight. The key message at the heart of these discussions should be that integrating conservation of nature and development initiatives is absolutely essential to maintain the full range of life on Earth, including the amazing diversity, traditions and values of human cultures.

To prevent language extinctions, we must redouble our efforts to prevent biodiversity hotspots and wilderness areas from being converted for short-term gain. If we can do this, I believe that we’ll have a much better chance of saving the language diversity and cultural heritage of our own species.

Dr. Russell Mittermeier is the president of CI. He is also an author, primatologist and chairman of the IUCN/Species Survival Commission Primate Specialist Group.