Following on the recent bat and gibbon discoveries, a new species of lizard (Lygosoma veunsaiensis) has also been described from the Veun Sai-Siem Pang Conservation Area (VSSPCA) in Cambodia’s northeastern forests, adding further conservation value to this site.

The lizard is a new type of skink whose most striking features are its iridescent skin and its long form. Its tail is considerably longer than its body, which together with its very short legs — less than half a centimeter long — amplify its long appearance.

This new species has been named after the region in which it was discovered as a tribute to the area and to underscore the importance of Veun Sai-Siem Pang Conservation Area for the conservation of Cambodia’s threatened biodiversity. This is the third new species in the last two years to be discovered in VSSPCA. Last year a new type of bat was found here, and in 2010 a new gibbon species was described. 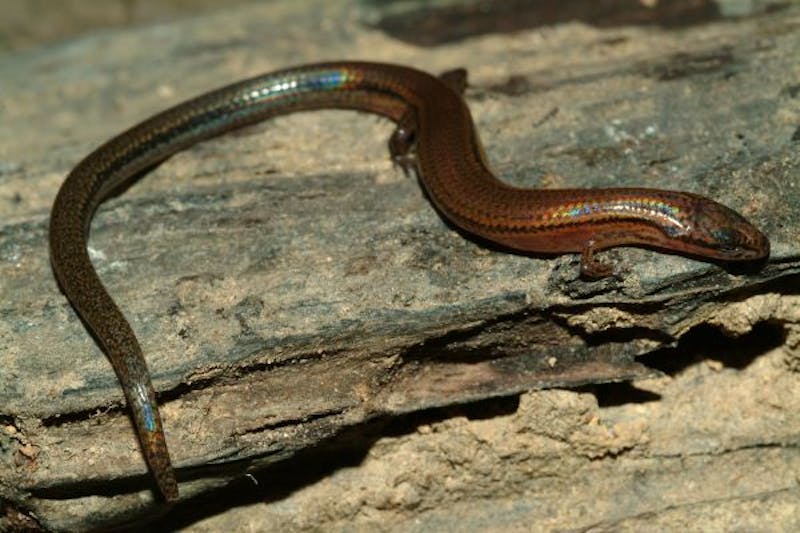 These discoveries are the result of biological assessments led by Fauna & Flora International in partnership with CI, which were carried out in 2010-2011 in VSSPCA. This new species was described from one specimen from the hundreds collected at the site. Of the 45 amphibian and reptile species that have now been recorded, this was the only Lygosoma specimen collected — and a very lucky find, as this type of lizard typically spends much of its time underground.

The results of biological survey work keep coming, and with each new discovery, the case for greater protection of this area is strengthened. As a result of this work, VSSPCA is now known to be extremely high in biodiversity. This species abundance, coupled with the resources and cultural values that local communities receive from this beautiful area, lend additional scientific weight to our hope that VSSPCA will be officially designated as a “protected forest” for its biodiversity value and the well-being of current and future generations.