Glora Padang, a young farmer in the Indonesian province of North Sumatra, learned how to grow coffee from his parents, who five years ago gave him 2 hectares (5 acres) of land in Siempat Rube subdistrict to settle down on.

Like most farmers in the region, Padang grows other crops alongside his coffee, including rice, corn and other vegetables. One recent morning, a trader arrived at Padang’s house to buy some newly harvested crops. Padang sold 13 liters of coffee beans and 4 kilograms of chili peppers that morning, earning Rp. 352,000 (about US$ 32). This moderate income helps him support his wife and infant son — but a stable price for his crops is by no means guaranteed.

Padang explained that coffee contributes significantly to local household income — as much as 30-40%. However, recent price instability and climate change-related issues such as shifts in land suitability and an increase in pest infestations have reduced coffee yields, leading some farmers to convert their coffee lands to citrus production in hopes of generating more income. Padang estimates that about 20 of his neighbors have done this already — and if the price of coffee remains this unpredictable, the numbers may increase, potentially causing further harm to the forest that has long provided for local communities.

A Google Map shows the location of Pakpak Bharat, the district where Siempat Rube is located.

According to government estimates, 81% of Pakpak Bharat, the district where Siempat Rube is located, is dominated by forest. Ecologically, this region is at a critical junction linking some of the island’s major biodiversity strongholds: Sumatran orangutans, tigers, hornbills and many other iconic, rare species can be found in the forests of Batang Gadis National Park and Batang Toru in the south and Gunung Leuser National Park in the north.

From an economic and social perspective, this forest is also a valuable source of income for locals. Traditional laws have long dictated who uses the forest for which purposes — and for more than 40 years, coffee has been the key cash crop for many area farmers, who largely switched 10 years ago from growing Robusta beans to Arabica beans. Although Arabica plants have a lower yield than Robusta, their better-quality beans enable farmers to sell them for a higher price.

Unfortunately, climate change poses a major risk to the future of coffee production in Pakpak Bharat. Conservation International (CI) recently conducted a study examining how impacts attributed to climate change will likely affect coffee’s ability to grow in the region. After examining factors like soil texture, temperature, elevation and rainfall, the study predicted that by 2050, approximately 18,000 hectares (more than 44,000 acres) of currently suitable coffee-growing areas in Pakpak Bharat will lose their suitability as the district becomes hotter and experiences less rainfall.

In recent years, many farmers in Pakpak Bharat have increasingly turned to citrus as a more profitable crop. However, this initial profit comes at a cost. After decades of planting and using intensive chemical fertilizers and pesticides on the crops, many citrus plantations in neighboring Karo district have nearly collapsed due to land degradation and increased pest infestations by species that may have built up an immunity to the chemicals. 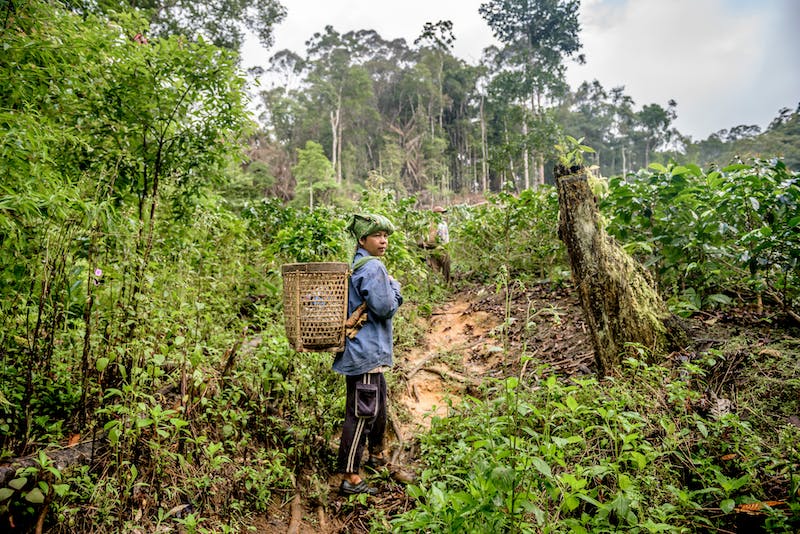 Despite the risks posed by climate change, in a hotter, drier Indonesia, coffee remains a more promising crop than citrus. Even though the price of coffee beans is unstable, income generated from coffee is still higher than that from most other crops. Coffee cultivation also requires less work than other types of agriculture. Unlike many crops that need to be watered every day, coffee can survive for days without rain. It’s also more resistant to pests and diseases compare to citrus and rice. And unlike citrus, coffee grows best when planted in the shade of existing forest.

Padang is among the farmers participating in agricultural education activities organized by CI. Training in a field school provides farmers with skills and knowledge to sustainably increase coffee productivity on existing plantations, thus avoiding the need to expand production into forested areas. Coffee plants can be grown between trees in the 40% of the district’s forest that is used for agroforestry. This minimal effort can help reduce greenhouse gas emissions from deforestation.

The 14 training sessions that Padang attended covered topics from organic fertilizer to pruning techniques. As a result of the training, he has learned to produce natural fertilizer for his crops and made new coffee seedlings using grafting techniques in order to have improved variety. His farm now boasts more than 500 coffee trees, most of an Arabica variety called Sigararutang that was bred to produce more coffee cherries than the average plant, making it more resistant to changes in climate.

As a local farmer, Padang cited the type of training he received — as well as stabilizing coffee prices and expanding support from government — as critical actions necessary to prevent further forest conversion and sustain the tradition of planting coffee in Pakpak Bharat.

Coffee’s future in North Sumatra may be uncertain, but ensuring farmers have the best available resources could help them and their crops to be more resilient in a changing world.

Fitri Hasibuan is the project manager of the Sustainable Agriculture Landscape Partnership at CI Indonesia.

Cover image: Glora Padang, a young Sumatran farmer, is drying coffee beans that a local trader will come and collect. The unpredictability of coffee prices is leading many farmers to turn to citrus production in hopes of earning more income, but the crop’s dependence on chemical fertilizers and pesticides has taken a toll on the environment. (© Conservation International/photo by Syaiful Purba)