Indigenous-led conservation takes center stage in ‘Under the Canopy’ 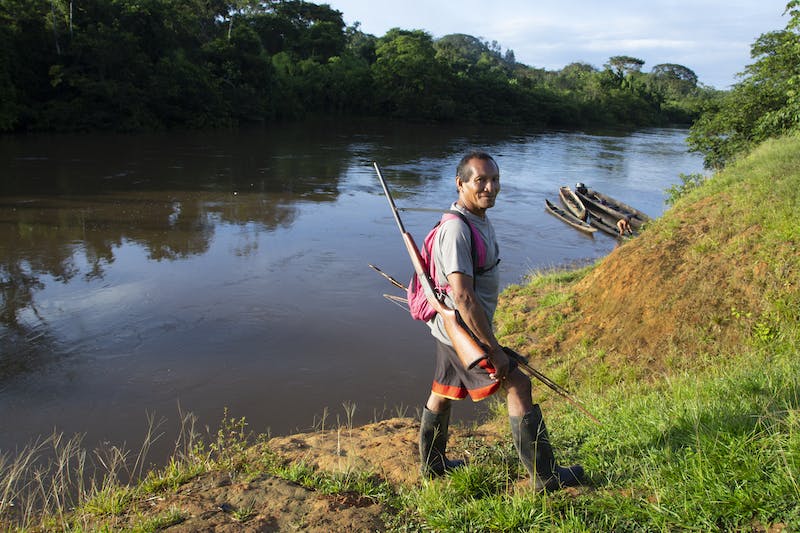 Kamanja Penashekung, an indigenous man who stars in CI’s latest VR film, “Under the Canopy,” stands on the bank of Suriname’s Sipaliwini River at the edge of the Trio village of Kwamalasamutu. (© CI/John Martin)

Editor’s note: Through the groundbreaking medium of virtual reality, Conservation International (CI) is spreading awareness of the plight of the world’s most stunning and vital ecosystems as never before. Last year, CI took viewers underwater in Indonesia’s Bird’s Head region with “ Valen’s Reef.” This week, CI brings viewers into the forest with the launch of its second film, “Under the Canopy.”

Leaves rustle from unseen creatures as you descend into the lush darkness below. Dappled sunlight breaks through the dense canopy, as the drone of insects reminds you of the life found on every branch. A figure approaches along a well-worn path, with wisdom to guide you through the fronds.

This is Amazonia, brought to you through the art of virtual reality.

With “Under the Canopy,” CI takes you to the heart of the Amazon rainforest and introduces you to Kamanja Panashekung, a member of the local indigenous community working to protect the land he has always called home. But his story is more than a compelling anecdote — it is an integral part of 30 years of work by CI and our local partners to save the forest that benefits us all.

The Amazonia region — which includes both the Amazon rainforest and the water-rich Guiana Shield of northern South America — is one of the Earth’s most vital life support systems, providing fresh water, clean air and a home to wildlife and people alike. Nowhere is this more true than in Panashekung’s country of Suriname, home to one of the most intact stretches of rainforest anywhere. The country is widely described as the greenest on the planet, with 94 percent of its original forest cover remaining.

But Suriname has recently seen increased pressure on its forests from logging and mining activities as people struggle to meet daily needs with unsustainable development. To address this growing threat, Panashekung’s Trio community has worked alongside the neighboring Wayana community, CI, WWF and the Amazon Conservation Team to chart a sustainable path forward for community management of the forests of southern Suriname.

This cooperation resulted in a major achievement in 2015 when the Trio and Wayana peoples declared the Southern Suriname Conservation Corridor for over 7.2 million hectares (17.8 million acres) of intact rainforest — an area eight times the size of Yellowstone National Park and nearly half the total land area of Suriname.

The corridor provides 70 percent of Suriname’s fresh water and stores nearly 5.2 billion metric tons of carbon, sequestering an additional 4.2 million metric tons each year — equivalent to the annual emissions of over 3.2 million passenger vehicles. CI scientists, working with the local community, recently described nearly 1,400 species of plants and animals in the corridor — 60 of which were new to science — often despite field challenges such as flooding and bee attacks.

Now the local community is looking to the government of Suriname to recognize the Southern Suriname Conservation Corridor within the nation’s laws. For that to happen, the Surinamese legislature will need to change the country’s nature protection laws to account for this new model of conserved lands where local communities continue to live and are recognized as its stewards.

With a new grant from the John D. and Catherine T. MacArthur Foundation, CI and the Amazon Conservation Team are working to make the Southern Suriname Conservation Corridor a legal and functional reality by training rangers, investing in sustainable livelihoods for communities and providing technical support to the government.

For CI, partnering with the indigenous peoples of Suriname is a natural fit.

“We know that the indigenous and tribal people of Suriname are the first, best and last guardians of our forest,” said John Goedschalk, executive director of CI Suriname. “They have lived there for centuries, they know how the forest behaves and they are the first to know when something is wrong.”

The story reflects two trends in conservation worldwide: the growing influence of indigenous peoples and the establishment of conservation areas with local people as part of the mix.

“Nearly a quarter of the Earth’s land and vast ocean areas are managed by indigenous peoples or local communities — people who live closest to nature and who depend deeply on what it provides,” said CI senior scientist Chris Filardi. “These areas encompass ecosystems vital to all humanity.”

The question of land rights for indigenous peoples is a crucial one for climate policy. A recent study by Rights and Resources Initiative, Woods Hole Research Center and World Resources Institute estimates that at least 24 percent of the total carbon stored aboveground in the world’s tropical forests is managed by indigenous peoples and local communities. But for many of these lands, local stewards lack the legal recognition necessary to prevent deforestation and degradation of the forest for development.

“Directly recognizing and supporting visionary indigenous and local stewardship is one of our greatest opportunities,” said Filardi. “We cannot afford to ignore it.”

Jamey Anderson is a staff writer for Conservation International.