Editor’s note: Tuna are some of the most commonly consumed fish in the world, with different tuna species facing varying degrees of threat depending on the region in question and the catch methods used. In this post, we look at a fishing technique that is snaring more fish than it intends to — with negative effects on tuna populations in the Pacific.

Chances are the fish that went into your last tuna melt or sashimi came from the Western and Central Pacific Ocean (WCPO). This vast expanse of ocean supports the largest tuna fishing grounds in the world; over 50 percent of global tuna catch — including stocks of skipjack, bigeye, yellowfin and albacore tuna — comes from this region.

To find tuna in this swath of ocean, fishers use helicopter observation and other tracking methods. But over the last few decades, some industrial fishing fleets have relied more heavily on another tool to amass fish for an easier catch: fish aggregating devices, or FADs.

What is a FAD?

FADs are floating structures that attract tuna and other oceanic fish with the cover they provide. FADs reflect the age-old observations of nearshore fishers that floating objects like trees and other debris attracted pelagic fish. Pacific Island countries have also been using nearshore FADs, anchored beyond the reef, as a means to ensure food security for rapidly growing coastal populations.

The industrial tuna fishing industry, however, uses thousands of FADs in the WCPO alone. Purse seines — large nets that are set and gradually enclosed around a school of fish — are responsible for the majority of the tuna catch in the WCPO, and their use of FADs has been growing exponentially since the 1970s, with an estimated 29,700 FADs deployed in the region as of 2013.

A portion of the purse-seine fleet uses FADs to increase their efficiency in catching skipjack tuna, a species that is commonly used in canned tuna, and which is still abundant in the WCPO. However, FADs attract more than one species of tuna, and purse seiners are unable to fish selectively. For this reason, vessels targeting skipjack tuna are also catching large numbers of juvenile bigeye tuna — with detrimental effects.

“Purse seiners using industrial drifting FADs tend to take a larger proportion of bigeye tuna, including juveniles,” said Jonathan Peacey, senior director of fisheries at Conservation International (CI). “Bigeye tuna bycatch is a problem because the WCPO population is assessed to be at only 16 percent of its unfished biomass — the naturally occurring population size. This is below the point at which scientists and fisheries managers have concluded urgent action must be taken to rebuild the fishery.” In addition to FADs causing overfishing of bigeye tuna, other species, such as sea turtles and sharks, can become entangled in FADs . 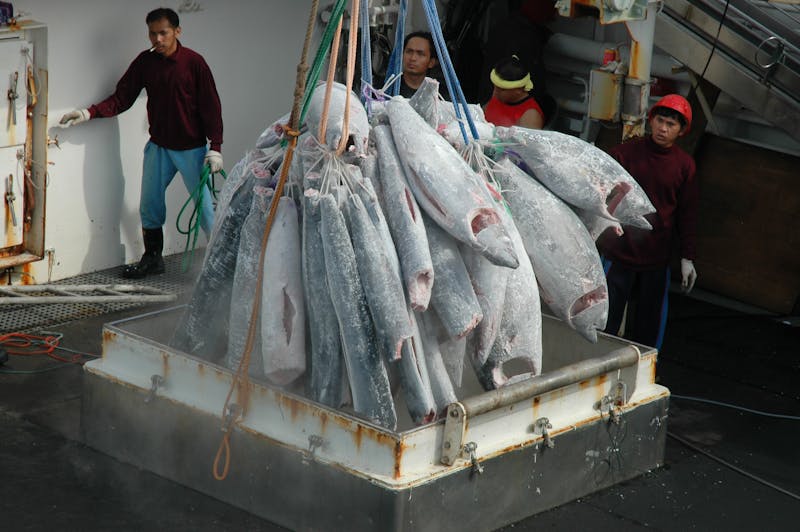 Fish representing various tuna and shark species are transported after being caught in the Indian Ocean. (© George Stoyle/Marine Photobank)

The increasing prevalence and efficiency of industrial tuna fleets fishing around FADs pose a major challenge for fisheries managers. In recent years, FAD technology has grown beyond just aggregating fish. FADs now often include GPS locators, and sonar technology that detect the amount of tuna nearby. This information is then relayed to purse-seine fishers, who can target their fishing efforts more efficiently.

Pacific Island nations, which rely heavily on tuna fishing revenue, and whose exclusive economic zones hold the majority of FADs, are working with the relevant management and scientific fisheries agencies to combat this issue. However, concerns over how best to share the conservation burden among countries and the fleets from distant water fishing nations that fish in their waters have slowed progress.

Specifically, island nations and the industrial fishing industry worry that limiting the amount of fishing on FADs will reduce the efficiency of purse-seine fishing and could lead to diminished returns. This is understandable, given that some Pacific Island countries receive between 50 and 80 percent of their government revenue from access fees paid by boats fishing in their waters.

“Everyone knows the bigeye stock is below the limit reference point and that we need to reduce the impacts of FADs on bigeye tuna,” said Peacey. “Yet countries can’t agree on what action should be taken.” While it’s difficult for countries to agree on changes, these changes are necessary to ensure a sustainable bigeye population and a responsible skipjack tuna fishery.

To combat the negative impacts of industrial FADs, there may be another solution: technology. “What if we could eliminate the problem by designing FADs that do not result in a large bycatch of bigeye tuna?” Peacey wondered.

CI is working to encourage greater investment in finding innovative solutions to FAD bycatch. Peacey and colleagues have proposed possible solutions based on further development of echo-sounding equipment to identify the proportions of each tuna species associated with a particular FAD, and accompanying management measures like vessel bycatch restrictions to provide incentives for vessels to catch only the targeted fish. Another idea is to identify stimuli such as sounds or scents that could separate bigeye tuna from targeted species, and then equip FADs to produce these stimuli.

“New technology has already been used successfully to reduce fishing impacts on marine mammals and seabirds. We are confident that new technology can reduce bigeye bycatch in FAD fisheries,” said Peacey. He and his team are exploring innovative ways to spur action among the industry and tech sectors, including potentially mounting a major competition in which teams comprised of fishing companies, scientists and gear technologists work together to come up with solutions.

Chase Martin is the media coordinator for Conservation International. He holds a master’s degree in marine biodiversity and conservation from Scripps Institution of Oceanography.