In a small house in a remote island village, a group of women sat together, talking and sharing their stories. To an observer, this scene in Milne Bay, Papua New Guinea, might seem ordinary — but in fact it reveals a profound change taking place. Raised in a culture dominated by men, these women have long played an integral role in their families and villages, yet they were rarely asked for their input in community affairs. This was all about to change. 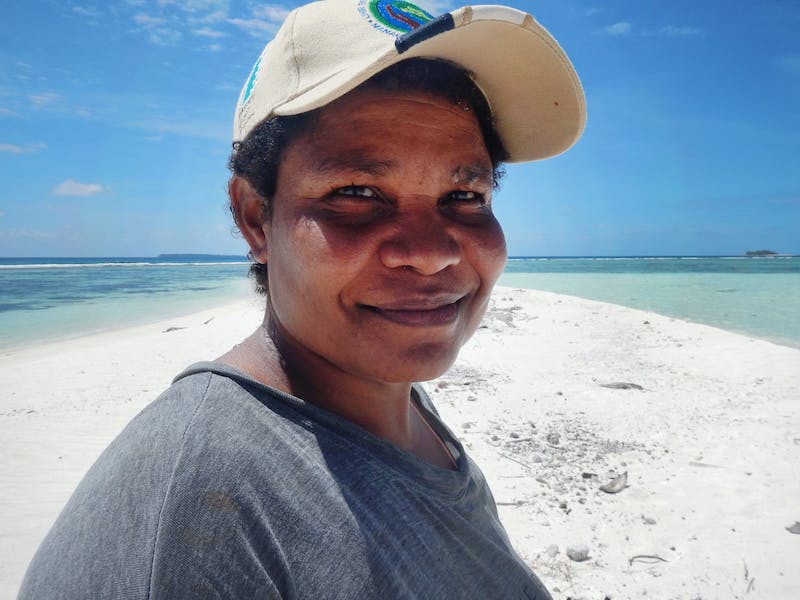 Serena Ketaloya, who lives in the village of Porotona in Papua New Guinea’s Milne Bay province. Ketaloya has been collaborating with CI to start conversations about environmental management among local women, who historically have had little say in community decisions. (© CI/Whitney Anderson)

On the southern tip of the island of New Guinea, Milne Bay is filled with thick forests, rushing streams, long beaches and more than 30% of the country’s coral reefs — all of which combine to stock the kitchens of people like Serena Ketaloya.

On a recent evening, the smells coming from Ketaloya’s kitchen were tantalizing. Warm coconut cream was poured over mounds of steaming sweet potatoes, yams and bananas next to a heaping pot of coconut rice and a bowl of crayfish soup with peas, onions and local leafy vegetables. The sun had just set, and a stream of relatives and neighbors arrived. Helping themselves to generous portions, they sat down, knee to knee, in the simple Papuan kitchen, to enjoy rich food, lively chatter and gentle teasing. On the way out, each echoed “Thank you, mama.”

According to tradition in the matriarchal village of Porotona, where she lives, Ketaloya is the owner and caretaker of her family’s land — a responsibility she takes very seriously. But surprisingly, even in Papua New Guinea’s matriarchal communities, decision-making is largely dominated by men. A member of the reef monitoring team from the island of Wiyaloki counts key species along the transect by marking a chart on his arm. The team works with CI to track the health of local reefs in Milne Bay. (© CI/Whitney Anderson)

Ketaloya’s desire to protect the ecosystems she depends on led her to become involved with Conservation International (CI) Papua New Guinea’s activities in 2002. During the next several years, she spent months in the outermost islands of Milne Bay, discussing responsible fishing practices with some of the region’s most isolated island communities.

Ketaloya understands the pressures these villages face. Her town, like all Milne Bay communities, is facing dramatic changes. The use of dynamite and poison for fishing, overfishing and coastal development have begun to deplete the fish populations that these communities rely on. In addition, an extended drought has made it harder for people to grow food, forcing them to rely more heavily on the sea. As a result, local fishermen travel farther to catch fewer fish.

CI has been working with these communities in Papua New Guinea (PNG) for more than 20 years. However, as with many conservation programs, activities have mostly targeted men, who are often perceived to be the only fishers in the family. This approach does not acknowledge the frequent interaction that women have with the ocean — women catch snapper, mackerel, crab and other species near the shore. Most women here have not participated directly in conservation activities, however, hampering the initiatives’ long-term prospects.

CI PNG has begun incorporating women into community outreach, working with them to understand the major threats to coral reefs and to take actions to protect the reefs for the health of their families. 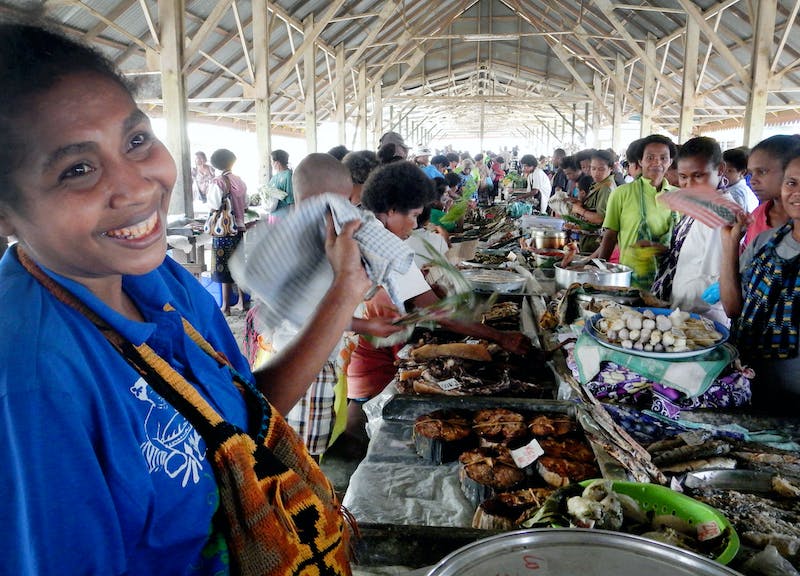 Last year, we helped Ketaloya travel to the islands of Dawson and Kwaraiwa in the outer reaches of Milne Bay on a mission: to talk with the women of these isolated communities and gauge their awareness and opinions about conservation and their changing environment, a necessary first step for fine-tuning conservation activities aimed at women.

With the help of her friend Alice Bailasi from Porotona, Ketaloya spoke with the women of these islands, who described their interactions with the sea, including collecting crabs from tide pools and catching fish in near-shore reefs.

One woman said that when she was young, her family could catch big fish right in front of their beach. There were giant clams the size of adult pigs. Today, people rarely see those big fish and must travel far out to sea to catch them, she said; the giant clams are almost gone. 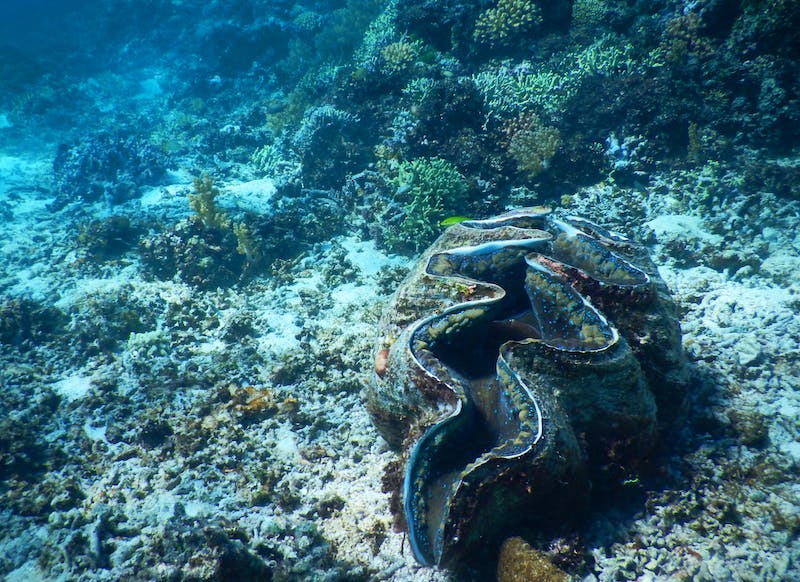 Giant clam near the island of Wiyaloki in Milne Bay province, Papua New Guinea. Although the giant clam population in Milne Bay has shrunk, they are strictly protected in Wiyaloki — hence the size of this one — and the population is growing. (© CI/Whitney Anderson)

The women also spoke of other challenges. Women in Papua New Guinea struggle with domestic violence, and often lack access to social services that can help.

The gathering of women in Dawson and Kwaraiwa was the first time any organization has conducted a project specifically for women on these islands. It’s difficult for all involved: Without leadership from a Papuan woman who is highly respected and truly understands the challenges these women face, I doubt it would have been possible.

Ketaloya believes that educating women about conservation is important. “It is our gardens and our reefs,” she said. “When everything else fails, it will be all we have left.”

Women are rarely the decision-makers in their homes. They are, however, responsible for gathering food from gardens, forests, rivers and reefs, selling food in markets and doing most of the cooking.

For centuries, the knowledge and skills of Papuan women have been passed down from generation to generation. By committing to sustainable practices like limiting the collection of giant clams, these women can not only help the environment they depend on, they can also act as role models for their children.

Building on the work that Ketaloya started, CI PNG aims to hire a female community engagement officer who will continue to work with the women in these and other communities. Change may be slow, but any progress that helps women be more active stewards of their vital reefs is surely a victory.