In Costa Rica, a changing climate offers a teachable moment — for teachers

It was a sight that had never been seen before at Costa Rica’s La Selva Biological Station.

But it wasn’t a glimpse of rare wildlife — it was rain.

In the span of one week in June, the Old Port River near the research facility in the Central American country’s forested interior flooded three times, destroying houses in the surrounding area. It was one the most intense rainfall events ever experienced in Costa Rica, and a sign of things to come, as climate change promises more extreme weather there in the future.

Fitting, then, that Costa Rica is providing a teachable moment on climate science for those who need it most: teachers.

Just weeks after the flooding, the station hosted 16 middle and high school teachers from the U.S. for two weeks of hands-on learning — including a lesson on climate change — that they could take back to their classrooms.

The effects of climate variability on weather are not clear-cut, underscoring the need for teachers to be able to understand the complexity in order to impart it to students.

“Even though climate change may not directly cause extreme events like intense flooding, it will likely contribute to increased frequency,” explained Steve Gaines, Dean of the Bren School of Environmental Science and Management at the University of California-Santa Barbara and a guest lecturer at ECO Classroom.

To help the teachers (and in turn, their students) understand the science of climate change, Gaines offered an analogy from the sports world: “Think of it this way: Baseball players can hit home runs with or without steroids, but tend to hit them more often if they do take steroids.”

Rufous-tailed jacamar observed during ECO Classroom training in Costa Rica. Even though jacamars share many morphological traits with hummingbirds, they are actually more closely related to puffbirds, toucans and woodpeckers. This picture was taken during an early morning bird-watching tour that gave teachers a chance to appreciate the incredible number of bird species in Costa Rica. (© Conservation International/photo by Peggy Lubchenco)

Now in its fourth year, the program aims to send teachers back to their classrooms with new ideas and resources, as well as a better understanding of environmental literacy, especially as the world faces the effects of global climate change.

“Climate change is the biggest environmental and social problem of our generation,” Gaines said. “But it is also a difficult subject to understand, and it is vital that informed scientists communicate clearly to educators about the complexities of climate change.”

“Today’s students will grow up in a world where devastating storms that previously only occurred once every 100 years will now occur every 10 years,” added James MacCarthy, TEAM’s technical and communications manager, who helps run the ECO Classroom program with co-leader Peggy Lubchenco, a specialist in the teaching of science, technology, engineering and mathematics (STEM).

“We thought it was important to provide students with information about this shifting baseline so they understand the impact humans have on the planet’s climate and how this impact could, in turn, have a negative effect on human health and livelihoods.”

After Gaines’ lecture, Lubchenco led the teachers in testing ocean acidification. After adding Alka-Seltzer (the sodium bicarbonate simulates carbon) to glasses of either cold or warm water, the teachers watched an indicator solution change color based on how the added carbon dioxide (CO2) changed the water’s acidity, measured in pH. 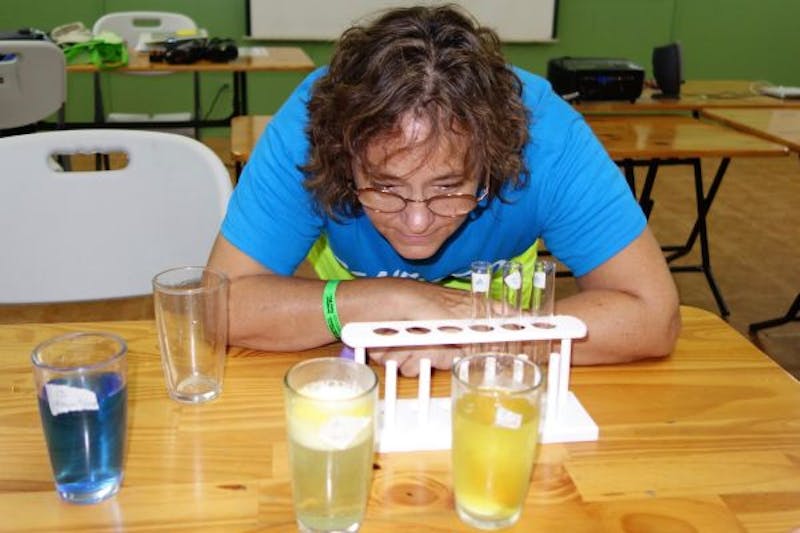 Rhonda Brown and other teachers learn the connection between warming oceans, carbon dioxide and ocean acidification through a hands-on lesson. Warmer water is less able to store carbon dioxide and will lead to higher concentrations of the greenhouse gas in the atmosphere. (© Conservation International/photo by Peggy Lubchenco)

The outcome? The added CO2 lowers the pH of the water (thus making it more acidic). Cold water absorbs more CO2 — which means the world’s warming oceans will not be able to store as much carbon as they do now, leading to higher concentrations of the greenhouse gas in the atmosphere and also creating a negative feedback loop in which oceans continue to warm, further reducing their ability to store CO2.

“Being from Florida, where water is a big issue for us, a hands-on lab that illustrates how climate change is altering the pH of the ocean was great,” said Rhonda Brown, a biology teacher in Groveland. “This will be very helpful for my students, as climate change is just beginning to creep into our curriculum.”

Nature ‘beyond the grasp of many students’

About 1,000 miles away from Brown’s classroom, in Lafayette, Ind., high school zoology teacher Melissa George brings up the subject of ocean acidification in another way: Her students build two reefs with models of sponges, sea anemones and coral, subjecting one to bleaching and discussing how higher ocean temperatures — exacerbated by climate change — destroy algae, which give coral their color and supply much of their food. During another unit on marine invertebrates, students pick an area of the ocean and research how climate change will affect it.

A researcher from the Tirimbina Biological Reserve tells teachers about bat morphology and their diversity in Costa Rica. (© Conservation International/photo by Peggy Lubchenco)

“Teaching in an urban school in a mid-sized, land-locked town in the Midwest, it is challenging to teach students about the effects of climate change because nature is beyond the grasp of many students,” George said.

The firsthand experience that ECO Classroom offers in one of the world’s most biodiverse countries can help George make nature feel more real.

“Teaching in a district with many Latino students, showing them a place where their culture is dominant and respected scientifically is also inspiring,” she said.

Costa Rica’s status as a global environmental leader is eminently teachable: Home to nearly 6% of the world’s biodiversity, the tiny country was the first tropical nation to reverse deforestation. More than a quarter of its land is protected as national parks and reserves.

“I did not realize how important conservation is in Costa Rica before participating in ECO Classroom,” Brown said. “There are so many unspoiled areas of the country. I hope I can take that back to my students and inspire them to even make one change to improve our environment. One small change magnified by 150 students makes a big difference.”

Cover image: Peggy Lubchenco (trip co-leader and STEM Education Specialist for ECO Classroom) tries to cross a flooded path. Heavy rains are not uncommon in La Selva, Costa Rica, but their intensity and frequency may be increasing as a result of climate change. (© Conservation International/photo by Steve Gaines)