“Because of efficient fish smoking technology, which eliminates the need for someone — usually the daughter of the family — to sit in front of the stove for eight hours a day, women in the Tonle Sap now have more time to spend pursuing their own interests and getting an education,” said David Emmett, senior vice president of Conservation International’s Asia Pacific Field Division. “This has been a great step for women’s empowerment.”

Here, Human Nature tells the story of Srey Mom Keng, who is banding together with fellow female fishers in search of higher and more sustainable incomes.

For approximately 1 million people, the floating villages in the middle of Cambodia’s Tonle Sap Lake have everything they need — not just their homes, but also floating gas stations, schools, gardens, even pigsties. The lake is the fourth-most productive inland fishery in the world, providing more than one-third of all the protein eaten by Cambodia’s 15 million people. It is no surprise that these fish — and the flooded forests where the fish live — support the livelihoods of almost everyone who lives on or around the lake.

Or at least they once did. As Cambodia’s population grows and more people migrate to the Tonle Sap floodplain in search of work opportunities, the lake and its resources are being stretched thin. From 1998 to 2008, the number of full-time fishers on the lake grew by 38%; part-time fishers grew 33%. Overfishing and deforestation of surrounding forests for fuelwood and to make space for rice farming and other activities mean that there are fewer fish to be found in the lake — and making a living there is becoming more difficult.

High male fatality rates during the Cambodian civil war and its aftermath has resulted in a disproportionate number of female-led households on the lake. Yet because local Khmer tradition prescribes a passive role for women, these women still have few opportunities to participate in community decision-making. They are also particularly vulnerable to poverty and food insecurity; women have less access to land and property rights, credit, paid employment, education and health services than men do. 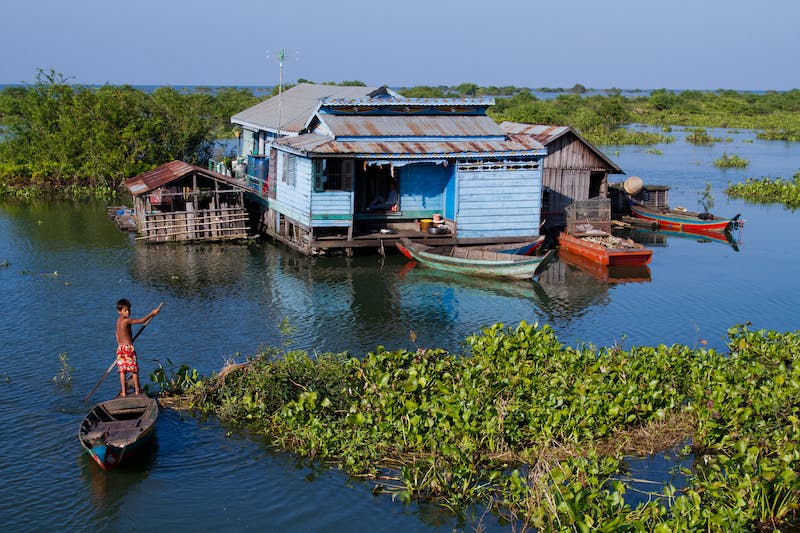 Akol floating village lies in the middle of Cambodia’s Tonle Sap Lake. The families living there are completely reliant on the lake’s fishery and flooded forest for their livelihoods. (© Kristin Harrison & Jeremy Ginsberg)

For more than four years, I’ve been working with a group of women in the floating village of Akol to help them expand their sources of income. In that time I’ve seen how, with guidance and encouragement, Tonle Sap women can organize and collaborate to become confident entrepreneurs, earning and managing independent income to support their families.

Srey Mom Keng is one of those women. A 28-year-old who lives with her grandparents in Akol, Keng and her family depend on fishing not just for food, but for income to buy boat fuel, rice and other necessities. Access to health care is particularly expensive. According to the Asian Development Bank, lake families generally spend about 11% of their household budgets on health care, and about 45% of people report being obliged to take out loans to cover the cost of health emergencies. Some may also help make ends meet after medical bills by taking their children out of school — often starting with the girls.

A few years ago, Keng noticed that she was catching fewer fish than before. She began to realize that as her grandparents age, fishing to make a living won’t be enough to care for them.

To support her grandparents and extended family, she has taken advantage of opportunities introduced by Conservation International (CI) to improve livelihoods throughout the village. Since 2008, CI has been working with Akol and other floating villages to help local men and women establish sustainable livelihoods that preserve the resources they depend on. With women, this work has focused largely on fish processing — traditionally a major source of income. 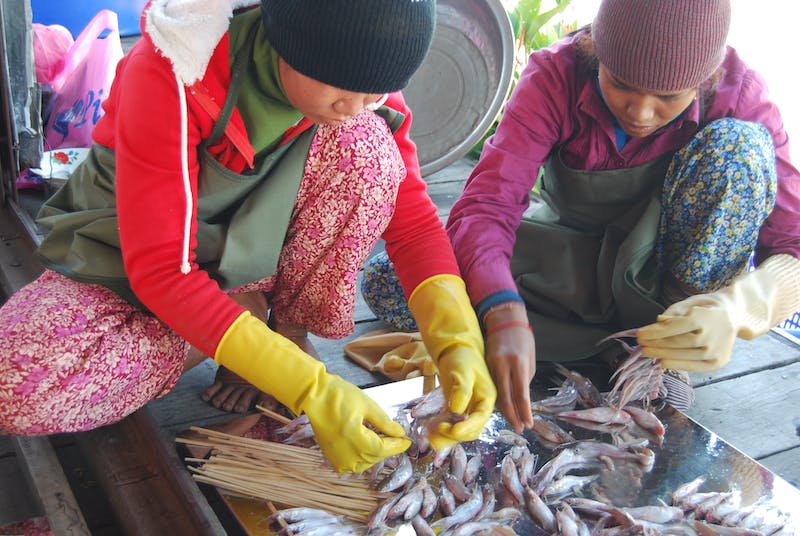 Selling smoked fish and fish paste known as prahok are major sources of income for many lake families. Thanks to training on more hygienic processing practices, fishers are able to sell their product for a higher price, bringing in more income without taking a larger toll on the already stressed fishery. (© CI/Sophak Sett)

Most commonly, women smoke fish, or convert it into Cambodia’s favorite condiment, a paste known as prahok. Processing fish is labor-intensive, and CI staff observed that women such as Keng were getting relatively little financial return for their efforts.

By offering training on improved hygiene practices (like wearing gloves and thoroughly cleaning equipment), better packaging, marketing techniques and pooling their sales to make more profit, CI has helped the women to raise their incomes significantly without putting any further pressure on the fisheries. In addition, the provision of more fuel-efficient stoves has not only reduced the amount of time women must spend smoking the fish; it has also lessened their need for fuelwood, reducing the destruction of the nearby flooded forest and the fish nurseries it harbors. 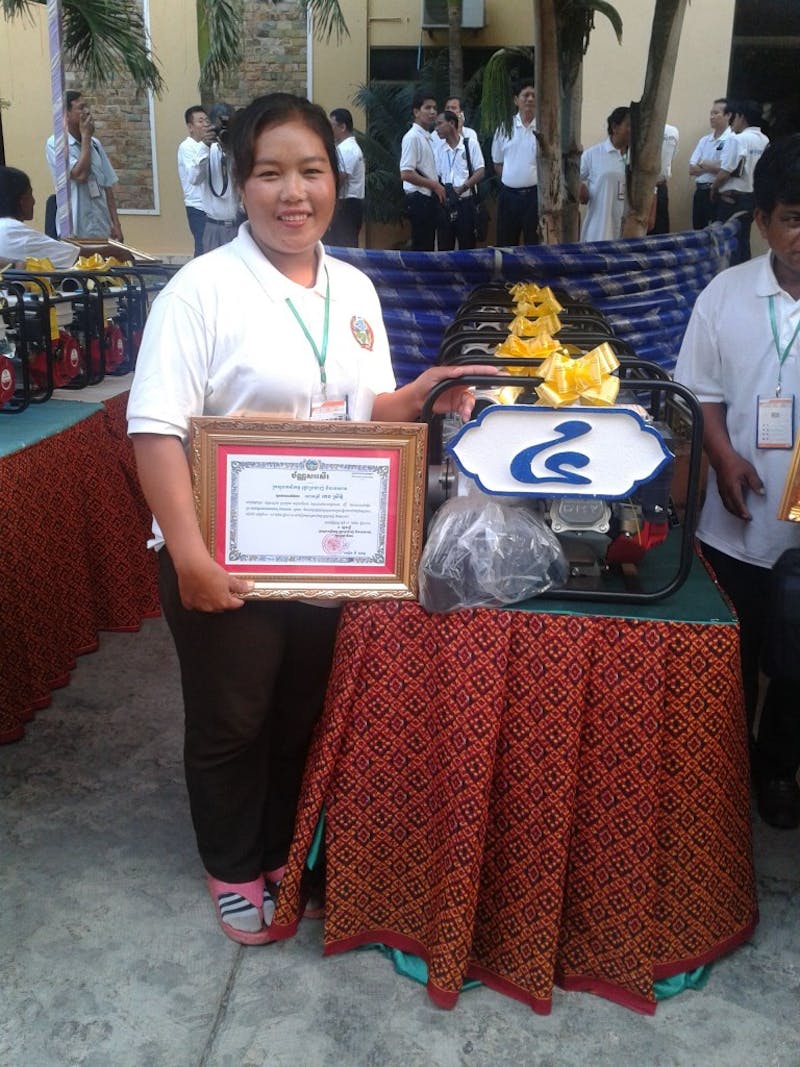 In 2015, Keng was selected to enter her prahok into a national Ministry of Agriculture food and hygiene competition. She won fourth prize and was awarded $US 200.

Each of these small business collectives needs a leader — and when it came to selecting one for Keng’s group, she was a natural choice. Literate and outspoken, Keng is not afraid to voice her opinion or stand up for herself.

Keng also runs a savings group set up by CI to help women pool their profits and offer low-interest loans to each other to keep building their businesses. “This allows us to reduce dependence on loans from micro-finance institutions and local money-lenders,” Keng explained.(Learn more in the film below.)

By illustrating the economic value that women can bring to their households, these savings groups seek to slowly change perceptions about the contributions that women can make to their communities and economies. One important next step: making sure they have the information they need to make informed decisions about resource use.

CI has led several trainings with the savings groups to make members aware of ecological conditions and current laws regarding their use. Keng has taken the lead in her community on ensuring their voices are heard in discussions about natural resource management on the lake. The women’s savings groups are now directly investing the interest from their loans into conservation projects like protecting dry-season ponds and replanting flooded forest. In doing so, they are helping safeguard their own financial futures.

Although there will undoubtedly be challenges, Keng’s outlook for the future is positive.

“Our women’s group helps each other while we encounter a problem,” she said. “In the future, we will be able to say that our community created more business activities by accessing saving group loans. Our fish products will be connected to different markets with premium prices, and we will remain rich in natural resources.”

Top photo: In the floating villages on Cambodia’s Tonle Sap Lake, women are especially vulnerable to poverty; they have less access to land and property rights, credit, paid employment, education and health services than men do. (© Kristin Harrison & Jeremy Ginsberg)