Marine protected area (MPA) effectiveness ultimately depends on enforcement — the park’s ability to catch violators and deter others who would take similar actions — and compliance — persuading people to voluntarily follow the rules. But the ocean is vast, and monitoring large swaths of it requires intensive labor and resources that many countries and communities simply don’t have. In MPAs that lack adequate monitoring and surveillance, enforcement is weak and illegal fishing is almost inevitable, contributing to the one in five fish caught worldwide that are believed to be linked to illegal activities.

There is no silver bullet for stopping illegal fishing. Fortunately, the rise of modern technology combined with expanded community engagement holds much promise of improving fisheries management. In MPAs representing some of the ocean’s unique and most valuable places, communities, governments and organizations like Conservation International (CI) are finding techniques that work. Here are a few of them.

Used in waters around the globe, these satellite-based systems transmit location and movement information from transceivers installed on fishing boats over a certain size. Vessel monitoring systems (VMS) don’t allow park authorities to view all boats in and around an MPA; some boats that (illegally) never had the transceivers installed will remain unmonitored, while other fishers may surreptitiously block the signals to avoid detection. Nonetheless, this tool has caused significant behavior change in many places where it has been implemented.

For example, after a VMS was set up in the Galápagos Marine Reserve by the Galápagos National Park Service and Ecuadorian Navy with support from CI and WildAid, satellite maps revealed that fishing boats were gathering just outside the reserve’s no-take area — not only because monitoring deterred them from venturing inside, but also because the no-take zone’s burgeoning fish populations were spilling over the boundaries. 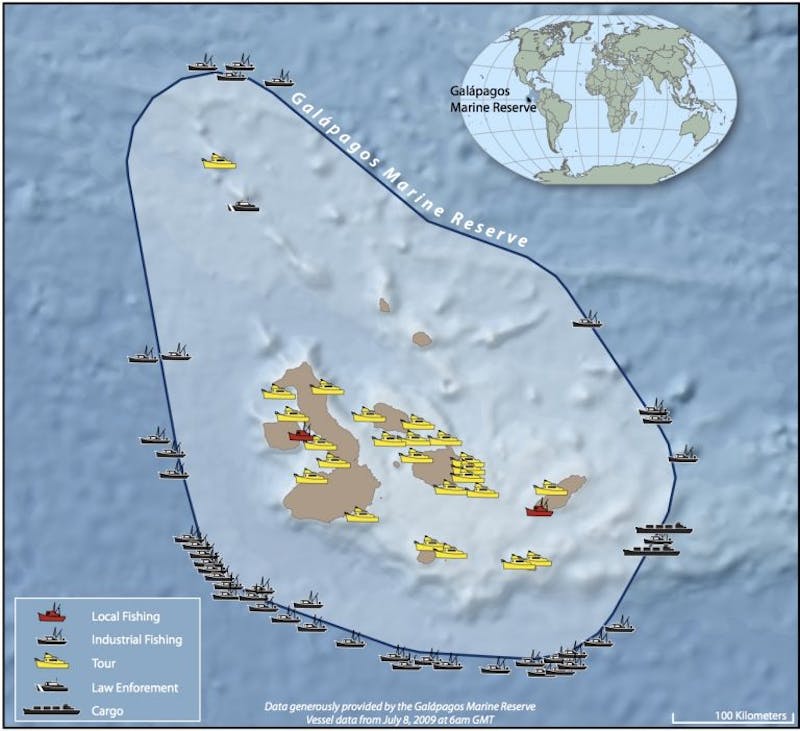 After a vessel monitoring system (VMS) was set up in the Galápagos Marine Reserve, a satellite map revealed fishing boats were gathered just outside the no-take area. (Map courtesy of Galápagos National Park)

Similarly, commercial fishing vessels in the waters of all Pacific Island nations are required to transmit their locations via a VMS. Managed by the Pacific Islands Forum Fisheries Agency on the collective behalf of these nations, the VMS has become a powerful tool for surveillance that — working in tandem with other efforts — has helped monitor Kiribati’s Phoenix Islands Protected Area (PIPA). PIPA’s closure of nearly 400,000 square kilometers (more than 150,000 square miles) to commercial fishing has been described as one of the most historic marine conservation actions this century.

On a more local scale, MPA enforcement looks quite different. In Indonesia’s Bird’s Head region, community members patrol their protected areas in outboard canoes and alert the authorities via text message when they see someone violating the rules.

“In the Raja Ampat archipelago, we have one of the most effective enforcement systems in Indonesia, despite many locals not having access to high-tech monitoring tools,” said Katz, who has worked in this region of Indonesia for nine years. “Local fishers act as extra eyes on the water, sending text messages to their local patrol team when they see violations. It’s a low-tech solution, but it seems to work.”

Sometimes people violate fishing regulations because they don’t have an alternative; other times, they do so because they don’t fully understand the rules or their purpose. By working closely with communities and encouraging compliance, MPAs can save a lot in costly enforcement measures.

CI Indonesia’s Abraham Sianipar attributes the bulk of the success of MPAs in Raja Ampat to CI’s outreach to local people, many of whose ancestors practiced sustainable management for generations before industrial fishing and other threats took a toll. “Local communities have a tradition called sasi in which they close a certain area to all human activities for an agreed period of time, opening it back up for brief harvest periods. This practice is done to give a particular habitat or species the chance to naturally recover. We complement that practice with scientific information gathered by local fishermen, as well as the findings from various marine surveys to improve the effectiveness of the no-take zone at sustaining populations of economically important reef fish species.”

Melding modern science with time-tested cultural traditions is a common strategy to restore ecosystems for the people who need them most. In Hawai‘i, CI and partners have organized lawaiʻa ʻohana (fish camps) in 13 communities across six islands, teaching responsible fishing techniques and natural resource management to more than 2,000 people.

Since 2011, CI Costa Rica and partners have been collaborating with government institutions to implement an advanced radar system around Cocos Island, a major epicenter for marine life, including huge aggregations of sharks. The radar system, which was officially launched last month, is capable of detecting boats 89 kilometers (48 nautical miles) from the island and will relay that information live via satellite to the Costa Rican Coastguard on the mainland. By detecting the movement and direction of vessels, radar operators will be able to tell if a boat is just passing through an MPA or fishing in it. Radar technology is essential in places like Costa Rica, where most boats lack a VMS.

“Radar monitoring is usually seen as a ‘stick’ kind of motivation, but it’s also a ‘carrot’,” said Marco Quesada, the country director of CI Costa Rica. “By closely monitoring boat positions, authorities can find boats in inclement weather or other disasters, potentially saving lives. In addition, radar can be a valuable tool to monitor marine traffic and collect climate data.”

Cutting-edge technology has huge potential to reduce illegal activities in MPAs, but the truth is that many under-funded MPAs don’t have a much simpler tool available: boats. In addition to allowing park officials to monitor their MPAs and catch illegal fishing vessels, their presence may also act as a deterrent.

For Cocos Island National Park in Costa Rica, where there are only two small boats and about 24 rangers, illegal fishing has run so rampant in certain years that the sustainability of local marine resources is in jeopardy. However, progress is being made. “The coastguard recently announced the purchase of two patrol boats with oceanic capabilities, which will aid enforcement of the country’s huge exclusive economic zone,” Quesada said. “Thanks to these boats and the new radar system, enforcement in Cocos will see a significant improvement that will help protect Costa Rica’s largest protected area.”

More boats can also help authorities monitor what is happening in the water and raise the alarm about legal yet unsustainable practices.

In 2013, CI partnered with Hawai‘i’s  Department of Land and Natural Resources to launch a Community Fisheries Enforcement Unit (CFEU) — the first of its kind in Hawai‘i. In its first year in operation, this team spurred a 90 percent compliance rate with fishing regulations around the island of Maui.

Two years later, fisheries officers from the CFEU observed during one of their regular patrols several people harvesting a large collection of sea cucumbers, reportedly to export for medicinal use. Concerned that this was the sign of a growing trend, the state of Hawai‘i took quick action, banning the commercial sale of the species in January 2016.

While all of these tools can play an important role in ramping up protection of the ocean’s most valuable — and threatened — areas, none of them will work in isolation.

“The application of new technologies — drones, satellite tracking and other approaches — is really transforming MPA management, and we must keep pushing the envelope around these types of innovations” said Jack Kittinger, senior director of CI Hawai‘i. “However, successful enforcement requires the entire enforcement chain to work.”

Sue Taei, executive director of CI’s Pacific Oceanscape program, has seen the impact of a holistic approach firsthand in the management of PIPA. “The effective closure of PIPA to commercial fishing is quite amazing to some, considering Kiribati has only one patrol vessel and more than 3 million square kilometers (1.2 million square miles) of ocean domain. The key to success was careful planning; community outreach and training; layering surveillance and enforcement efforts; and ensuring policy and legal frameworks were in place for successful compliance. In order to successfully manage the giant dynamic, interconnected system that is the ocean, fisheries enforcement systems at all levels — local, national and global — must join forces.”

Cover image: Illegal shark fishing along with increasing demand for shark fin soup has led to the removal of 95% of these scalloped hammerheads in the Galápagos Islands. (© Jeff Litton/Marine Photobank)