How Incan ruins and Brazil nuts are fighting deforestation in Bolivia

Editor’s note: Human Nature is exploring the complexities of living in, using and protecting one of the planet’s most valuable types of ecosystems — tropical forests — in a series we’re calling “No forest, no future.”

In the forests of northwestern Bolivia, an Incan fortress bears witness to the architectural prowess of an ancient civilization.

However, for the indigenous Tacana nation, it also points toward a new future.

“We have decided that this area from which we used to extract wood will now be used for nature-based and archaeological tourism,” explained Javier Delgadillo, leader of the Tacana community of Macahua. “I think we have made the right decision.”

Macahua is one of six indigenous communities in Bolivia’s La Paz region committed to protecting nearly 55,000 hectares (136,000 acres) of forest through conservation agreements.

In Macahua, the villagers saw the potential to boost their incomes through ecotourism. Through the conservation agreement, they received training from Conservation International’s Bolivia program on how to establish and oversee a tourism center. In return, they agreed to stop logging and selling timber from their 10,000 hectares (25,000 acres) of forest.

CI also helped the community connect with other partners, including the Inter-American Development Bank, the World Bank and a local ecotourism business, to expand the project and construct an ecolodge that can accommodate up to 16 guests. 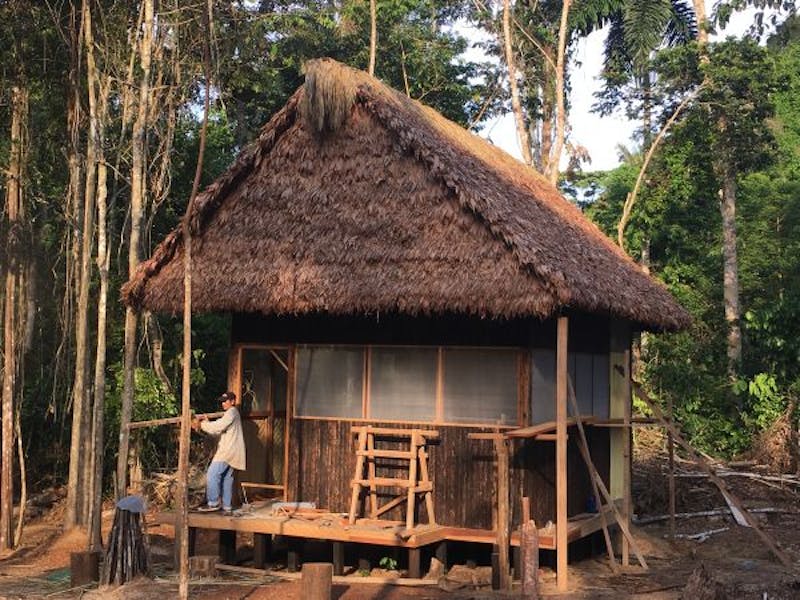 Ecolodge in Macahua, Bolivia. Thanks in part to a conservation agreement, the residents of this village have agreed to stop logging nearby forests in favor of more sustainable income opportunities such as tourism. (© Conservation International/photo by Alejandro Rosselli)

This area of Bolivia extends from the foothills of the Andes, where the southwest Amazon moist forest is home to rare populations of species such as the saddle-back tamarin and spider monkey. As the watershed for the Madre de Dios and Beni rivers — which eventually connect with the Amazon River in Brazil — the region provides fresh water and other essential benefits, such as carbon storage, to local communities.

These forests are much more valuable left standing. While deforestation here is relatively low compared to other parts of Bolivia — rates are highest in the lowlands in the eastern half of the nation — potential threats, such as population growth, loom.

And in a country crippled by its worst drought in 25 years, proactive measures to protect forests that absorb rainfall in important watersheds will be crucial to help mitigate future water shortages.

“There is currently a window of opportunity to protect these watersheds, before more environmentally degrading interests work their way into this part of the country and the opportunity costs of conservation increase dramatically,” explained Margarita Mora, executive director of the Conservation Stewards Program. “The goal is to provide a sustainable alternative to local communities in this region that reduces deforestation and enhances livelihoods.”

A similar program in the nearby region of Pando paved the way for curbing deforestation in the La Paz area.

COMSERBO itself was inspired by Ecuador’s Socio Bosque program, which also aims to promote community conservation of indigenous lands and avoiding deforestation while promoting human well-being.

“Making conservation possible is a huge challenge, requiring creativity and the ability to copy and improve models from other countries,” said Candido Pastor, a technical manager for CI Bolivia. “In fact, we are piloting the conservation agreements approach with the aim that other organizations will model and improve upon the ideas that we propose.”

While Macahua elected to focus on promoting tourism, residents of the town of San Javier in western Pando were determined to protect an important wild commodity growing in their forest: Brazil nuts, the harvesting and selling of which accounts for nearly 70 percent of household incomes in the community.

“The benefit of the COMSERBO program is that it has provided us with non-local materials,” community member Carmelo Mercado explained. “We were able to pay wages to build our payoles [collection centers], in which we can store the Brazil nuts to prevent them from being damaged. Moreover, we can keep the nuts there until the time when the price goes up.”

“The neighboring communities are jealous of this infrastructure,” Mercado continued, “and they also want to be part of the program. We could never have done this without external support.”

Launching ecotourism enterprises and improving nut harvesting methods are just two small steps on the long road toward CI’s ultimate goal in Amazonia: zero net deforestation by 2020. But successful examples like these can show the Bolivian government, private funders and other NGOs that the conservation agreements approach works — and can be expanded across Bolivia and Amazonia at large to improve livelihoods, secure important resources and mitigate climate change.

Since 2012, conservation agreements with 13 indigenous communities across the La Paz and Pando departments have benefited over 2,000 people, all the while keeping over 100,000 hectares (almost 250,000 acres) of forest intact.

But the potential for more is immense: The Tacana nation alone has title to 389,000 hectares (961,000 acres), divided among 20 communities.CI expects to sign conservation agreements with all of them, as well as other indigenous communities, over the next few years.

“In Bolivia, the indigenous peoples have made the decision to respect and protect the nature they rely on for current and future generations, but they also want to be better off economically, “Pastor explained. “Providing the right incentives to empower them to choose to protect their forests is a viable solution — and one we aim to replicate across the Bolivian Amazon, and even the globe.”