How 3,000 holes in the dirt can save a barren land — and alter a social landscape

The temperature hovered near freezing as farmer Katrina Schwartz and I stood before 3,000 shallow holes stretching as far as the eye could see.

A sudden freeze had recently hit Leliefontein, a town in the South African region of Namaqualand, after a long drought, causing major livestock losses for farmers. Land had turned barren; degraded by plowing and dominated by kraalbos and renosterbos, unpalatable plants that quickly dominate the landscape, soil restoration was an urgent priority.

But this pitted landscape — aimed at catching water and reducing erosion — is about more than rejuvenating barren soil. These tiny holes, it turns out, are small blows against a stubborn social divide in South Africa. 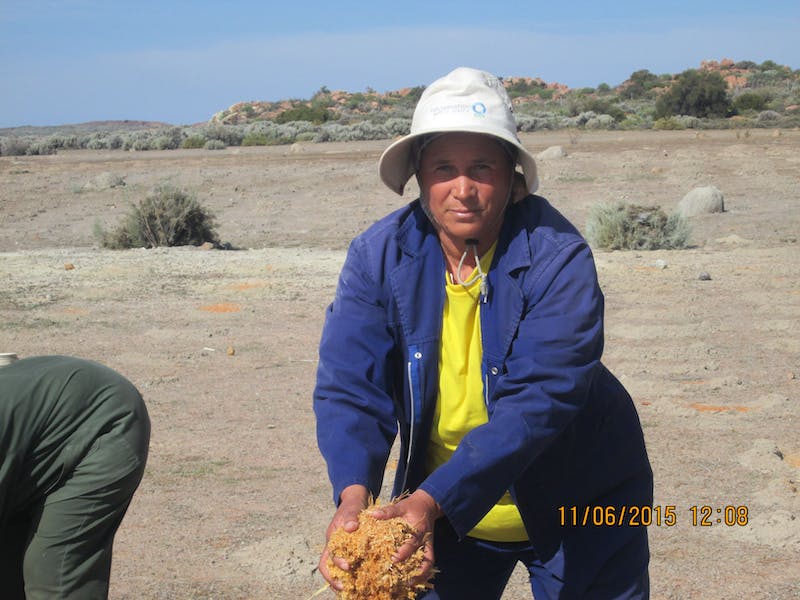 Namaqualand, in the west of South Africa, is a landscape of vast open spaces, fields of wildflowers, extreme weather and poor (but tough) farming communities. Local livelihoods are threatened by increasing droughts in summer and freezing cold winters, degraded natural resources, disappearance of wildlife caused by agriculture and mining, and increased poverty — evidenced by rising unemployment levels. Land ownership here is highly polarized by race, gender and culture.

In 1956, thousands of of South African women led a landmark march against apartheid, chanting “Strike a woman and you strike a rock.” This march shook the political landscape and centralized women’s role in democratizing the country; it helped inspire a constitution that enforced human rights and gender equality, promising a better life for all South Africans. Yet decades later, things have not changed as much as many had hoped.

In communities like Leliefontein, traditional land systems and social norms have long favored men as landowners. There are some women farmers, though most farmers and herders are men. Other women in the region have frequent contact with the natural environment, where they collect veldkos (wild food such as roots, bulbs and berries), medicine and fuelwood.

Twelve years ago, when Conservation International (CI) began working in the region, human rights and gender equality were not talked about here. But as we began to talk with local communities, we saw an opportunity to effect broader change.

To encourage communities to take better care of their land, CI formed conservation agreements with local farmers, the majority of whom, like in most countries, are male. Under these agreements, farmers commit to reduce livestock numbers to improve rangeland conditions and to protect fragile wetlands. In return, they receive incentives such as medicine, animal feed and training to improve the health of their livestock.

As part of the agreements, men were required to attend meetings and training workshops, but most of them could not, tending to their fields or working away from home. So the women of Leliefontein began attending the meetings on behalf of their male relatives.

The result: Women began to directly influence decision-making in the community.

“I first attended the meeting and saw the training opportunities, and decided to attend all of them to learn more about farming,” Katrina Schwartz said. Women also began to benefit from the conservation agreements themselves, drawing them more actively into farming and rangeland activities. 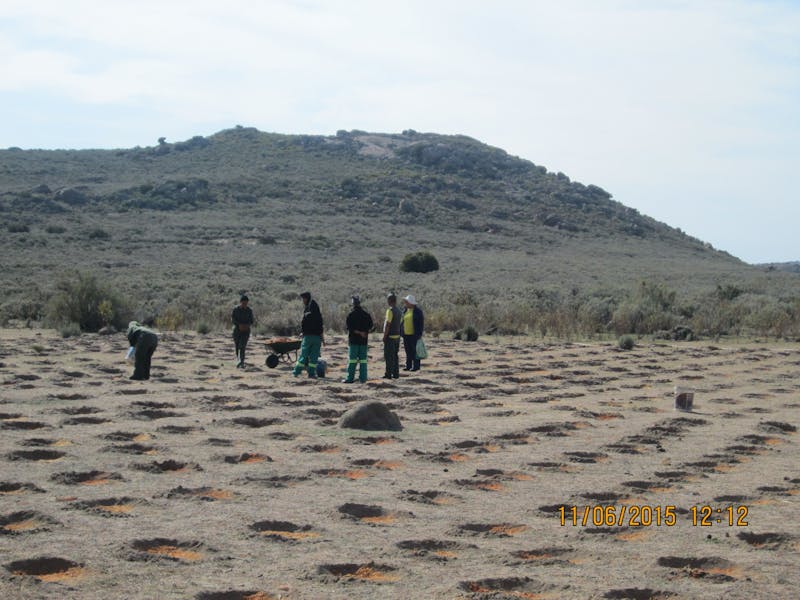 The “holes” project on the degraded rangeland is just one example of this restoration work. Schwartz led a team of 26 mostly female workers in the placement and digging of these holes 20 centimeters (8 inches) deep, which are meant to fight erosion. Called “micro catchments,” the holes are covered with red sawdust from recently felled invasive poplar trees. The holes slow the speed of runoff water, allowing more time for the water to absorb into the soil and creating a more suitable environment for native seedlings to germinate. Over the next three years, we aim to restore 274,676 hectares (678,739 acres) of communal rangeland.

Having women like Schwartz on our side has slowly brought about a dramatic change in Namaqualand — for women, men and the fragile ecosystem. After villagers started asking questions about the funny holes in the ground, Schwartz and her team were educating their community the finer points about erosion, water retention and the benefits of improved grazing.

Thanks to their salaries as restoration workers, these women are now breadwinners, and their interaction with livestock and pastureland has been transformed: They can now identify edible plants and treat animal diseases — improving the quality of the stock and enabling the women to negotiate higher prices for their animals. 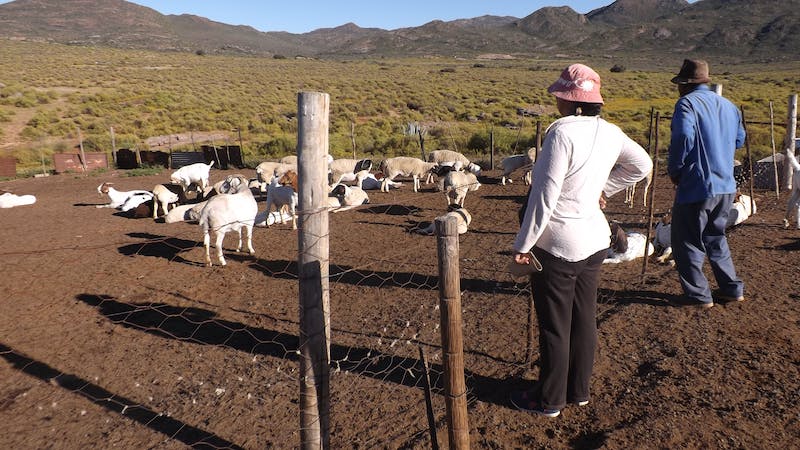 Katrina counting livestock in Namaqualand. Through the conservation agreements, farmers agree to limit the number of livestock they keep on their lands. (© CSA)

Not everyone sees these changes in the community as beneficial. When a recent survey in Leliefontein asked men what they think women need in order to become more involved in farming, some echoed stereotypes that women lack the physical strength to work with stock and should stick to traditional food- and fuelwood-gathering activities.

These sentiments are not enough to stop the change that has begun. But with new changes come new questions.

The government employment guidelines require that 60% of workers in all government-funded projects be women — but how sustainable is gender equality when we attach quotas to it? If some women are going to work while their unemployed husbands stay at home, is that really better than the other way around? And what of the discontent of young unemployed men?

Government programs that focus on job creation and skill building are usually short-lived. What will it mean for these women when the contracts come to an end, especially those who don’t have livestock? How can we ensure that those lands will continue to be managed sustainably — and that communities will continue to benefit?

Being a black woman born and bred in Namaqualand, I know that as with racial tensions, addressing deep-seated gender inequalities won’t happen overnight. Each community presents a unique set of opportunities and people through which change can happen.

But village by village, women like Schwartz are proving that they are a force to be reckoned with.