Fishing for New Species in Suriname

In 2010, CI’s Trond Larsen joined a team of scientists in southwestern Suriname for a Rapid Assessment Program (RAP) survey. The results, announced today, include the discovery of more than 40 species new to science. Here on CI’s blog, Trond recounts one day on the expedition.

After lugging 97 kilos [214 pounds] of canned sauerkraut deep into the heart of the Surinamese rainforest, I decided it was my duty to catch a fish or two. Of course, I pretended to be motivated only by scientific research, and jokingly promised to deliver a new species for the fish biologists on the expedition. As our native Trio guide steered the dugout canoe away from camp, the setting sun illuminated a giant kapok tree, crowned by the brilliant rainbow of a passing thunderstorm. We scrambled onto a pair of large boulders in the middle of the river and I tossed a hook baited with a chunk of piranha into the water. 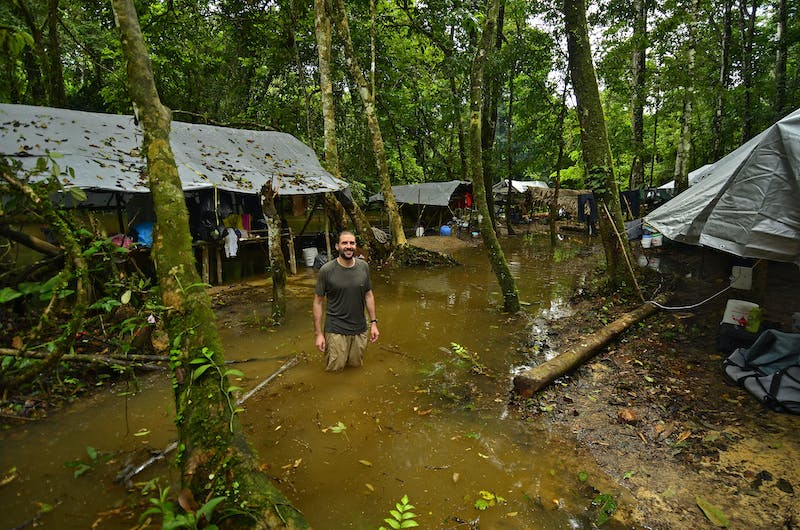 Unusually strong and long-lasting rain caused the Upper Palumeu River to flood its banks, completely inundating our camp and forcing the team to move sooner than planned. Here, RAP Director Trond Larsen stands in the middle of the formerly dry camp. © Trond Larsen

I breathed in the musty air and began to tune into all five senses, which had been dulled by too much time in Washington, D.C. Clouds of aquatic insects rose wispily from the river’s surface, taking to wing after months of life underwater. Deep, throaty croaks of gladiator frogs (among the world’s largest tree frog species), punctuated the songs of thousands of crickets and katydids. A spectral pair of glowing yellow eyes danced eerily amongst the dark trees at the water’s edge. I recognized the lights as the sexual display of a large male click beetle, one of thousands of insect species in the region, many of which remain undiscovered by scientists.

Just as I watched a meteoroid’s fiery plummet into the Earth’s atmosphere, I felt a quick tug at the fishing line in my hand and instinctively yanked back. I excitedly pulled in a striped catfish with long whisker-like barbels. The fish specialists informed me that while the catfish was not new to science, it was a new species for our current expedition. The specimen was preserved for the museum collection, leaving my dinner plate free for extra sauerkraut atop my rice that evening. 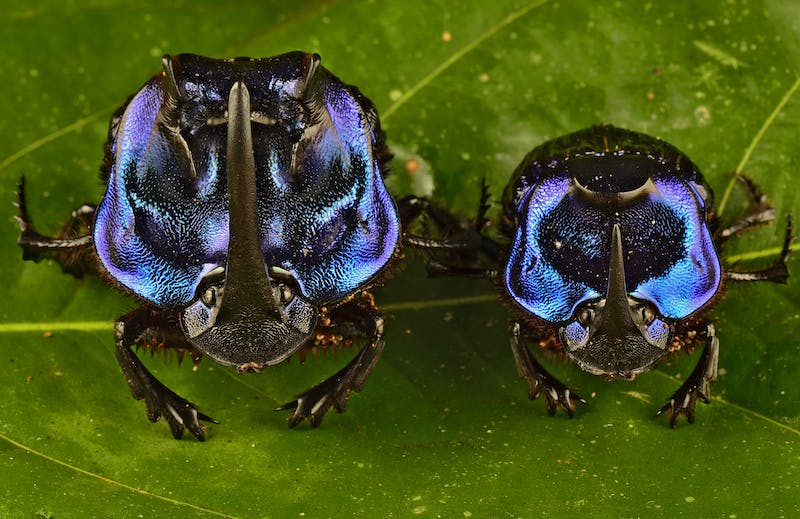 Coprophanaeus lancifer is the largest of all South American dung beetles. Despite its name, this species feeds more frequently on carrion (dead animals) than on dung. The vast difference in adult body size seen here is primarily determined by how much food was available to the developing larva. © Trond Larsen

Altogether our expedition discovered over 40 previously unknown species, including fish, a frog, katydids, damselflies, water beetles and my own specialty, scarab beetles. CI’s RAP has led expeditions like this for over two decades, uncovering hundreds of new species, but we have a long way to go and not enough time. It’s imperative that we understand which species exist and where they live if we are to prevent them from becoming extinct, a problem facing thousands of species globally. RAP works to fill this knowledge gap, sending teams of scientists to remote but critically important field sites around the world.

Conserving biodiversity is also fundamental to maintaining healthy ecosystems and the many services that nature provides to people. Consequently, on this RAP expedition we worked closely with the local indigenous Trio community and with Surinamese students. This was a fantastic opportunity for the scientists to benefit from the Trio’s tremendous wealth of knowledge regarding their natural environment, and also for the Trio participants and students to learn about scientific methods used by biologists.

Working together, we were able to develop important strategies for sustainable management of natural resources, which is essential for the Trio people who rely heavily on their surrounding rivers and forests for food. By training students and engaging local communities, RAP expeditions can help to ensure the preservation of healthy ecosystems for many generations to come.

Trond Larsen is the director of CI’s Rapid Assessment Program (RAP). Learn more about the Suriname RAP — and see more photos — on the expedition page.