A ban on commercial fishing in one of the world’s most significant hotspots of marine biodiversity appears to be working, according to a new report.

The proof is in the pictures — in this case, satellite images compiled by Global Fishing Watch, a web-based platform developed by the marine conservation organization Oceana, in partnership with Google and SkyTruth.

The hotspot in question, the Phoenix Islands Protected Area (PIPA) — a Montana-sized swath of ocean set aside as a marine protected area by the island nation of Kiribati in 2006 — was declared off-limits to all commercial fishing in 2015. According to the report, Global Fishing Watch revealed a stark reduction in the number of fishing vessels detected there after the policy was enacted. 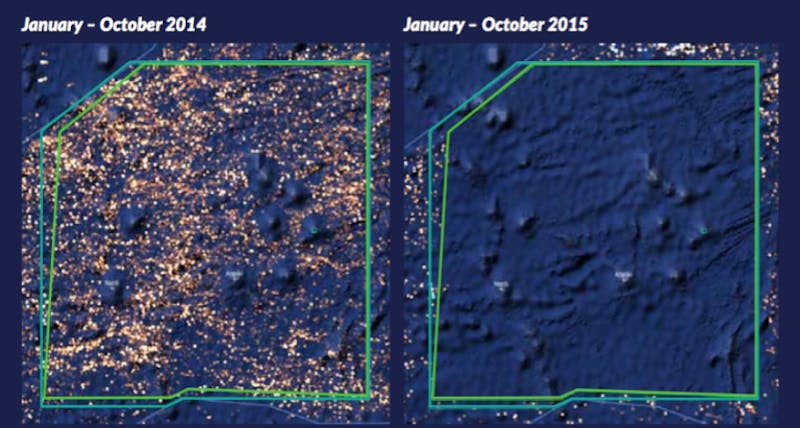 Bright spots in the satellite image at left signify the presence of fishing vessels within the waters of the Phoenix Islands Protected Area (outlined in green) in 2014. The image at right shows the area in the same 10-month period in 2015. Image credit: Global Fishing Watch

Monitoring and enforcing a ban on fishing in such a vast and remote area of ocean was all but impossible without recent advances in satellite technology and ship tracking. The new report shows the promise of this technology as a crucial piece of the puzzle for protecting oceans, proponents say.

“When sound policy, effective monitoring and reliable enforcement work together, we can truly protect important ocean ecosystems,” Jacqueline Savitz of Oceana said in a statement released Thursday. “With a fishing ban in place in PIPA, commercial fishing vessels seem to have gone elsewhere, giving tuna and other important fish stocks a chance to recover and seed other fishing grounds.”

Applying the same formula of policy, monitoring and enforcement in other marine protected areas, she said, might help to protect other marine ecosystems from illegal fishing of the kind chronicled recently in a recent New York Times report on poachers in the Pacific.

Intact, isolated and under pressure

Located within the Republic of Kiribati in the heart of the Pacific Ocean, the Phoenix Islands are one of Earth’s last intact oceanic coral archipelago ecosystems, boasting more than 120 species of coral and 514 species of reef fish. The ecosystem has remained intact in large part due to its relative isolation, but the growing reach and sophistication of commercial fishing had begun to put increasing pressure on one of its most prized resources: the tuna that spawn in the region. The west central Pacific, which includes PIPA, is home to the largest tuna fishery on the planet.

This tuna is crucial both to Kiribati’s economy and to its own food security, and for years, groups including Conservation International have been working with Kiribati to better manage and protect its territorial waters, an area the size of India. Revenue from commercial fishing and licensing in other parts of Kiribati’s waters amount to almost half its national income; however, due to its large span and limited monitoring capacity, Kiribati loses untold millions of dollars of income per year from illegal, unreported and unregulated fishing in its surrounding ocean waters.

Experts are hopeful that the tide may be turning.

“It is beautiful when a plan comes together the way PIPA has, and the data [that] Global Fishing Watch has provided us is a sign that large-scale ocean management can work,” said oceans expert Greg Stone, an executive vice president at Conservation International (CI) and an adviser to the government of Kiribati. “The government of Kiribati, the New England Aquarium and CI have been working for the better part of two decades to get PIPA to this point, and though we are seeing validation of success, we know PIPA’s story is just beginning and we need to remain vigilant.”

The report can be read here.

Cover image: A lively reef in the Phoenix Islands Protected Area, set aside as a marine protected area by the island nation of Kiribati in 2006. Commercial fishing was banned there in 2015. (© Keith A. Ellenbogen)