Editor’s note: From the depths of the ocean to the heart of the rainforest, Conservation International (CI) staff have had their share of spooky — and downright dangerous — moments in the field. To celebrate Halloween, Human Nature asked CI staff to describe their most spine-tingling experiences in nature. 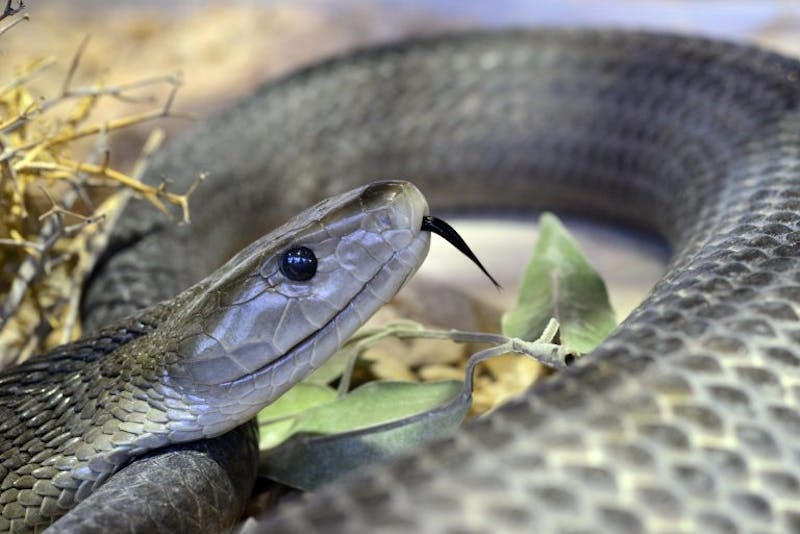 Keith Roberts, executive director for wildlife trafficking: I was in the Hluhluwe-Imfolozi Game Reserve in South Africa in the late 1990s looking for firewood when I saw an old decaying log. As I walked towards it, I thought that it would make a comfortable spot for a snake. Just then, literally at my feet, a huge black mamba snake reared up out of the short grass. I was on my own in the middle of nowhere, and mambas have a fast-acting and fatal bite. On top of that, they are notoriously aggressive! The snake was way over my head, and I involuntary jumped back a bit. At the same time, I pointed my rifle at it from my hip. We looked at each other for a while, and then it spun around. I heard it thump on the ground as it sped it off in a typically mamba sense, with about a third of its body above the ground. I abandoned my search for firewood, went and sat by the river and thought about life for a while. 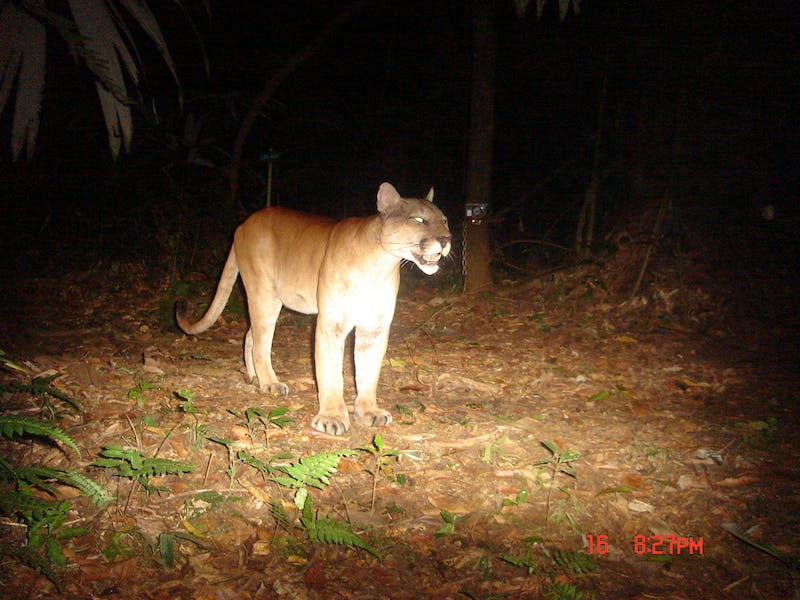 A cougar. (© Courtesy of TEAM Network)

Trond Larsen, director, Rapid Assessment Program: While conducting a biological survey near the Lost City in Honduras in 2017, a newly discovered set of ruins deep within the Mosquitia rainforest, I had a rare encounter with a big cat. At night, in the rain, my gaze met that of a puma. Up to 3 feet tall and weighing up to 220 pounds, pumas are known to kill humans. Standing only paces apart and with nowhere to turn on either side, we stared each other down. The cat gradually stalked towards me, padding on massive paws and stooping even lower on its front haunches as if ready to pounce. Its silent, effortless approach flowed like liquid. My adrenaline began pumping. My hairs stood on end. As the distance closed by half, the large puma’s sleek golden coat became visible. Then, as quickly as its eyes had appeared, the puma spun around and disappeared once again into the blackness of the forest. 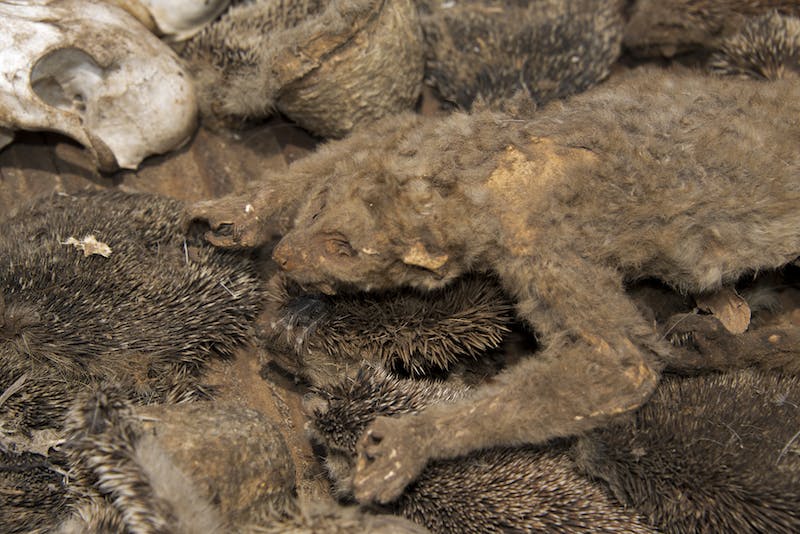 Animal bodies for sale. (© Conservation International/photo by Russell A. Mittermeier)

John Martin, director of video production: I’ve had a few scary moments in the field, though never with wild animals, only with humans. Soon after Conservation International set up its first field presence in the Cardamom mountains in Cambodia in 2001, we hired a team of Military Police as rangers to patrol area in an effort to stop the illegal wildlife trade. To provide a fast response, patrolling required rangers to move across rough terrain on dirt motorcycles. I was out on patrol with seven rangers, armed with AK-47’s, sitting on the back of one of their motorcycles with my camera when a radio call came in that a vehicle carrying smuggled illegal wildlife products had been identified.

A rush of adrenaline overtook the rangers and we rushed like “Mad Max” across the forest to intercept the vehicle. Three rangers made the stop and ordered the vehicle to be emptied. The vehicle was carrying bananas, firewood, pigs and chickens. Hidden underneath these items was deer and wild pig meat, dried-up lorises (a primate) and illegal resin. As the rangers began to issue a citation, we noticed three armed men with AK-47 rifles approaching down the road. The scene got tense. The people from the vehicle indicated that the men were bushmeat traders and former Khmer Rouge who were awaiting their vehicle. We all thought a firefight would ensue. Four rangers hopped on their motorcycles, held on to their weapons and rushed down to intercept the men. After 15 minutes of tense discussions, the men turned back and retreated. Rangers burned the illegal wildlife products at the scene. 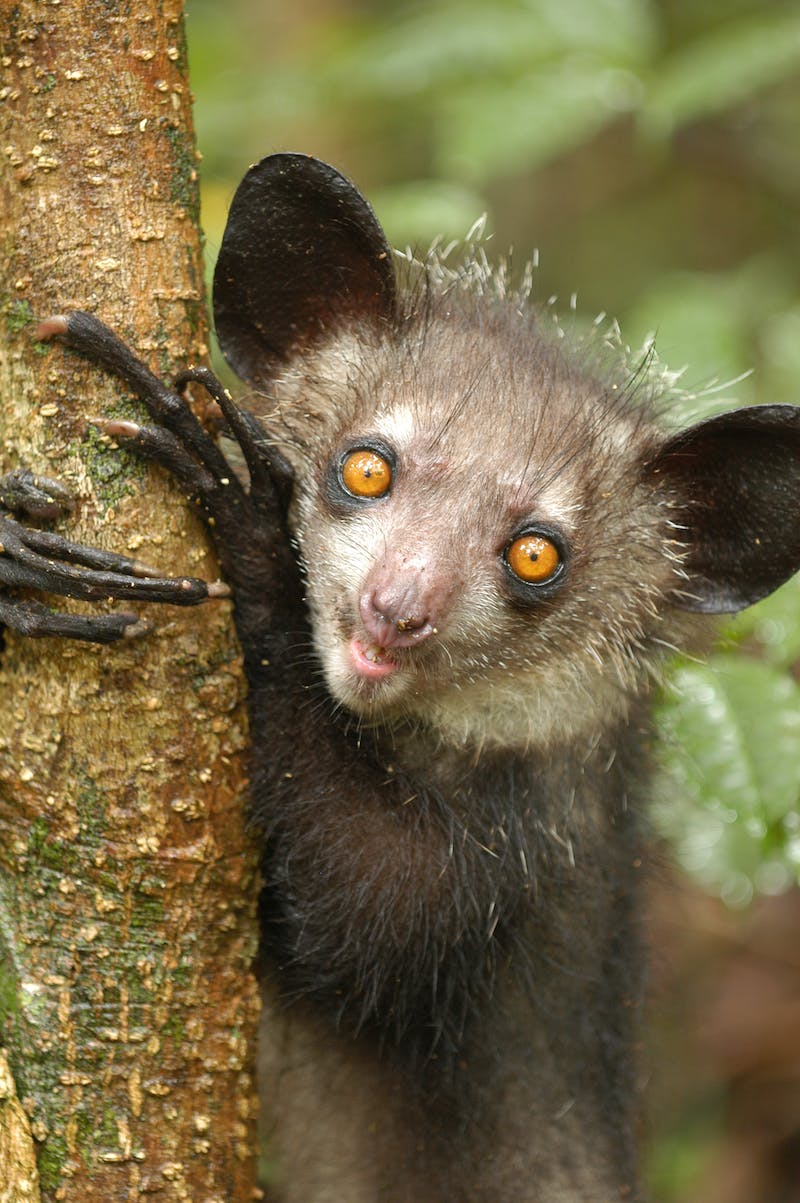 Rachel Neugarten, director, conservation priority-setting: In Madagascar, a group of us got to see a mother and baby aye-aye lemur in the wild; this encounter was more creepy than scary! Aye-aye lemurs are harmless, but with their glowing orange eyes and bizarrely elongated middle finger (used for reaching deep into tree trunks to remove tasty grubs) they are one of the spookiest-looking mammals in the wild. Like all lemurs, they exist only in Madagascar, and are threatened by loss of habitat. Since they’re nocturnal and extremely shy, it’s almost impossible to see one. Luckily, we learned about a project in which researchers had put a radio collar on a female aye-aye to track her movements.

We set out at sunset, following our guides on forested paths. As it grew dark, the terrain became steeper. Eventually, to find the tree where the aye-aye was sleeping, we had to leave the trail and bushwhack through the forest. It was now completely dark, and the mountain was so steep that we had to crawl, using our hands to hold on to the vegetation and rocks to keep our footing. When we arrived at the tree where the mother aye-aye was sleeping, hidden in a hole in the tree, we waited for over an hour, quietly. We knew we might have to wait for many hours, or not see her at all if she decided she didn’t feel safe leaving her tree. Eventually, she appeared, turning her glowing eyes on us only for a fraction of a second before disappearing into the dark forest. Her youngster, however, was curious about us, and climbed down just inches from my friend’s face before following his mother into the shadows. It was a magical, spooky moment. 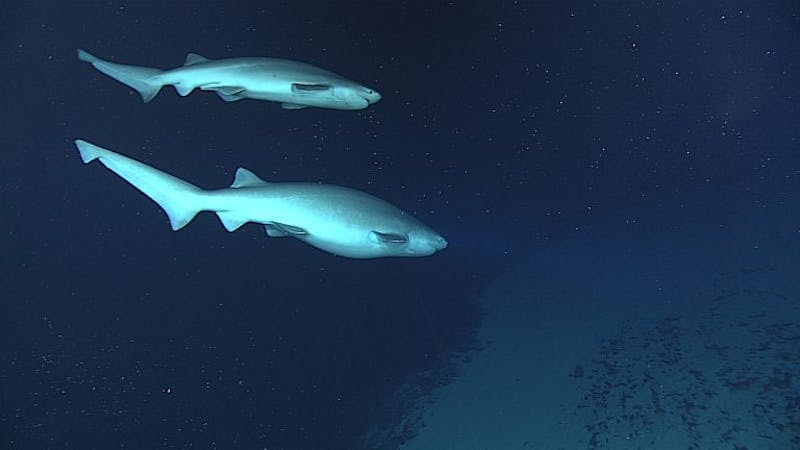 A pair of male and female sixgill sharks. (© NOAA Office of Ocean Exploration and Research)

Greg Stone, executive vice president, Center for Oceans: Much of the last 30 years I’ve spent underwater, exploring the deep on thousands of scuba dives and numerous submersible trips to 18,000 feet (5,500 meters) below the surface. Yet during all these journeys, I have only rarely encountered some of the ocean’s biggest mysteries: deep-sea sharks. Once, I chanced upon the bluntnose sixgill shark at a depth of 6,000 feet (1,800 meters). These deep-sea varieties are tough, aggressive and found everywhere in the deep ocean. The sixgill shark can grow up to 16 feet (5 meters) long and 1,300 pounds and can attack like a great white shark, but with a stronger bite. Though primarily a deep-sea species, some make trips to the shallows at night, allowing for the unsuspecting night-diver to chance upon them. Thankfully, I made it out of the water just fine. 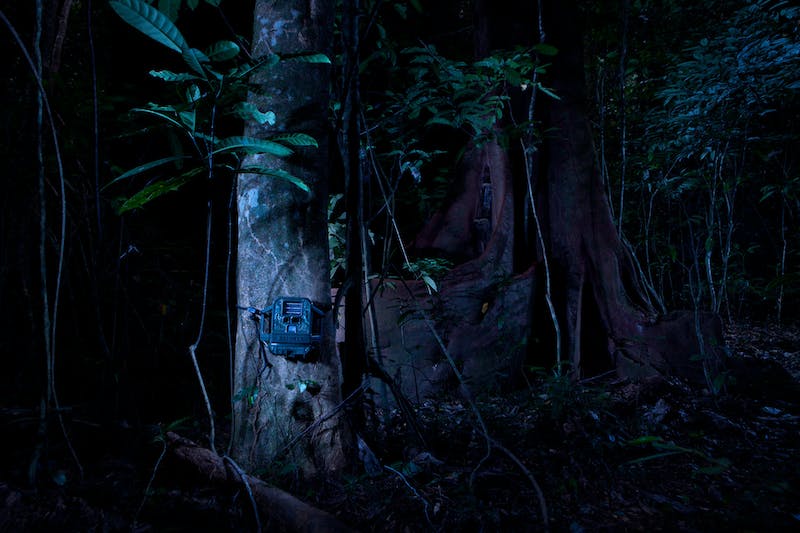 David Emmett, senior vice president, Asia Pacific Field Division: I’ve had some scary moments that involved dangerous animals, such as accidentally stumbling into an Asian elephant in Cambodia in the middle of the night while looking for frogs, or waking a family of sleeping baboons in Tanzania while out searching for chameleons. Both ended in chaos with loud animal calls and me running full speed back to camp!

But the scariest moment actually involved just me and my imagination in the dark. It was a new moon in Tanzania — a dark, perfect night for using mist nets to capture bats. While everyone else slept, I stayed up to catch more species in the jungles of the Usambara Mountains, where the clouds were hanging low and swirling in the trees. Then, when walking from the mist nets back to camp at 4 a.m., my torch battery died, plunging me into total darkness. I tried to crawl along the narrow path back to camp, but lost my way and fell down a slope. Deciding that the best plan was to sit tight until morning, I leaned against a tree and tried to relax. The forest came alive with rustling leaves and hooting owls, and my imagination ran wild. I imagined a leopard grabbing me, or a cobra accidentally slithering to my side. By the time the sun came up, I was a nervous wreck! Once I could see again, I found the path and went to camp, very relieved.

Leah Duran is a staff writer for Conservation International.