Elephants with a trust fund? Endowment to protect future of a ‘magical’ forest

When I first visited southwest Cambodia’s Cardamom Mountains back in 2003, we drove all day on dirt roads and crossed rivers on precarious ferries made of several boats lashed together. The forest overhung the road; wild animals scurried for cover as we drove past.

More than a decade later, much has changed. The road is wide tarmac, a major connector to Thailand. The rivers have bridges. Much of the forest is degraded, and wildlife is scarce. Forest loss in this landscape is as high as 30% in some areas. Vast swaths of forest have been cleared illegally.

But within the boundaries of the Central Cardamom Protected Forest (CCPF), it’s a different story. 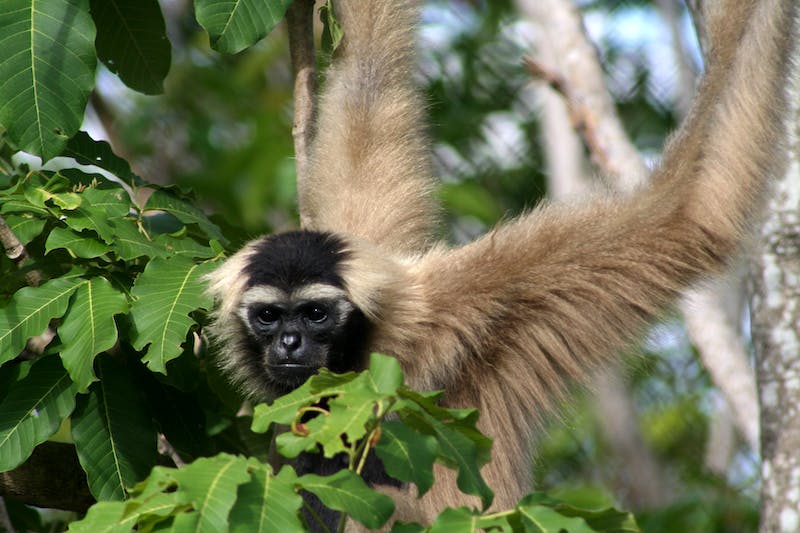 The Central Cardamom Protected Forest is home to some of Cambodia’s last wild populations of endangered species, such as the pileated gibbon and Asian elephant. (© Conservation International/Photo by David Emmett)

When I visited the CCPF last year, I was still able to walk through dense rainforest and see endangered wild dogs, rare gibbons, hornbills, fresh signs of elephants and bears, and large numbers of common species such as deer, wild pigs and civets.

Why so many animals? Their habitat remains almost as intact today as it was back in 2003; in fact, it’s among the most pristine forests in the country. Between 2006 and 2012, only 2% of the Rhode Island-sized protected forest was cleared — compared with 15% in the 10-kilometer (6-mile) buffer zone around it. All these years later, it’s still a magical place — and it will remain so, as Conservation International (CI) has just created a trust fund that will provide the money needed to conserve this incredible area in perpetuity. 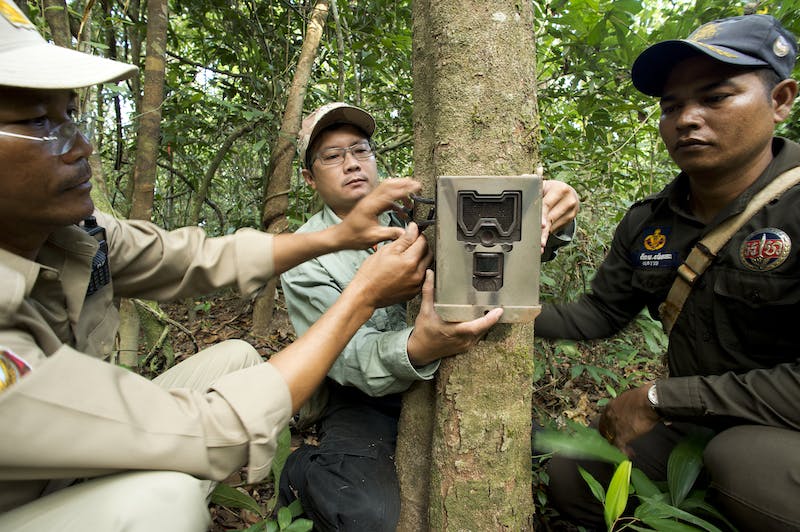 Rangers set up camera traps in the forest to record animals within the Central Cardamom Protected Forest. (© Jeremy Holden)

The roots of wealth

Stunning mountain views, sacred ancient burial sites, surviving populations of a variety of unique species — these are just a few of the many treasures the Cardamom Mountains hold.

Research has shown that this region also has an estimated value of well over US$ 1 billion per year in terms of the goods and services it provides to people, including timber, crops, forest carbon, non-timber forest products, biodiversity, fresh water and recreation, to name a few. In addition, its forests and rivers nourish the massive Tonle Sap Lake system, which produces the highest fisheries yields per hectare on Earth: 130 kilograms of fish per hectare, compared with only 3.8 kg/ha for (similarly sized) Lake Ontario.

Despite these benefits, all of Cambodia’s forests — including the Central Cardamoms — are experiencing significant pressure from illegal logging and forest clearing from slash-and-burn agriculture. That pressure is likely to grow, which makes ensuring the financial stability of the protected area even more important. (Check out breathtaking footage of the CCPF in the video below.)

Created in 2002, the CCPF is Cambodia’s oldest, largest and most successful protected area — and one of the largest in Asia. It protects crucial habitat for 54 endangered species on the IUCN Red List of Threatened Species, provides drinking water for 30,000 people downstream and stores over 190 metric tons of CO2, which roughly translates to taking 41.2 million cars off the road.

The CCPF was the first joint conservation effort of its kind between an NGO (CI) and the government of Cambodia; its success has been due to the incredible efforts of government rangers, local communities and CI staff in the face of persistent challenges like the lucrative illegal wildlife trade, the fast pace of development and the pressures this puts upon the environment.

Through this trust fund, the CCPF is again leading the charge for conservation in Cambodia, providing a desperately needed effective model for long-term conservation. CI and Cambodia’s Forestry Administration have estimated that full cost for the necessary enforcement, community engagement and research and monitoring activities to adequately manage the CCPF is approximately US$ 500,000 per year — almost 10 times the amount the government is able to provide.

To address this funding gap, the new trust fund has already raised US$2.5 million from CI’s Global Conservation Fund and Daikin Industries. We hope to eventually reach US$10 million, which will generate enough capital to sustain the protected forest project in perpetuity. This money will be overseen by CI and managed by a fund committee.

The trust fund provides a secure, transparent and equitable financing structure for investments in successful forest conservation — making it a model for a wide range of donors, including several international corporations which have expressed interest in supporting it. 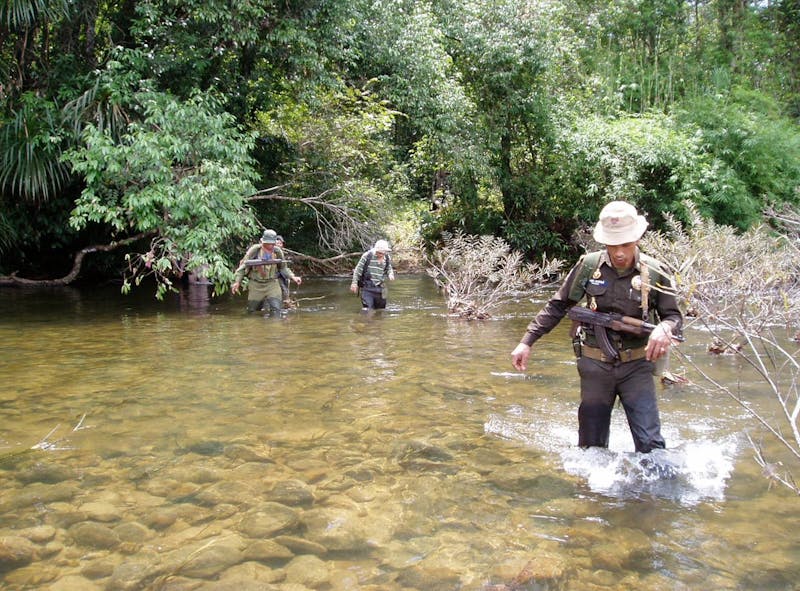 Thinking back to the many times I visited and studied the Central Cardamoms over the last decade, a few special moments stand out. Seeing a golden cat up close on the night of Christmas Eve. The silence of the dense jungle at night, apart from the sounds of nature. Finding undescribed species and animals never before sighted in Cambodia. Watching a baby gibbon joyfully playing in the treetops under the watchful supervision of its mother. Finding a 5-meter (16-foot) python in a pond near our camp. Watching flocks of hundreds of hornbills flying overhead.

And of course, the most memorable memory of all: accidentally walking up to an Asian elephant late one night back in 2005, while I was searching the forest for rare frogs. As I stumbled out of the way, the elephant merely rumbled deeply in its chest to remind me that this was his forest, not mine. Camera-trap footage (see video at top of post) recently captured the largest herd of Asia elephants seen in a decade in that area of forest — undisturbed by poachers, local communities and curious biologists.

In a day and age when the news is full of stories about smog-inducing forest fires and the global reach of the illegal wildlife trade, it’s inspiring to see a place where conservation is working and nature is thriving. As this trust fund gets off the ground, I hope it will show people in Cambodia and beyond that protecting nature isn’t just possible — it’s critical.