Don’t ‘overthink’ carbon removal: 3 stories you may have missed

Editor's note: News about conservation and the environment is made every day, but some of it can fly under the radar. In a recurring feature, Conservation News shares three stories from the past week that you should know about.

1. Illegal deforestation is ravaging the planet and driving emissions up. A new bill in Congress seeks to change that.

The story: From rubber to cocoa, many of the imported agricultural commodities that the U.S. depends on are harvested unsustainably — and contribute to widespread deforestation, research shows. However, due to a lack of transparency in international markets, many U.S. companies are unaware that the goods they are importing were sourced illegally. To combat this, U.S. Senator Brian Schatz of Hawai‘i recently proposed a bill that would restrict market access for agricultural commodities that are harvested from illegally deforested land and help companies ethically source their goods, reported Cara Korte for CBS News.

The big picture: Research shows that decreasing deforestation could help slow climate change by avoiding the emissions released from trees when they are cut down. It could also help prevent future pandemics, experts say.

“The global deforestation crisis is intricately connected to some of the most pressing problems we face,” stated an open letter — co-signed by 29 organizations, including Conservation International — in support of Schatz’s bill. “The degradation and loss of forests is one of the biggest contributors to climate change and biodiversity loss, and increases human exposure to zoonotic diseases such as Ebola and coronaviruses.”

A recent study, co-authored by Conservation International experts, found that investments between US$ 1.5 billion and US$ 9.6 billion could decrease deforestation at a rate that would reduce the risk of forest loss-related disease spillover by as much as 40 percent in high-risk areas.

2. Why a political philosopher is thinking about carbon removal

Carbon removal: A critical tool to fight climate change? Or a license for polluters? We’re “overthinking” it, says a political philosopher.

The story: Since 2018, interest in the need to remove climate-warming carbon from the atmosphere has surged — with opinions sharply split over the efficacy of ready-made natural solutions (such as forests and mangroves) and early-stage technological ones (like carbon capture).

In the latest installment of “The Weekly Planet,” the writer Robinson Meyer talks to Olúfẹ́mi Táíwò, a political-philosophy professor at Georgetown University who studies environmental justice. Meyer writes:

In a tweet last month, [Táíwò] expressed frustration with how carbon removal is often discussed online, comparing the global North’s historic carbon pollution to a milk carton spilling on the floor. Some leftists, he implied, would rather talk about replacing the floor than just pick up a mop and start cleaning.

Editor’s note: Some language blurred as it may offend some readers. 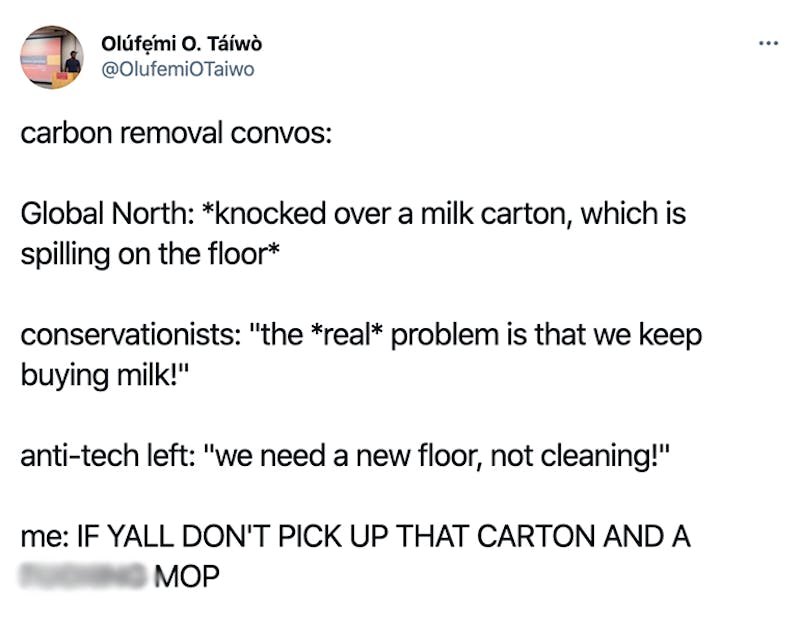 Táíwò’s response: “There are complicated questions, yes, to ask about how that should be happening. Different ways of rolling that out that could go wrong. But just keep it simple. Pollution: bad. Removing pollution: good.”

The big picture: Like so much else, carbon removal has become politically polarized. Táíwò notes in the interview that “the basic problem with the carbon-removal conversation — as I perceive it — is that people are trying to read off of who supports what [to know which position] they should support.”

Instead, he says, efforts around carbon removal should focus on outcomes and be inclusive of whoever wants to partake — even companies from high-polluting sectors. Given the limited time that humanity has to avert a climate cataclysm, efforts by every sector to reduce greenhouse gas emissions are critical.

“We can just accept these two things,” he told Meyer: “Greenwashing is bad. Also, leaving pollutants in the air is bad.”

3. Rivers and lakes are the most degraded ecosystems in the world. Can we save them?

Ecosystems that harbor the lifeblood of planet Earth are as imperiled as they are overlooked. That is starting to change — but is it too late?

The story: A recent study “found that rivers in which fish populations have escaped serious damage from human activities now make up just 14 percent of the world’s river basins, with western Europe and North America worst off,” reports Stefan Lovgren for National Geographic. Noting that nearly all humans live in a river basin, the study’s lead author likened humanity’s treatment of rivers as self-mutilation. “You could say we live in the arms of the rivers, and we’re cutting them off,” he told Lovgren.

The big picture: The comparative lack of prioritizing the protection of freshwater habitats is well-documented — yet, as recent developments indicate, that is starting to change. Tools like the Freshwater Health Index — a framework that measures the overall condition of a freshwater ecosystem, developed in part by Conservation International — are giving  countries a powerful way to manage freshwater ecosystems more sustainably and equitably.

Freshwater scientists are pointing to the UN Convention on Biological Diversity conference later this year as a critical moment for producing a global biodiversity pact that pays special attention to rivers, lakes and wetlands.

“If we don’t make the right investments for our freshwater ecosystems, it’s going to be too late. The ship will have sailed, and we won’t be able to turn around.”