A version of this post was originally published on Mongabay.

I have spent the better part of the past 45 years promoting conservation of primates and their tropical forest habitats, and have had the opportunity to visit and experience firsthand some of the most important sites for primates on the planet.

More recently, I have also begun to promote primate ecotourism (including primate-watching and primate life-listing — see Twitter @PrimateWatcher), based on a birdwatching model, in an effort to stimulate global interest in these animals, encourage much greater visitation and in so doing provide benefits to the local communities living around such sites to make them partners in our conservation efforts.

Back in November, I had the opportunity to visit what I consider to be one of the most interesting and exciting regions for primates in Asia, and indeed in the world: the Kinabatangan River in the eastern part of Sabah, Malaysian Borneo.

I had last been in Sabah in 1979, but didn’t have a chance at that time to visit the Kinabatangan. In the past 20 years, it has become increasingly famous in primatological circles, and rightly so.

During a four day visit, we managed to find 49 groups of primates, representing 10 of the 11 species occurring there. This included six different orangutans, a Bornean tarsier, a slow loris, a group of gibbons, two groups of pig-tailed macaques and amazing numbers of proboscis monkeys and crab-eating macaques. Indeed, the only species we did not see was the very rare and highly elusive Hose’s leaf monkey.

The density of the spectacular proboscis monkeys, a Bornean endemic, was overwhelming. We saw our first group within five minutes of getting into our boat on the Kinabatangan, and they were present along the river and its tributaries everywhere we went. I was particularly pleased to see my old friends the proboscis monkeys once again, with their delightful mega-noses and odd calls, having carried out the first survey of this species all around Borneo back in 1979. 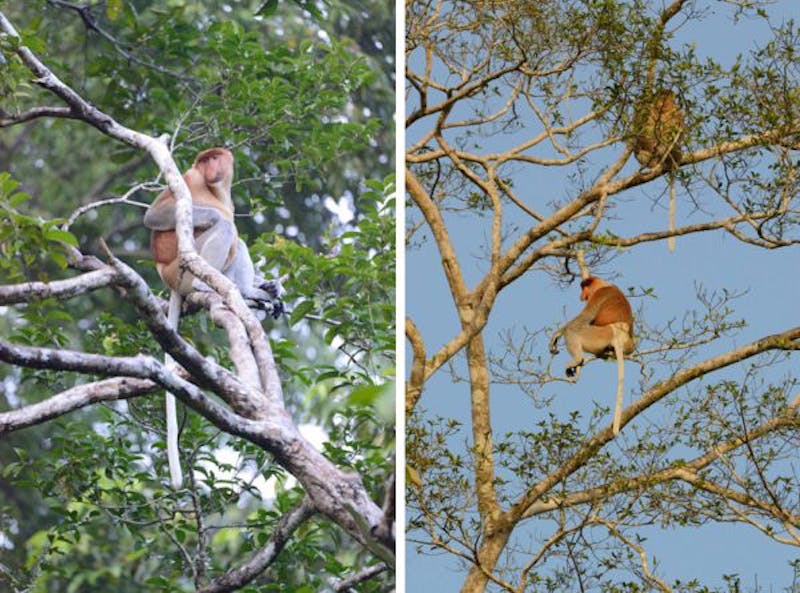 (Left) Adult male proboscis monkey along the Manangul River, a tributary of the Kinabatangan. (Right)
Proboscis monkeys in the late afternoon. (© Russell A. Mittermeier)

We were also impressed with the enormous ecotourism potential of the Kinabatangan. It is safe, inexpensive (you can stay in delightful local homestays at low cost), very easy to access (it took us just two hours from the airport in Sandakan to get to the river and see our first proboscis monkeys and macaques), and rich in other wildlife as well, including eight species of hornbills, many other birds and even a herd of Bornean pygmy elephants. Indeed, to me it ranks up there with some of the best primate-watching sites in the world. What is more, primate hunting, which has decimated primate populations around the tropical world and has made finding and observing them very difficult, does not occur in this part of Sabah, resulting in high primate densities and easy viewing conditions.

In fact, the government of Sabah is actively promoting ecotourism. When you drive out of the airport into town you go through a series of traffic circles. Every one of these circles has a huge model of one of the state’s flagship species, including hornbills, orangutans, proboscis monkeys, elephants and several others. And the gift shops in the airport and elsewhere have orangutan and proboscis monkey dolls, tea and endless T-shirts, buttons, pins and badges promoting these animals — very different from what I observed 36 years ago.

Sadly, the situation in the Kinabatangan and elsewhere in Sabah is fragile. Much of the state, the Kinabatangan included, has been converted to oil palm as in much of the rest of Southeast Asia. The wildlife that survives is largely restricted to narrow strips of forest along the rivers, some of them disconnected from others. Protecting these remaining pieces and reconnecting them wherever possible is a top priority, and the key conservation organizations there are actively engaged in making this happen. 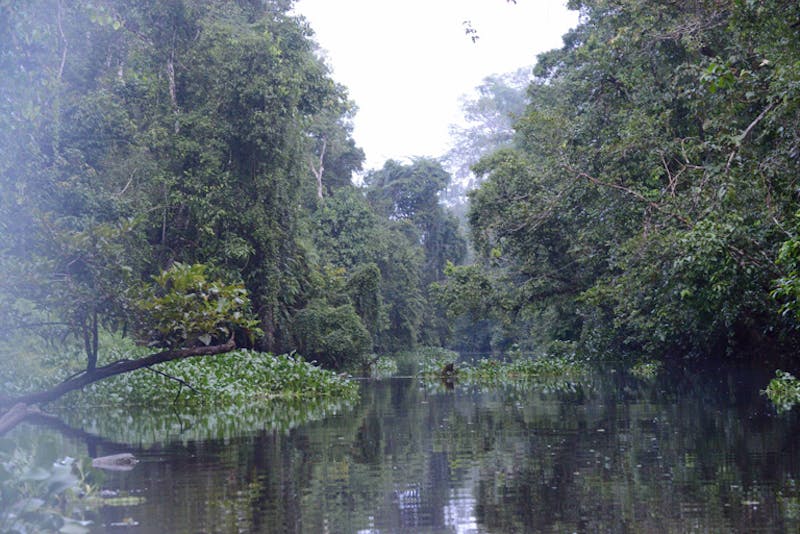 Forest along the Manangul River, a tributary of the Kinabatangan in Malaysian Borneo. (© Russell A. Mittermeier)

During my stay in the Sukau Village Homestay with a charming family, I was intrigued by discussions with villagers about the proposed construction of a highway and a bridge to cross the Kinabatangan River right at this village. Of course, for many people, such a project is a sign of development, and I assume that villagers and the oil palm industry could benefit from this construction. However, I am quite concerned about the long-term impacts of this bridge on the local wildlife and on the booming tourism industry.

The government advertises Sukau as the “City of Biodiversity,” which is terrific. But I wonder what tourists will think in the future when they see a bridge across the river and a highway running right through the village? I also wonder about the side effects of such a road on the survival of species like orangutans, proboscis monkeys, elephants and all the rest of the amazing biodiversity of this region.

As we all know, road construction all over the world has repeatedly been shown to have a strong negative impact on wildlife survival because of increased habitat loss and fragmentation, increased hunting pressure and other kinds of disturbances. Add yet another major disturbance to a region where the forest is already highly fragmented, reduced to small patches, and often degraded will without a doubt provide yet another hurdle for the wildlife of Sukau. This in turn affects the tourism industry and the local communities that are becoming increasingly dependent on tourism for their livelihoods.

However, economic development and preservation of natural resources do not have to compete. On the contrary, more often than not both approaches can be reconciled. In the case of the Sukau Bridge, I hope that the government and all concerned stakeholders will give serious consideration to the long-term impacts of their decision on the natural wonders of Kinabatangan and its booming tourism industry. What is needed now is a compromise that will ensure the long-term well-being of local communities based on a growing tourist market; continue effective protection of the region’s globally important wildlife heritage; and meet the development aspirations of the government.